[Kyle]Breaksea Sound to Dusky Sound is the other inside passage possible in Fiordland besides Thompson to Doubtful. This one is achieved by going through the Acheron Passage on the inside of the large rectangular Resolution Island. 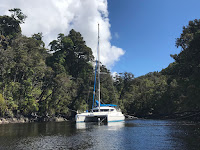 Our day started off with us throwing off our mooring lines in a light drizzle. That quickly turned into sheets of rain slashing at us from all directions. It was not possible to pop out of our cockpit enclosure for even a second without getting completely drenched. From inside, the rain-covered windows and the low clouds affectively reduced the view to a gray look at the nearest shore. The one bonus was that all of the waterfalls enroute were booming down the cliffs at maximum flow. 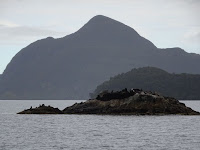 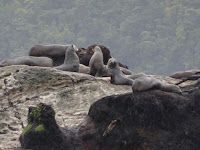 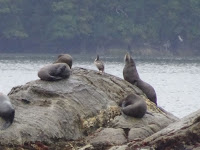 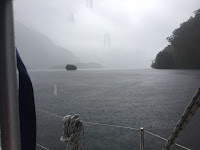 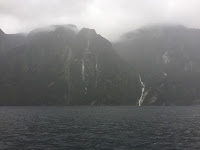 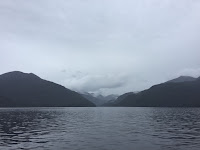 Move from Breaksea to Dusky Sound

While I used the radar to pick our way down the Acheron Passage, Maryanne stayed in the warm cabin and took advantage of our alternator’s electrical output by making a bunch of long overdue repairs to our dinghy cover with our sewing machine. I’m always amazed by how well she manages to work with large items in our little salon.

After a few hours of this, we pulled into Pickersgill Harbor and found our anchorage at Astronomer’s Cove. This is where our lucky run of finding moorings and lines all pre-placed finally ended. We dropped our anchor in the middle of the very narrow outlet to the Cook River and gingerly backed up as far as we dared. Maryanne then deployed the dinghy and, fighting the current, ran a line from each stern to a stout tree ashore while I used Begonia’s rudders and differential power to keep her away from the rocks on either side. It was pretty stressful. There were times when we both thought we were about to crunch a rudder on the rocks we could see on the riverbed.

The whole process took over an hour, but once our lines were secured, Begonia could only bounce around in a square about a meter each side bigger than she is. Now that we could relax, we took the dingy on a tour of the harbor and then went for a hike. 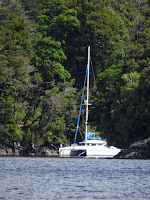 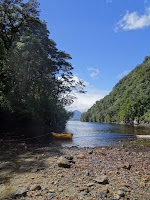 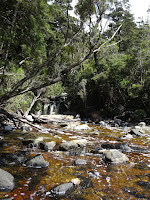 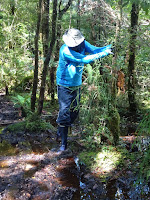 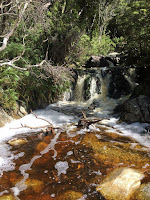 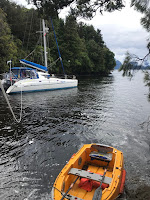 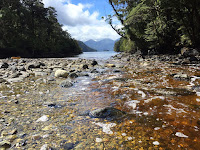 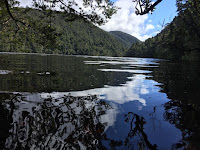 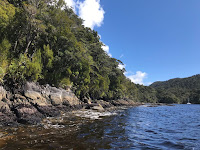 Exploring ashore and around Pickersgill Harbor

When we were done with our rowing tour, we landed the pudgy at a trailhead on the river bank about ten meters from Begonia. It was strange. We were miles from any roads or human habitation in a remote part of Fiordland, which is the remotest, least populated part of the South Island, and our trail started with a big information board. It explained that Astronomer’s Cove was where Captain Cook moored for six weeks in1773 to observe a transit of Venus. The signboard and a brass plaque on the point were placed there to commemorate the occasion. There then followed a really well maintained boardwalk, complete with handrails and everything, that looped through the forest to what appeared to be a large observation platform, like the back deck on somebody’s house. It didn’t actually look out over anything. The view was blocked by trees that had clearly been there since before the platform was built. It was just a random deck in the middle of remote woods. I’m guessing someone at the DOC had to spend the rest of a yearly budget allotment or lose it.

At the completion of our loop, we broke off and took a much rougher trail, more in line with what we would have expected to find way out here. It was boggy and slightly overgrown, but had lots of orange DOC triangles to keep us in the right place. It was slow going, climbing over logs and pulling ourselves out of boot-sucking mud, but we finally emerged at Lake Forster. The lake is the source of Cook Stream, which was flowing under Begonia, keeping any salt water growth on her undersides from taking hold.

Our timing was pretty good getting back. I had just got the dinghy stowed in the davits when the skies opened up again. We were pleased to have been able to avoid it while we sat cozy inside enjoying big, steaming bowls of lobstah chowdah.

Fellow cruisers? If you are thinking of a trip to Fiordland - see our Tips