[Kyle]The howling wind stopped just before sunrise, so we upped anchor and headed to Golden Bay, the anchorage on the backside of Stewart Island’s only town of Oban. 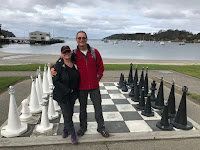 We had planned to base ourselves there for the whole time we were in Paterson Inlet, but the previous two days’ winds had conspired against us, so we had to settle for the one day. We wanted to see the town and all, but we were really hoping to meet up with Dave and Ken before the Round New Zealand race set off again the next day. When Dave first told us about the race, we had assumed we would be tucked up in some cove in Fiordland while the fleet sailed by thirty miles away. We were so thrilled to discover that we were both converging on Oban and would be there at the same time. 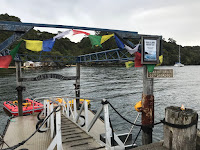 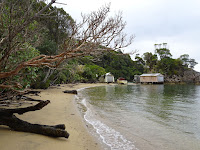 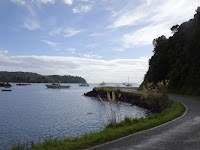 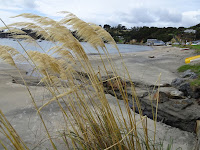 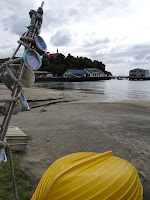 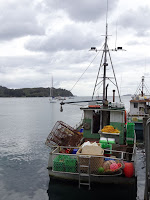 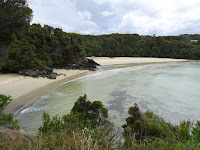 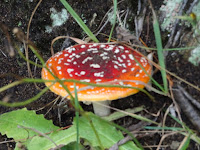 It was good that we only spent one day in Golden Bay. It turned out to not be the best of anchorages. The holding is not so good and there is only room outside of the mooring field for one boat. As usual, we were the only one around, so it was us. Golden Bay is where the water taxis to Ulva Island pickup and drop off and the wake situation as a result is pretty horrible. One guy in particular seemed to make a point of speeding by unnecessarily close and fast each time. I don’t know if he was trying to send us some kind of message or if he was just an oblivious idiot, probably a little of each, but in the short time that we were aboard that day, I decided the thing I wanted most in the world was a live torpedo. If we ever need a water taxi to get from Oban to Ulva, we won't take the blue guy, he’s a menace.

After we’d managed to somehow get ashore in the dinghy without being flipped, we did our best to walk the long way into town along as many of the trails as we could manage. We were moseying along, listening to the Tuis doing their one-bird orchestra and looking for some of the other endemic species when I noticed something large headed straight at Maryanne. It was flying through the tunnel cleared through the thick undergrowth by the path. When it passed half a wingspan over her head, I realized it was a Kaka, one of the local parrot species! By the time I lifted my phone to take a photo, it was whooshing over my head. I spun around and it had disappeared into the foliage, leaving behind a wake of screeches and whistles. It was a brief encounter, but that made my day. I’ve been hoping to see a New Zealand parrot since we left the North Island, but it has been too thick, rainy and buggy to find any. Later on, we found another one climbing around in a tree in the distance.

We huffed our way to the top of the ridge separating Golden Bay from Oban, where it curved around Halfmoon Bay. From up there, we could see the tiny town and a long way beyond. The bay was filled with fishing boats on mooring balls as well as a few local sail and tour boats. After we walked down to the water, we were able to spot the boats in the Round New Zealand fleet.

We got hold of Dave, who was busy on his boat, and we agreed to meet for drinks later. That gave us time for more hiking, the museum, lunch at the pub and even a movie, narrated by the local dog/movie star, who sounds suspiciously Australian. One of the nice local touches at the theater was a pile of crocheted blankets on a seat at the entrance for those who get a little cold. 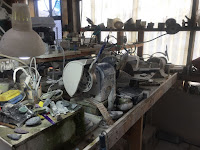 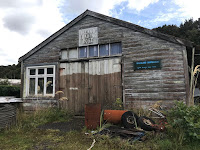 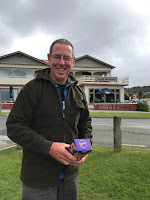 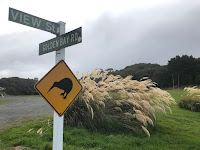 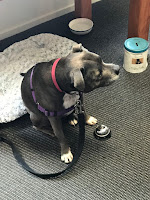 We met up with Dave, and he kindly took a picture of the two of us together (a rare event)
The dog is Lola, who rings the bell at the local cinema (Bunkhouse Theatre) once the movie is ready to show.

We met up with Dave and Ken after all of that and got caught up with all of the news since we last saw each other at Kawau Island. Dave was surprisingly upbeat about his experience with the Round New Zealand race. Unlike the race participants, we’ve been able to pick our weather windows and stop for sightseeing. Begonia is also better appointed with creature comforts than the spartan race boats, yet he had a smile on his face as he talked about trying to sleep in a storm during his off watch while cold sea water dripped on him. The race organizers (including Ken, hence his Favorite Son status on Dave’s race application – Ken penciled it in between ‘my’ and ‘son’) had done a good job of setting up the participants with local host families during their stop. They all had warm beds, hot showers, laundry machines and home cooking to fortify them for the next leg while shore crews tended to the boats.

Dave and Ken had race stuff to attend to, so we set off to hike the rest of the town’s trails on the meandering trip back to Golden Bay. One last pass by the blue guy convinced me to leave to anchor for the night in Sydney Bay off Ulva Island. 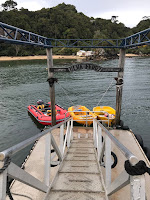 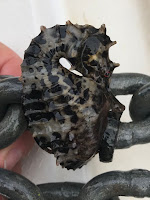 On leaving Golden Bay, we lifted anchor to find this seahorse attached to our chain.
He wasn't happy about being removed, but we gently unpeeled him and returned him to the water
(fingers crossed he's doing fine)
Posted by SV-Footprint at 10:45:00 PM