[Kyle]We were up super early for the trip ashore at Ulva. My weather planning had made it pretty clear that our window for the next leg to Dunedin was going to slam shut promptly at Noon. We needed to be gone by then or we would end up spending an extra twenty-five hours at sea waiting for the next day’s daylight high tide to enter Dunedin. Those particular twenty-five hours were looking like they were going to be strong headwinds as well, so we needed to get going. 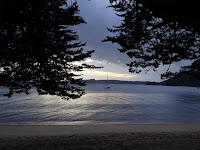 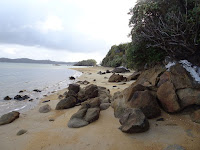 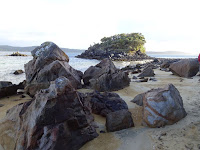 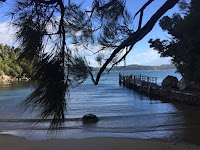 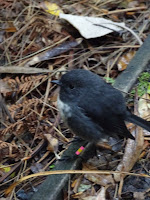 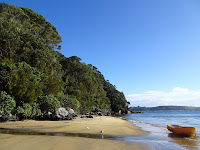 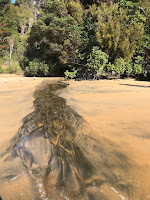 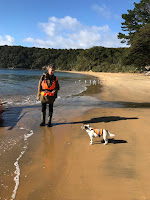 Scenes from Ulva Island, and "Inspector Gadget" - the rat catcher dog (and owner!),

We splashed ashore at the very first hint of civil twilight (landing in the dark is not permitted) and were surprised to be met by one of the island’s caretakers, who was enjoying her coffee on the beach. She checked to make sure we were familiar with the sanctuary’s rules and to give us a bit of a lecture on biosecurity. Once we had demonstrated sufficient knowledge and compliance, we were given the run of the island’s trails.

It was still a bit dark to see much under the canopy, so we walked slowly and listened carefully. We were the first ones everywhere we went since it was a cou;le of hours before blue guy’s first run. We were hoping to find a few kiwis out at the tail end of their night of foraging, but we never came across any. It turns out most of the island’s other fauna don’t really get going until it warms up mid morning, so mostly we just had a pleasant walk in the forest with a background of groggy Tui song. The forest on Ulva is really interesting, though, as the island is old-growth forest that has never been logged.

Toward the end, we did start spotting the occasional Kaka high in the trees, which made up for not finding a kiwi.

Back at the beach, we came across the other caretaker and her dog, Gadget. Gadget is a Jack Russell Terrier trained to sniff out rats and possums. His job is to inspect visitors and their belongings. After getting the same biosecurity lecture as we had when landing, we offered to let Inspector Gadget have a look at the pudgy or even take him out to Begonia. She assured us that if there was any hint of rats aboard the Pudgy, even footprints, that Gadget would have already been going nuts about it. With that, we explained that we were on a bit of a schedule and bid her goodbye. We beat our Noon cutoff by sixty-two minutes!