[Kyle]We had a medium-ish long leg to Lyttelton from Flea Bay. I had four different forecasts that said we would pretty much have to motor the whole way in tailwinds too light to propel even our boat. I was so pleased to leave the protected bay and find the ocean blowing with enough wind to keep us moving smartly. 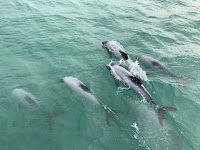 I was happily enjoying the peace and quiet of not having to listen to engine noise and feeling pretty pleased that we weren’t leaving behind the expected trail of diesel fumes when it got even better.

We were then joined by a pod of Hector’s Dolphins. Four of them came up from astern and started playing in our bow waves. Hector’s are usually pretty low key, but these guys seemed to really enjoy splashing around the boat. 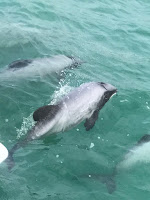 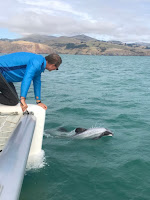 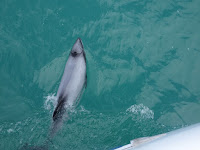 We had hours of fun joined by the playful Hector's Dolphins

At each cove we passed, new Hectors could be seen streaming in. Had their buddies somehow called them to come over? By the third cove, there were too many for us to count, they were changing position so fast. We were able to get to recognize the different markings on individuals and it quickly became clear that our group of ten to fifteen was made up of overlapping pods that would stay for a cove or two and then hand us over to the next group. In all, we had them with us for over an hour. Maryanne had discovered “burst mode” on her iPhone and ended up taking 13,991 photos in a 72-minute period. That’s about three a second for those of you counting. We’re hoping we can get at least five good ones out of that.

{Maryanne: Dolphin photography has always been problematic for me. Burstmode is great for getting that photo at just the right moment that I would miss otherwise - not so great when you have to deal with all those other photos - still - I've not found any National Geographic moments captured} 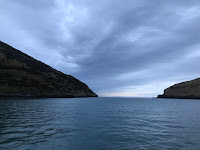 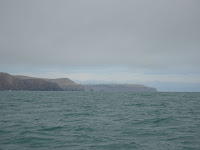 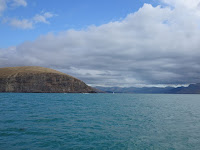 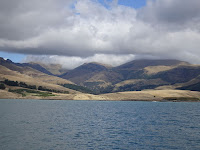 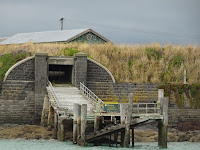 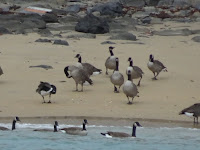 Just before we got to Lyttelton harbor, we sailed far enough into the lee of the land to lose the wind entirely. We were almost there, so we started an engine for the last few miles to our anchorage at Ripapa Island.

When we came around the corner into Lyttelton Harbor, the wind returned. We didn’t have enough distance left to re-hoist our sails, but I felt a little chastened to be motoring through a perfectly good tailwind as we weaved our way through the Saturday afternoon racing crowd as they tacked their way to the entrance. I tried to remind myself that we had just finished sailing further than these boats would go all week, but the optics were not good for the boat with the American flag flying.

We ended up being the only boat anchored in the lee of Ripapa Island. This island is rich in both Maori and New Zealand history as it was a perfect location for defense (As a pa - Maori fortification, and in early settler history as a military fort and a prison). Its most recent fortifications (Fort Jervois) are from the WWI defenses, and it houses some (apparently) rare guns. During the various earthquakes of 2010/2011, it suffered major structural damage and has been declared unsafe to visit and is closed to the public. It remains managed by New Zealand's DOC as a Historic Reserve, but for now padlocked gates block the tunnel entrance. The high walls of the fortress effectively keep out most casual visitors thinking of arriving by kayak, so the birds have the island all to themselves for the time being.