[Kyle]The weather window we would have preferred for departing Lyttelton would have been a nice southerly behind a passing cold front. Instead, a big high pressure seems to have parked itself over the South Island, ensuring that there would be winds from the north for the next couple of weeks at least. Unfortunately, the winds in that sector were not my primary concern with regard to our next leg north. 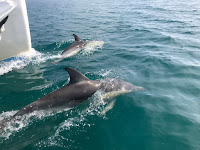 My main worry was the weather at our arrival in the Cook Strait. The tidal range on the western side of New Zealand is about double what it is on the eastern side. This difference goes churning through the Cook Strait four times a day. It’s also the only gap between the mountains on each island, so the winds there are pretty much always way too much. The Cook Strait is deservedly one of the world’s notoriously dangerous bodies of water and it is not to be taken lightly. Even the inter-island ferries that ply the gap year round are not the usual 30-40m catamarans you see everywhere else. They are big, powerful, 250m ships that are capable of handling 60 knot winds and 15m breakers. We regularly saw them pull into Wellington, turn their big, slab sides across a 35 knot wind and dock without the use of tugs like it was a calm, sunny day.

My goal for our arrival into the strait was to try to thread the needle between two fifty-knot storms and arrive during the six hour window when one gathered strength for the next one. In order to do that, we were going to have to tack the whole way. Even then, it looked like we would barely make it. It’s especially hard to calculate an ETA going upwind, so we would have to wait until we were closer to be sure.

We had two nice, smooth tacks in Lyttelton Harbor. Then we were rocking over the swell of the open sea. For the next day and a half, we beat our way up the coast, tacking every hour or two. After each watch, we had made it maybe another fifteen miles in our desired direction. The wind and waves were a bit higher than we would have liked it, so it was a bit too noisy and uncomfortable to relax. 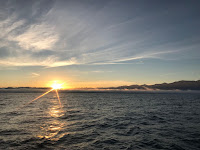 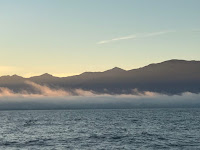 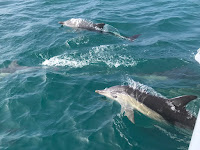 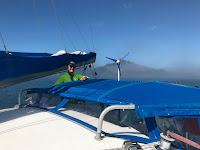 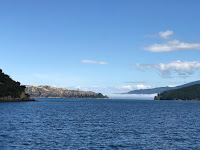 We did, however, have lots and lots of dolphins to entertain us almost the whole way. We saw Hector’s, Dusky and Common dolphins, with no more than an hour or two between groups. As we approached the Kaikoura Peninsula on my afternoon watch, I had one last tack that took us almost to the beach. The dolphins there were joined by lots of birds and even a few Sea Lions. There were also lots of tour boats in the area and I distinctly saw one pod of common dolphins ditch one of them to come over to us, presumably because we had no engine noise or spinning props to worry about.

Sometime in the dark during my subsequent off-watch, Maryanne came down to tell me the wind had gone completely and she was about to start an engine. I would have awakened anyway, had she not told me, but it makes falling back asleep a lot easier if I know it’s for something mundane and not that we just snagged a fishing net or something more serious. In truth, it was a bit of a relief. The dying winds had kept pushing our ETA further and further back. Now we could point the direction we wanted to go and make a consistent speed.

We rounded Cape Campbell, the easternmost point on the South Island, with a following current. The dreaded Cook Strait had no wind to speak of, which we knew couldn’t last, so we kept on motoring towards Port Underwood, where we could spend the night at anchor without having to heave to in the busy strait. Almost as soon as we rounded the corner, we were enveloped in a thick fog that lasted until we reached Port Underwood. When we passed Robertson Point at its southern end, we couldn’t see any signs of land whatsoever, even though it was only an eighth of a mile away. At least the radar could see it.

A mile or so later, we sailed out of the edge of it and it was suddenly a warm, sunny day. The strong winds we had been hoping to dodge arrived, but by then, we only had a mile to go. When we reached our little cove, way at the bay’s head, the high hills had effectively blocked them and we were back to a nice day again.

We had arrived early enough to Port Underwood that we had half a day of nice weather to play. We inflated the kayak we had bought for Fiordland, but never actually used because it was too cold and buggy there. We had a nice paddle around the pretty bay and even managed to chat with a few different locals. 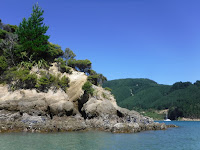 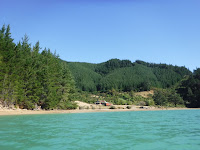 One, a guy named Wayne, who was loading his boat onto a trailer with a friend and a couple of dogs, offered us some of his day’s catch. Maryanne had already pre-made a big dinner for us, so we tried to decline, but Wayne wasn’t having it. We ended up with a Butter Fish. He said they’re a bit of a delicacy because they won’t take a hook. You have to get in the water with them and spear them. They are a bit of a misnomer, though. We checked ours over very carefully and it was made entirely of fish. Thanks Wayne, it was indeed delicious!