[Kyle]We were up early enough to be the very first boat out on Milford Sound the moment it got light out. We managed to make it all of the way to Harrison’s Cove before the other boats started their tours. We had just come through the pinch point at Copper Point when a giant Carnival cruise ship arrived, its decks lined with passengers taking photos. We couldn’t imagine what the “town” was going to be like with three thousand more people there than the busses could bring. 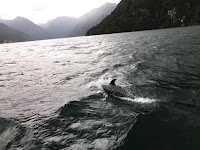 A little while later, when all of the tour boats had reversed and were heading back on the North Wall, the ship reappeared behind us. They weren’t stopping after all, just popping in for a look. We were the only two boats to leave the sound. We both turned south. Their AIS transponder said they were going 19.8 knots, which meant they left us behind pretty quickly. 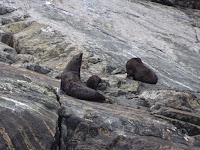 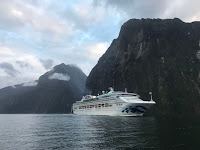 I was trying to go as fast as we could. George Sound is pretty far from Milford and sailing it all in daylight was going to require ideal conditions. This was made even more difficult by Maryanne hinting that she would like to “pop in” and see Bligh Sound along the way. It was supposed to be very pretty.

There is no “popping in” to Fiords. For the most part, you can’t sail in them because the wind follows the fiord. That means direct headwinds one way and direct tailwinds the other. You’d think the tailwinds would be good, but they are strong and so close to direct that it’s very hard to keep from crash-gybing every thirty seconds. That’s hard on everything and also a lot of work, so the best option turns out to be to motor and take the tailwind as improved mileage. Bligh Sound has a couple of big bends. The last one is eight miles in. If we could get there, we could at least see the rest of the fiord, but that is a sixteen mile round trip, which will take three or four hours. That meant everything had to go perfectly for us to get to George with a couple of hours’ daylight left for anchoring.

There was no time for a leisurely sightseeing cruise down the coast. I had to go into the “Advanced Sailing for Dummies” part of my brain and do some real work keeping the sails constantly trimmed for optimal pull. During one slight lull, we even got out one of our spinnakers and flew it for a while. That was a tremendous help in shaving off some time. The airline pilot in me was keeping a running list of all waypoints between us and our anchorage at George along with expected ETAs, latest allowable ETAs and required minimum speeds to meet them. For the trip up Bligh, I had a running calculation going in my head about exactly how far we could go in before we had to turn around and head out. Thanks to our spinnaker run, when we got to the entrance to Bligh (which is named after a boat named after Captain Bligh, Not Bligh himself), I was able to announce that we were GO for a sightseeing tour. 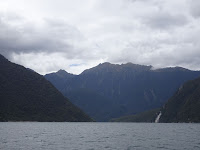 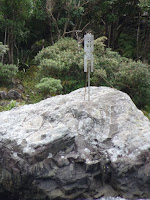 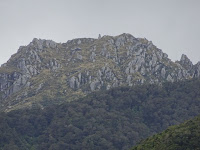 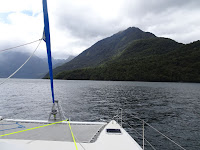 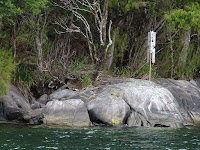 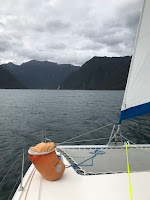 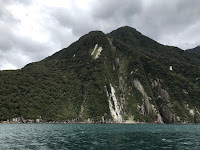 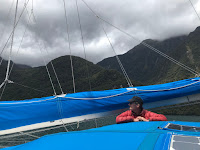 Bligh is very pretty. I’m glad we made the side trip. It was like being in a different era. There were no roads, no fences, no power lines, no buildings or radio towers. The only sign that anyone has ever been there are the four small Mauri signs/statues marking the limits of the marine protected zone within. We didn’t even see any other boats. The whole place was just trees, ferns, waterfalls and bird song.

The wind was up a bit too much for the spinnaker when we left Bligh, but our jib alone gave us more than enough speed to get to George Sound in daylight. Our intended anchorage was all of the way to the head of navigation at Alice Falls. It is a narrow spot and lines need to be run ashore, so we needed to be able to allow enough time to deploy the dinghy and do all of that. 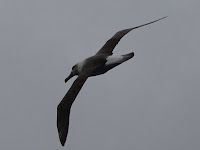 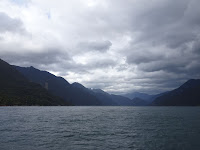 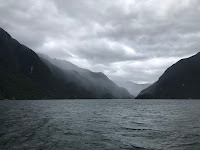 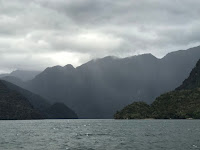 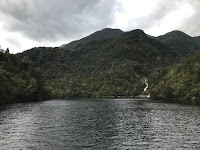 The anchorage at Alice Falls is gorgeous! It was a perfect, calm little one-boat oasis hidden in a little corner from the wind-whipped fiord. We eased in to have a look at the depths and to see what needed doing about the lines. We were pleased to see that some kind soul had run stout lines all of the way across the end of the anchorage, complete with floats and pendants for tying to the boat as stern lines. We inched our way up to them and found it deep enough for Begonia to reach directly with her shallow draught. There would be no need to launch the dinghy. All we had to do was drop our anchor, back down to the line, attach the pendants to each stern cleat and we were finished.

It was about the time we were feeling pretty lucky about finding such an idyllic spot when the sandflies figured out we had arrived and descended on us in a black cloud of blood sucking hunger. I had planned to take Begonia to where we were going to drop anchor and start that process, but the new plan quickly became GET THE HELL OUT OF THERE!

We reversed back into the protective winds of the fiord and I nearly lost control of the helm swatting at them and wincing at the bites of the ones I couldn’t reach. Once we were outside, we slathered on the strongest repellent we had. Then we reviewed all of the anchoring steps again and backed back into them. We now have a new skill: Speed Anchoring.

Once the last line was attached, we dove into the relative safety of the cabin. After spending an hour hunting down and killing (and sometimes being bitten by) the few who had darted in with us in the 2/3rds of a second the door had been open, we were finally able to relax and enjoy our surroundings. It sure looks nice through the window. Fellow cruisers? If you are thinking of a trip to Fiordland - see our Tips