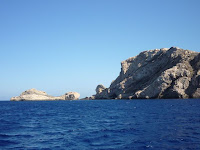 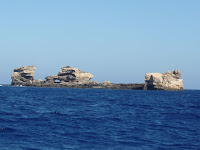 Tortoise Rock? and other outcrops on route
[Kyle]We skipped the usual alarm call and woke when we were ready the next morning for the short journey to the island of Folegandros and Maryanne’s birthday. We roared along the southwest coast of Sikinos, pushed along by strong katabatic winds rushing down the islands steep hills. We crossed the small channel between the two islands, passing by many craggy islets along the way one of which looked very much like a tired giant turtle relieved to have reached shore.

At the port town of Karavostasis we considered mooring stern to the quay but the depths were such that we’d need a LOT of rode and opted instead for anchoring in the shallower bay. It too was a thin layer of sand over rocks but here they were large enough we were eventually able to get a good set on the second try.

We didn’t feel like going through the hassle of deploying the dinghy so we loaded a dry-bag with supplies and swam ashore. We found ourselves just in time for the next bus up the hill to the chora. 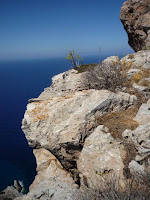 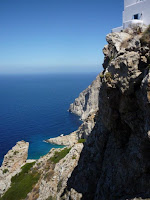 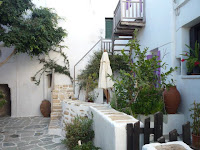 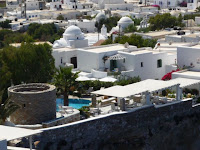 Folegandros
At the top we didn’t find the chora to be that interesting, just a regular-ish town plopped onto a plain. The buildings were perfect with their Greek island white walls, but seemed new and inauthentic somehow, just a little too boxy. It wasn’t until we stepped off the bus that we realized what the big draw was, the plain ended abruptly at the edge of the chora in an enormous cliff plunging vertically down into the sea. Eventually we did find the ‘old’ town and it had a very special character, including wooden balconies and unusual passageways meandering from shady square to shady square. 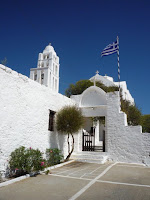 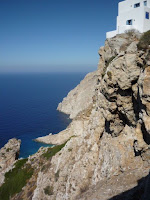 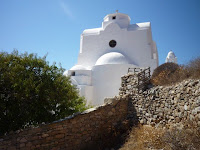 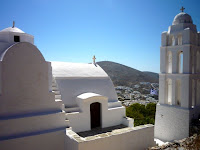 We climbed the smoothed out path up to the monastery for the views overlooking the chora and beyond. We could now see within the walled hotel compounds and spot swimming pools and relaxing tourists sat among the flowers. From there we climbed higher to the top of the tallest cliff on the island and were rewarded with amazing views of the chora and its little cliff below. 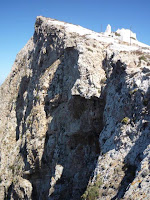 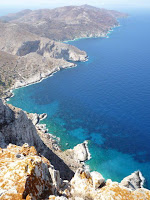 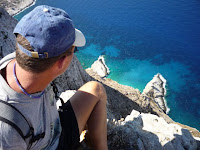 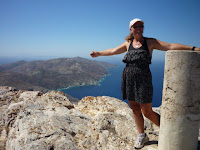 Kyle so loves a hill
After our walk we poked into the most attractive looking hotel and asked if it was OK for non-guests to use the outdoor bar. We sat sipping our beers overlooking the crashing ocean water from the cliff-top balcony. 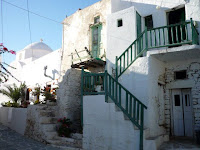 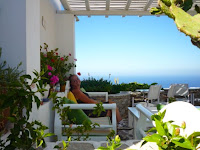 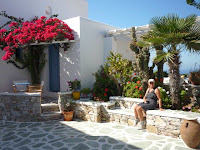 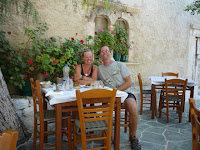 Oh boy, what a life
Afterwards, we had a walk and found an agreeable little restaurant with an irresistibly friendly proprietor. It sat at the edge of a plaza made up of irregular angles. We found a table under a tree backed by a wall of flowers, where we had a selection of every local item on the menu that was vegetarian.

We ate our fill, using the excuse that it was Maryanne’s Birthday to try anything we wanted. Afterwards, we walked off our meal by skipping the bus and walking back down to Karavostasis.

By the end of the swim back to Footprint, we realized we were pretty exhausted, birthday or not, and called it an early night.
Posted by SV-Footprint at 3:56:00 AM

I simply cannot imagine a nicer way to spend a birthday, Maryanne. Nice choice! I also love the picture of the two of you.

I must say,with each post you make, Greece gets even more breathtakingly beautiful. I admit (because I live in a cave of sorts) that I really had no idea of it. I thought of the history of Greece and the artifacts and all, but this? Never. Had no idea. What a spectacular place to vacation. I'm downright envious.