Passage back to Italy 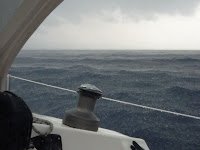 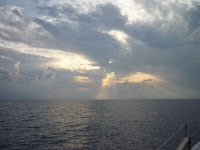 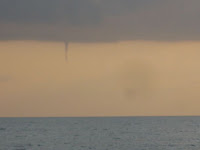 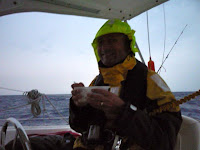 A passage with unexpected weather - Is winter here already?
[Kyle]As soon as it was light out, we unthreaded our lines from the big steel mooring rings at Pylos and headed southwest across Navarino bay. We had the sails up as soon as we were finished with our turn away from the quay. The wind was forecast to be less than five knots, so we had full main and screacher flying and were expecting a slow day.

As soon as we were out in the open Ionian Sea, we were struggling to get the screacher rolled up in building winds. By the time we were five miles from shore, we had reefed and reefed until we had one in the mainsail and two in the jib. We also had to go forward on an increasingly heaving deck to pull the screacher down and stuffed into the sail locker when we couldn’t get it to furl properly.

The wind was now up to near 30 knots. The seas were short and steep making the rolling motion of the boat very violent. We repeatedly had to go inside to recover one item or another that had crashed to the floor. I kept thinking of the forecast received that very morning – 3knot. Why can’t they get that right? The entire first day passed in this manner, with uncomfortable seas in which it was impossible to get any real rest in the off watch an we were left to wonder how long the rough conditions might last.

Late into Maryanne’s first night watch, a call came over the radio with a report of a person overboard at a position about forty miles ahead of us. It would have taken us until the next afternoon to get there, so we kept monitoring. Other boats (nearer and/or faster) did respond. Later on my night watch they had changed the nature of the emergency to vessel not under command, indicating either the boat was drifting or nobody aboard knew how to operate it. We were still headed towards the area. A couple of hours later I heard a conversation between a container ship MSC Healy (the primary responder) and a charter yacht Alter Ego that had come to help. The Healy had come as close as he had dared in the rough seas, but nobody aboard the disabled vessel seemed to make any effort to communicate with him, so he asked the yacht if they could get close enough to shout to them and find out exactly what the problem was. Eventually the yacht came back and said it was not possible for him to get close enough in the rough seas.

Olympia Radio (the Greek rescue service) told both vessels to stand by and that they were sending a helicopter (which ended up taking at least 12 hours to arrive). By late the next morning they were still putting out a general call for assistance and we were getting closer. We were now only 12 miles away and could see the container ship’s bridge with the binoculars. We called and offered our assistance, giving our location and an estimated arrival time. Olympia radio requested all our details, but later came back and said they had enough vessels; we were released from any rescue obligation. Of course we continued to hear the various goings on and even relayed a few radio messages that Olympia radio were not hearing. For some reason the area was at the limit of Olympia’s radio range and we ended up relaying messages for about an hour and were happy to do so. Still it wasn’t clear to us what the emergency was, nor the type of vessel involved. Either we were missing some of the communication or vital questions were not being asked.

A few hours later during my afternoon watch I heard a third vessel report to the container ship that they had the wounded man aboard. That seemed to explain the vessel not under command. Within a few minutes, the call came in that there were now two dead men on board. He hadn’t actually said wounded, but “one dead” in the first message, I had misunderstood the message due to the strong accents. The distressed vessel was to be towed by a fourth boat back to Greece. At this point we learned there were still 30 people aboard awaiting rescue. Now we understood why our little boat would not have been of much help.

When things quieted down, I called the container ship and on another channel asked for any details he could share about the incident. He told me that there were 30 people to transfer to another ship and then they were towing the disabled vessel to Greece, but he would not say much else other than he responded to a ‘vessel not under command’ and the deceased were Ukrainian, but he was vague about what happened or how the two men died. {Once we got to Italy we learned that the boat was a 32’ inflatable with 60 migrants – Afghans and Kurds, no mention of Ukrainians, hoping to get to new lives in Greece. It was damaged in the unforecast storm. There was a report of one person overboard and the two deaths.}. Even though we didn’t know them, it was hard not to think about the bad news their poor families would be getting. The day would never be sunny for them.

The next few days were mercifully tranquil for us. The wind died down and the seas flattened, While it was a struggle to keep the boat moving, the rig was at least not enduring any extreme stresses We slept well on our off watches and ate well now that it was so much easier to cook and clean up. I especially enjoyed the evenings, which were warm and clear and allowed me to spend my night watch gazing up at the constellations.

Things continued in this manner until the last full day when a layer of clouds gradually obscured the entire sky; an unstable system had moved in. At first we noticed (at a comfortable distance behind us) several waterspouts (tornadoes at sea) descending from the bottom of the cloud layer. As we neared the Sicilian coast the sky was lit up with continuous lightening flashes, which we seemed to just avoid as we passed by.

Since the passage across the Ionian Sea was originally planned to be against the prevailing winds I had allowed a lot of time for the crossing. In spite of our slow progress we still ended up with a couple of days to spare. We decided to change our original destination from Messina to the medieval town of Taormina on a hilltop a little further south on the Straights of Messina. The storms had created a big swell from the east so our only available anchorage was a little cove called Mazzaro Bay with a funicular up to the town. The bay was a gorgeous little village and Taormina was visible above on the mountaintops sprinkled there like confectioners sugar. The houses and buildings seemed to occupy the most inaccessible places on the steep terrain.

Our cruising guide book (which we are growing increasingly disenchanted with) indicated that it would be possible to anchor in the southern side of the bay – as soon as we arrived this was clearly not so; the entire bay was full of moorings used by small local boats and was so deep that we would have had to string our anchor chain through the entire mooring field AND run a line to a rock ashore to make it work. A few or the moorings were unoccupied and since it was late in the season it probably would have been acceptable to pick one up. However, as we were winding our way through the mooring field, Maryanne expressed concern since all the moorings were in close quarters and none were used for any boats anywhere near the length of Footprint, we could not be sure they were sturdy enough for us (or even available). We had really been looking forward to being done with the passage and having some time together, and once we saw the beautiful bay and town we were even keener to stay. When we realized we would not be able to stay in Mazzaro Bay we decided to continue on to Messina with a heavy heart – another 6 hours before the end of our passage. 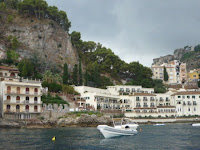 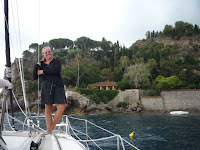 Mezzaro had a funicular up to beautiful Taormina, we were so sad we couldn't find place to set the anchor
On the trip North along the Sicilian coast our luck with the storms finally ended and we were dumped on. It rained so hard for most of the journey that even though we were generally around 300m from shore, no land was visible. It rained so hard that there was a haze above the deck where reflected mini-droplets bounced back into the air after striking. After a long period of trying to tuck in the cockpit and keep dry, I decided to give up, embrace it, and went on deck for a good rinse.

We anchored in Messina at almost exactly the same spot as we’d used heading south in July except this time the water front bars were closed and the beach was empty. We had no intention of going ashore. We were ready to crash.
Posted by SV-Footprint at 7:50:00 AM