[Kyle]We dropped the lines to the mooring ball at Nisis Thirasia and spent the rest of the morning bashing into direct headwinds to the island of Ios. I’d added the island to our route at the last minute since we had a period of headwinds forecast that would pin us down in a few days, giving us time for a couple of extra stops before it would shift again in our favor. Although the trip to Ios was directly into the wind, it was a short trip and would give us a better angle for subsequent days.

The anchorage we planned to use at Ios was at the south side of the island. It was reputedly pretty and much frequented by nudists on excursions boats. When we arrived it seemed a little run down. It would have been OK for our night’s rest, but we were getting used to spectacular. We had plenty of time and we decided to push forwards to another anchorage giving us even more favorable winds and a shorter trip the following day. We decided if we found anywhere we liked as we meandered along the coast we’d pull in and stop there. 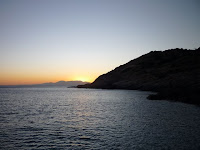 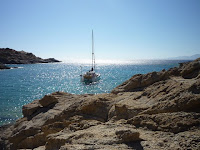 Our 'special' Ios anchorage
A couple of inlets later we spotted a tiny cove with a small deserted sandy beach. The decision was made – just our kind of place. It was apparent on entering the tiny cove that we would either need to set two anchors or run a line ashore to keep the boat from swinging into the cliff walls. The water was clear enough that we could readily see the condition of the bottom as we passed over it. We found a good sandy looking patch, a boat length or two from the beach, dropped the anchor and backed down to set / test it. The anchor dragged. It turned out the bottom was just a thin layer of sand over slippery rock. We tried a couple of alternative spots to no avail and by then I was determined to make the anchorage work as it was getting late and I’d had it with motoring and bashing into the wind for the day. Eventually we found a spot that seemed to work for the main anchor. Our trust in the holding was tenuous though so we decided I’d dive on the anchor before continuing with any of the rest of the process. 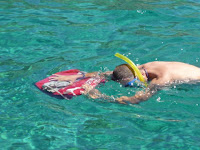 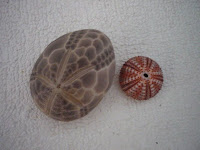 Kyle takes the baby anchor for a swim, while Maryanne makes some seabed finds
I found the anchor with just about a centimeter of its tip grabbing onto the corner of a rock, obviously not good. Searching around with my snorkel gear I found an ideal looking sturdy rock with just the right shape to fit the contours of the anchor. The catch was that Maryanne would have to maneuver the boat over the spot and lower the anchor enough so I could then manhandle it into position, but not so much that it was unwieldy with too much chain. I figured ideal would be letting the anchor touch bottom with perhaps 3’ of extra chain. We then went through the same process with our grapnel anchor at the stern, which I physically swam out and wedged into some underwater rocks at the base of the cliffs. We cranked everything down until it was bar tight, keeping us fixed in position. We were now free to snorkel, hike and relax on the beach to our hearts content.

Several hours later, in the middle of the night, Maryanne was up to use the head. I lay there for a while trying to pretend I didn’t, but eventually got up myself. As I was passing the cockpit door Maryanne appeared like a ghost “we have a problem, the stern line is slack”. She scared the crap out of me! I pulled on the stern line and it came up freely with no anchor attached; the line had chafed through. I knew from our experience trying to anchor that there would be no easy way to reset securely in the dark and without physically going into the water again to find a place to set the ground tackle. Even though the moon was nearly full I knew this would not be possible in the dark. I jumped in the water and retrieved our stern anchor from the spot I’d set it before and when I returned to Footprint we made plans to leave immediately. We had been hugely fortunate that there was not a breath of wind in the cove, we lay exactly where we had been when we went to sleep and the wind was gusting down the valley. Without the stern anchor those same winds would surely have put us into the rocks no more than 3m or 4m away.

My initial plan to sail to Sikinos in the morning daylight was now a hasty escape in the night. We had made only the most cursory of preparation for departure and the trip was too short, and the hour too late, to bother setting the sails.

We arrived at Skala in Sikinos at about 2am where we found a short stub mole to tie stern-to. The anchor mercifully set and held the first time and despite the hour we were now so wired we took a walk around the small harbor town in the light of the full moon.
Posted by SV-Footprint at 3:18:00 AM