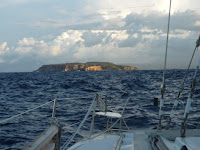 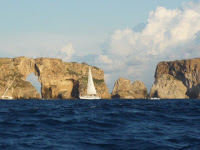 A short passage in choppy seas has us arriving at Pylos around 8am
[Kyle]It was barely light enough to see when we left Methoni harbor in the early morning. The storms of the previous evening had left and the sky was clear with calm winds. As we rounded the corner at the Turkish Tower we found ourselves facing 1.5m seas sent in from a distant storm near the Italian coast. As we followed the coast North we ended up in an uncomfortable slop of reflected waves from the rocky shore intersecting with the swell. There was no pattern nor direction to the chop, it was just miserable. All the while the wind remained light at about 5kt which in most other circumstances would leave us with flat seas and very slow progress under sail (if any at all) so we were doomed to motoring. The trip was to be only 7nm though and after just an hour or so we pulled into Navarone Bay behind the protection of an Sphagila Island to our West.

Once inside the bay the seas became flat. We checked for space in the built but as yet unmanaged marina, we found none, and tied up instead to the town quay with only one other boat. We preferred this anyway as it was closer to the authorities to complete our clearance process out of Greece.

Our water tanks were nearly dry and we had been on serious rations since Methoni. We doubted we had enough water to clean the breakfast dishes by the time we reached Pyros. After clearing in the Port Police advised us to go to the City Hall to organize water at the dock; here a guy came to unlock the water cupboard and allow us to fill our tanks. The port police also gave us phone numbers for a tanker truck to deliver fuel to the boat; Maryanne made the call and the tanker arrived just as we’d finished filling the water tanks. We were both shocked that all the formalities and drudgery for the boat was completed so quickly, this left us the rest of the day to explore Pylos guilt free!

We stepped ashore and turned right (South) heading for the giant fort we’d passed on the way into the harbor, it was an obvious starting point. It was roughly the same size and vintage as the fort in Methoni, but was in much better condition and care (tidier grounds, more information boards and even a leaflet to guide you around the site). This went along with excellent views of both the beautiful bay and distant hills and mountains. This part of Greece is a lot lusher than the lands to the East and the air was filled with the fresh smell of pine forests lining the hills. 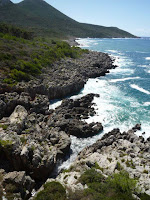 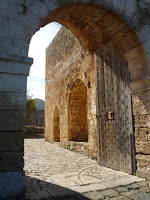 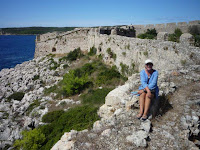 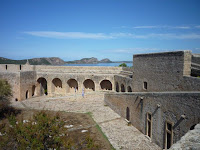 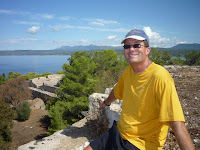 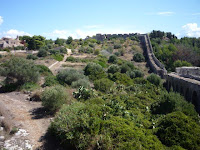 The "New" Pylos Castle with its spectacular views
We took the long route through the fort, meandering as we do. We made a point of walking as much of the perimeter wall as we could to enjoy the views (all but one small demolished section). By the end of our fort exploration we were starting to flag. With little sleep, a light breakfast and the heat of the day I was spent so we headed into town to find refreshments and what was to be our last restaurant meal in Greece and blew Maryanne's birthday money she had been saving.

On the way into the main town we spotted a boat equipment store with colorful supplies spilling onto the street, we immediately planned to go in but before we could even express an interest the owner standing in the doorway called us over to chat. “Where are you from”, etc.. He seemed most surprised that we had a boat and actually wanted to come into his store. He chatted happily about his days in the Merchant Marines mostly in South and Central America and the Caribbean for many years. He talked enthusiastically about our travels and listened intently to our tales. Maryanne pulled out her ever ready ‘just in case I find a boat store’ list, and we were dismayed when we could only find €3 worth of stuff in the store (A replacement dinghy plug). We purchased 2 (so we’d have a backup) and the bill came to €5 came with a smile from our new friend and a cold drink too.

We wandered in the direction of the square that forms the center of the town. Most of the restaurants and cafés in town seem to make up its perimeter. We were looking for something off of the beaten path, though. We passed the square and climbed the steps up the hill on the other side. After a couple of blocks, we spotted a place called Grigoris. A quick glance at the menu posted out front confirmed we wouldn’t be paying waterfront prices. It looked really nice inside and they were boasting a garden. The proprietress spotted us looking the place over so once we were caught, we just HAD to go in.

We were searching around for the best place to sit with an eye towards the garden when we were led into the kitchen for the “menu”. “Let me show you what I have” she said as she pulled lids from pots cooking atop a giant stove and pulled out dishes from the oven. We cooed approvingly at each at which she pulled out a notepad and asked us what we wanted. I’ll have this, that, that and some of that please! We then found a place in the beautiful garden in a lovely setting of hanging vines and shady trees; it seemed a much prettier and more peaceful setting than the waterfront. Since the food was already simmering on the stove our meal was ready at the table within a very short time and bread, salad, wine and water delivered too. 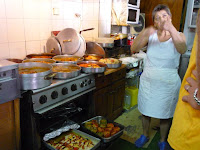 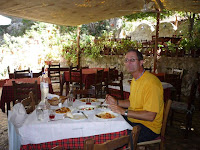 After selecting from the days offerings, Kyle tucks in to his last meal in Greece
[Maryanne]My favorite restaurant in Munich (where I worked for 2 years) is a Greek one where you were invited into the kitchen to pick from the days offerings (no menu). I’d talked about this often to Kyle and was SO excited to find the real deal here in Greece. Being mid-afternoon the restaurant was not busy and only had one other couple as customers when we arrived, a German couple from Munich. They were soon talking with us and were amazed that I knew about the restaurant in Munich and sadly advised me that it closed about 3 years ago! Oh well, things change, for now at least I could enjoy a genuine Greek kitchen restaurant.

[Kyle]We ate our fill leisurely and then a little more for good measure, eventually rolling back down to the harbor and Footprint. We needed to do some last minute passage preparations (for Italy) aboard Footprint while it was still daylight. No sooner had we finished the outdoor stuff, when the sky opened up and poured rain. It rained so hard that we probably could have skipped refilling the tanks this morning and caught enough to fill our tanks had we put our rain catcher up. Oh well, at least the salt is again washed off the decks. There was lots of thunder and lightening around and one bolt hit a lamppost in the parking lot beside our pier – that was loud. Several others hit the hills around the harbor.

After the storm ended the sea was still and the air calm and clear, we took one last walk through the town looking for a bakery to supply ourselves with breakfast for the following day and came home with a few extras too. Mostly we wanted an excuse to take one last leisurely stroll in a country we had become so fond of.

Okay, this actually brought tears to my eyes. Now I'm a sniffling, red-eyed mess just longing to return to Greece for one more enchanted evening and I've never even been there (for real).

Safe passage to you!