[Kyle]Around mid-morning we departed our beach anchorage on the south side of Kimolos. The wind had increased steadily all night as forecast and it was swinging us directly away from the beach by sunrise.

We pulled up the anchor and departed under sail alone. As the anchor came up, the bow swung to the east. We picked up enough speed for steerage and made a slow turn to the south and then west rounding the only other nearby boat like a pivot point.

Once we were clear of the protection of Kimolos, we were in the full force of the uninterrupted meltemi winds. We passed to the north of Milos and then made a slight turn just to the south of west for Cape Maleas on the Peloponessian mainland. Away from Milos, the meltemi veered slightly east of north, giving us a nice broad reach across the long, uninterrupted patch of the Aegean.

I had originally planned the passage to be 16 -20 hours, sailed mostly overnight, to the island of Elefenisos, just to the west of the cape, but the forecast was such that it seemed more prudent to carry on all of the way around the next cape, Cape Tainaro, and continue up the west coast of the Maniot peninsula to a little cove at Dyros (or Diros, depending on which book you read). 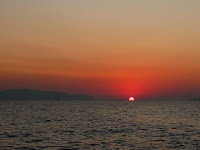 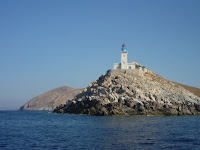 Passage to the Pelopennese
With the Meltemi pushing us, we made excellent time out of the Aegean. We rounded Cape Maleas just after midnight in the company of a lot of heavy shipping. We passed the anchorage at Elefenisos right at the 15-hour mark.

We were out of the Aegean and back in the Ionian Sea, no longer under the influence of the Meltemi. The winds died down and by the time we passed Cape Tainaro, Mainland Greece’s southernmost point, we had stowed the sails and were motoring along the coast toward Dyros. 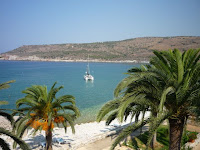 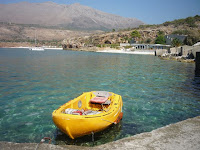 Another Greek anchorage
A couple of hours later, we pulled into the bay and set the anchor in 3m of good sand just outside the range of the handful of people swimming on the beach. It was just past the 27 hour mark. Really big mountains that gradually steepened as they rose from the sea backed the horseshoe shaped cove edged by cliffs. We kept thinking that the scenery looked almost exactly like Scotland. The only thing that was different was that it was greener there and, of course, the weather’s not as nice.
Posted by SV-Footprint at 3:52:00 AM