[Kyle]At Yalikavak, we were the first boat out of the marina in the pre-dawn light. The weather was forecast to be much better before Noon. I also wanted to allow enough time to clear out of Turkey and then be in Greece before their Customs closed for the day, which has typically been whenever business thins out in the afternoon. 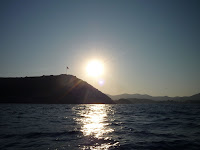 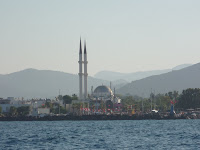 An early start to reach Turgutreis for customs
We motored around the coast to Turgutreis for the Turkish side of the formalities. We tucked ourselves into a corner of their fuel dock out of reach of the pump hoses. It was 8:30am. The guys who came out to meet us in the RIB confirmed (probably reluctantly) that we were OK to stay at the dock to clear customs. They seemed to be worried we were obstructing the remaining 300 feet of empty dock space.

We went to the Port Police, where the only representative told us we would have to wait until 10:00 for the Harbormaster to arrive. We returned to the boat and did our best to stay busy and awake until then. At one point, the guys in the RIB showed up and asked us to move so that another catamaran could come in. I looked at it, saw that it was less than 300 feet long, was a bit confused but asked them where they would like us to move. After much fretting, they decided we were okay where we were, but were still clearly impatient with us because we hadn’t left yet.

At 10:00, we proceeded to the Harbormaster’s office where we were ignored for 20 minutes as he conducted some other mysterious business. He then looked at our papers for about a minute and then told us we had to go to the marina office to have them complete it before he could stamp it (strange). The marina office was not nearby. The walk required an indirect route around the yard and through a shopping center. At the marina office, we were told the guy who does customs paperwork for them wasn’t in so we’d have to go to a Yacht agency just a little further for paperwork completion. Thirty minutes and a bill of 65 Turkish Lira (about $65) later our paperwork was ready for the Harbormaster. We gave her a 100TL note. She said she didn’t have change and didn’t take cards. Hmm, a cash-only business that doesn’t have change?

Maryanne went on a hunt for change. The kindly agent decided we were trustworthy so I was allowed to have the paperwork in the meantime. Walking back to the Harbormaster’s office, I couldn’t help but wish I had known we would have to go through all of this at 8:30. Then we could have spent THAT hour and a half on this.

The Harbormaster again looked at our papers for a minute, gave them an officious stamp and sent me to the Port Police. One more stamp and it was over to Customs. At Customs, I stood behind the glass at the desk, behind which three men sat having morning tea and reading the paper. They were far enough behind the glass that I would have had to pound hard to be heard. I wasn’t ready to be that guy – the impatient American, so I did my best to look conspicuous and eager. Over at the Port Police counter about twenty minutes later, a woman with a huge sheaf of papers was getting them all stamped. She was clearly an agent working on behalf of a charter company or a crewed yacht. When she was done, before she got to the Customs desk, she opened the door to their office, went in and plopped the papers on one of their desks. The men dispersed from their tea break and returned to their respective stations. At this point, the man doing the bulk of the stamping looked up at me and waved for me to come in with a look that said I was an idiot for not knowing that. So... it wasn’t one-way glass..

I’m sorry, buddy, but I am NEVER going to assume it is okay to walk by the counter and let myself into the back office of Customs. I imagine that if I did that in Newark on my next trip to work, I would end up with a whole room of guns pointed at me. You’d hear from me again three to five years after that.

Stamp, stamp, stamp, stamp again. A little more stamping and we were finally free to leave Turkey. I met Maryanne at the fuel dock, where she was spending our last Turkish Lira on a jerry can of fuel and a couple of well received ice-cream bars.

The weather hadn’t quite turned on us yet, but by the time we were about a third of the way to Kalymnos, we were beating into increasing headwinds. It wasn’t too bad. We only needed one short tack that cost us half an hour before we could make directly for the harbor. 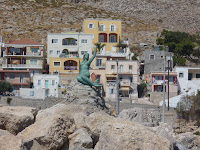 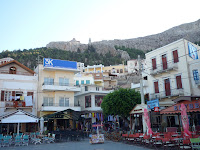 Back in Greece
We managed to arrive mid afternoon and I was still hopeful that we could complete formalities that day and enjoy the town. We found a spot along the wall, dropped anchor and backed up to about a boat length of the wall to snub and set the anchor. It dragged. One more attempt had the same result. Now we know why that space was available. We moved to the next open space and the anchor again would not set, twice. On pulling it up the second time at this location we found dangling from our anchor another, we were mortified, a real faux pas had been committed, but we were still within our lines for our space. It turned out not to be from either boat beside the space we were hoping for but from one 2 boats away (although we didn’t know that at the time). We attempted to make contact with the likely boat ashore, where the captain appeared on the foredeck watching us and not too happy. We still had his anchor up (hooked on our own), and felt the best thing was to keep tension on it (to stop him drifting backwards into the dock) and try and communicate. We yelled, used all the sign language we could to try and persuade him to communicate with us on the radio, but he just kept staring at us. Eventually we dropped the anchor and motored in to offer any assistance necessary. Here he stated the obvious (you pulled up my anchor) and here too we learned it was not his anchor but the boat the other side of him. We offered help and suggested the other guy crank on his line and check to see if it would re-set. No worries, it’s fine he assured us.

We picked a third spot even further along. Two attempts there failed. We decided to try a completely different patch of harbor on the south side. We had been avoiding it partly because it wasn’t as pretty, but mostly because it would require laying the chain down in a strong crosswind. It is very hard to back up straight in a crosswind until the anchor is there to help, but you can’t set it until most of the backing up is done.

On our second attempt, we finally got the anchor to hold. It has never taken us that many attempts to set the anchor. The whole process took us over two hours. We did a quick search on the internet tubes later and found LOTS of people complaining about the holding on Kalymnos. Apparently, the harbor was built as a smooth concrete basin with a layer of axle grease topped by a thin layer of ball bearings. The thinking was that this was to decay into a super sticky mud but, so far, no dice.

We hastily rushed to the Port Police, where we were charged €15 for a receipt for €15. We were then told we had to go to the regular Police in the middle of town since we had just entered the country. The directions were long and vague at the same time. We found it with the help of a couple of friendly locals on the way, who steered us back onto the right path.

It was an awful walk. We were thirsty, hungry and exhausted from the long day, the sail and especially hauling the anchor chain up and down so many times. We desperately ached to plop down in one of the many restaurant seats on the way and order a couple of cold ones and a pile of food, but formalities must come first, so we trudged the hot streets, squinting into the late day sun.

The Police were mercifully efficient. Soon we were trudging the other way. At least we were spared from the sun.

Back at the Port Police, we were told everything else we had to do would have to wait until tomorrow after Customs opens at 8:00. We had a long gap between islands the next day and I had really been hoping to see Kalymnos smartly receding over the horizon by then. I guess not.

Still, now we could do nothing but enjoy a Greek meal at one of the many waterfront restaurants and relax.
Posted by SV-Footprint at 12:14:00 AM