[Maryanne]Shhh... Don't tell Kyle, but while he has been busy working hard and earning a living, I've been pretty lazy and loafing around. Apart from my earlier trip to St. John's, I have read 5 books while he has been away, and done a little more exploring.

Pirates of the Caribbean - Stage

Firstly the local (one show a year) Amateur Dramatics society (Fincham's Follies) put on a one night only show - a spoof "Pirates of the Caribbean"; along with spots of local talent. It was lighthearted fun, an outdoor (sit on the grass and watch) production complete with failing lights, occasional feedback from the sound system, and some very amateur acting - great fun, despite the obvious technical issues. All proceeds went to charity and at the interval they auctioned the amazing backdrop (painted by 3 talented folks) and got $1850 US for it - WOW!

I also took a tour to the Dow Hill Interpretation Center over by Shirley Heights. My guide book reports the multi-media show as "missable", but I had plenty of time and thought I'd give it a go. Unfortunately the show was not working, but I was glad I made the trip as the views were great, and hey, I needed the exercise! Making use of yet more colonial military buildings, and with great views of English Harbour, it was worth it, even without the official show. 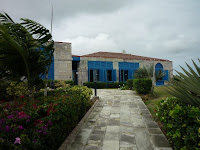 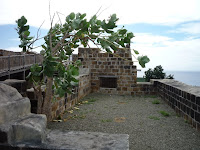 On the way I came across this peculiar plant. At first I thought it odd to find a Scottish thistle (I hadn't noticed any thistles here at all so far) but then I realized the flower belonged to the plant, and I was enthralled - it seemed so out of place - what is it? I just call it a tulip thistle, it is so pretty. If you know what it is, please do tell me! 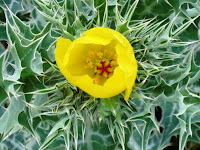 I took an unauthorized route to the Interpretation Center (so I didn't have to row/walk so far). This took me into the (closed to the public) grounds of Clarence House. There is some confusion about when it was built: Some say it was built in 1787 for Prince William when he was based here (later to become King William IV); others that it was built around 1805 for the dockyard commissioner. Until very recently it has been the country residence of the governor-general. In 1960, Princess Margaret spent some time here on her honeymoon. It was obviously a very grand residence, at least until recently as in September of 1998 two hurricanes severely damaged the roof and other parts of the building. The house and grounds appear now to be overgrown and abandoned. All the inside is gutted with no floors in place. Although renovation work clearly started, it looks as though nothing has progressed for several years. It was a prefect place for me to sit and rest, I could enjoy the views of English Harbor while reading a book sat in the window of the top floor in the shade of the veranda, with a breeze - all to myself - Not a bad way to spend an hour. 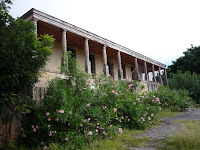 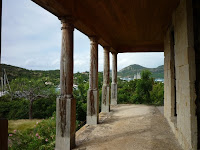 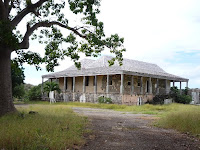 
Of course I have done a few chores, but nothing too strenuous (well the one that was too strenuous I gave up on). I suddenly realized that not only is it December, but Christmas is right around the corner, I had to rush to turn out Christmas cards and get them mailed so they might (possibly) arrive on time. Kyle returns to the boat on Saturday, and already has a full schedule planned, I don't know if I'll be able to keep up with him based on my current pace of life. Ahh, but I'll try.
Posted by SV-Footprint at 5:55:00 PM

A day late, but HAPPY BIRTHDAY Kyle. Hope you two are enjoying time together again after you returned to the cold US to work. Looking forward to hearing from you or seeing a new blog when Maryanne is finished loafing. Ho Ho Ho.

i'm so jealous of your idyllic resting spot at clarence house! what a splendid way to spend an afternoon. as to shirking your duties, don't worry - your secret is safe with me :)