[Kyle]We first had to clear into Nevis (pronounced Nee-vis), so we rowed ashore to the dinghy dock by the ferry terminal and immediately were given a good impression of the place. Maryanne asked directions for a dumpster (for our trash) and the official was very nice, directed Maryanne as to where to find the dumpster, and then asked if we had just arrived? "Yes? Then once you've dumped that, come back and I'll give you directions to Customs, etc.". 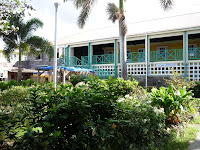 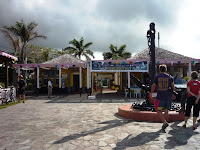 
At customs (2 desks, 4 chairs and a printer), the officers were very nice; joking with us and each other. Having just computerized their system - we were amazed that having given them the name of the boat, they knew where we'd come from and all our details - our arrival paperwork was quickly checked, printed, paid for, and handed over! Creepy on the one hand, but convenient in its efficiency on the other. The next stop was immigration (the local police station, several blocks away). Maryanne was keen to start on her tourist hit list (with a visit to the tourism office we were passing), but I had to remind her that we were not yet legally in the country.

At the police station the highlights were:

The officer at the counter cleared us in quickly and welcomed us to the island with a smile.

From there we went to the more stereotypically surly Port Authority office in order to pay a week's mooring fees for mooring balls that didn't exist in our planned anchorage, along with other harbour fees. 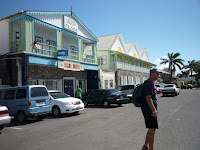 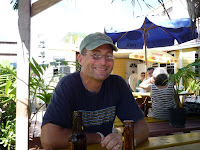 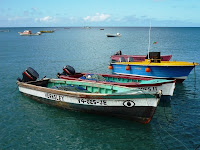 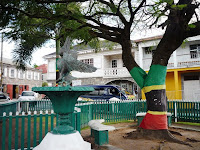 Charlestown Views - and Kyle gets to relax too

Since we still had most of the day remaining, Maryanne pulled out her list of "must see" sights in town. 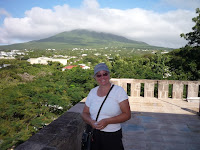 View from Balcony of Bath Hotel 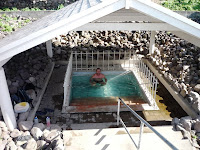 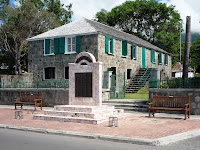 
All these things were within a 15 minute walk from the center of Charlestown. We were pleased to do so much (including visiting with the Tourist office to pick up a good Island map).

Once we were done with our tour, we returned to the boat and moved it north up the shore to Oualie Beach (NW side of the island) just in time to enjoy the sunset and plan our next few days of exploring.

[Maryanne]Nevis has been fun so far, and has a character of its own. Everyone has been really friendly. If we even look slightly lost then we get several offers of help. The kids all wear school uniform. We checked out the town library where there was a week long special Obama presentation.
Posted by SV-Footprint at 10:28:00 AM

Email ThisBlogThis!Share to TwitterShare to FacebookShare to Pinterest
Labels: Nevis

First, thank you for all the photos--they are wonderful! I know it takes a while to upload them and I appreciate it. The one of Kyle at the table is one of the best photos of Kyle I've seen in a long time. And Maryanne, you look healthy, wealthy, wise, fit and trim and very suntanned. This island hopping life suits you both. What a lovely place. Can't wait to hear more. Sending love