[Kyle]Since the previous day had not been quite strenuous enough, we decided to circumnavigate the entire island by bicycle. Both the guy at the bike shop and the Tourist Information office assured us that the shore road circling the island is mostly flat and not too hilly at all. Even though we were more than at touch saddle sore from the previous day's ride we figured we'd stop a lot on route and we'd be fine.

After a brief stop in Charlestown to clear customs, and to add to our stock of drinks at a supermarket, we headed anticlockwise along the ring road to our first planned stop <<>> reputed to have a crucifix with a Black Jesus. As soon as we got out of Charlestown, however, the road began to climb in the manner of the lines at Disneyland; just when you think you are almost to the top/front, you come around a corner and there is more hill/line! This went on for miles, all the while huge dump trucks were barreling down the road going both ways, leaving us little room for the weaving back and forth that is characteristic of climbing a hill at half a mile an hour on a bicycle!

We made it to the church and found it locked, and although we attempted to peep through all available windows, we could not tell in the dim light what the guy on the crucifix looked like (apart from miserable). We used the excuse to have a drink and a snack and rest before returning to THE HILL. It turned out by then, that we had barely even started. We kept assuming we were almost done (remember everyone told us it was flat) but people hanging out on the road sides, or passing in their trucks, kept laughing at us. During one particularly steep part, Maryanne had a nice conversation with an old man who was taking his daily walk. He warned her that it was dangerous to cycle on the hill with the big trucks, Maryanne told him not to worry, she wasn't cycling, mostly just pushing her bike up hill. 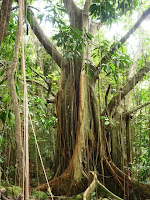 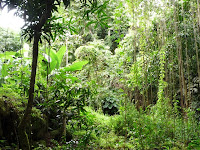 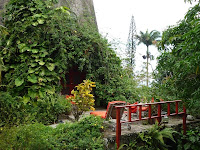 Gentle Hike through the "rain forest" at Golden Rock Plantation

Eventually, we finally did reach the top of the hill, and enjoyed a screaming coast down the other side. Occasionally stopping to take a picture or inspect something of interest. One of the first things we came across was our next planned stop - Golden Rock Plantation, itself up another impossibly steep and long hill. The appeal of Golden Rock was it was reputed to have a large resident population of Green Vervet monkeys (elsewhere on the island you can see them, but they are unpredictable in location). We obtained a trail map from the office and went into the forest, which of course started off with a steep hill! We didn't see any monkeys on the hike, although the forest was beautiful. At the end of the trail we were feeling pretty tired and hungry and found the restaurant too tempting to pass up. The plantation is just gorgeous, the restaurant offered views of the Caribbean from about 2/3rds of the way to the top of Mount Nevis. The food was also excellent. 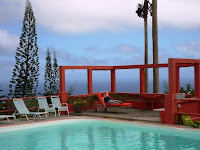 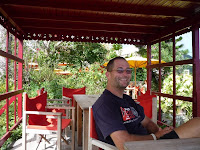 Just as we were finishing our meal, the woman from the office came looking for us to tell us that there were monkeys down the hill, and once we'd done eating we should stop by her office and she would make sure we'd not miss them. On the way down the hill you could not miss them. There were monkeys everywhere, however, they were still very skittish and hard to get close enough to get a good photograph. 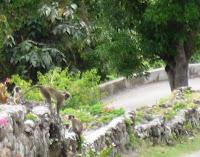 
[Maryanne]The Vervet monkeys were brought to the island as pets, centuries ago, and have since happily multiplied and are now fully wild. They exist only On Nevis and St Kitts, and I was especially keen to see them while we were there. I was so excited and happy to finally see them. The story is that the French brought them to the islands, however another guide book suggested that "French" was just a derogatory term used for the English that brought them over - who knows!

[Kyle]Next stop on the tour was the Nevisian Heritage Museum, which was reported to to do an excellent job of the pre-columbian life. However as we arrived, they were closing the gate (too early for closing time, but I guess it was soap opera night!).

So then we just continued on our anti-clockwise circuit via the shore road, nearly all coasting down hill which was a great relief. One extra thing on our "to do" list was to sample the "killer bee" cocktail at the Sunshine beach club. We could barely stand the extra two mile ride past Oualie beach to get there, we were so stiff and saddle sore, but we did it. When we got there, we found it was closed, totally locked and shuttered up, we were so disappointed. We returned to Oualie beach and asked the barman to give us a special (after they confirmed they could NOT make us a Killer Bee). Maryanne had a mango margarita, and I had a strong rum punch, even though we didn't need any help to sleep that night.

Again, we found ourselves having a lively conversation with the other folks at the bar, this time with an English diver/marine biologist (sound like anybody you know?). Afterwards,  we rowed back to the boat and collapsed in a heap - leaving preparations for our next sail to the following day.
Posted by SV-Footprint at 10:32:00 AM

Email ThisBlogThis!Share to TwitterShare to FacebookShare to Pinterest
Labels: Nevis