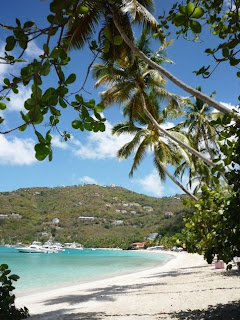 [Kyle]For our 2nd day of sailing, we planned to go the short distance to Cane Garden Bay on Tortola. To extend the sailing, we circumnavigated Guana Island first, which made for some lovely downwind screacher sailing (the screacher is our light wind sail) past green hills and white beaches until we turned on the motor for the tricky entrance into Cane Garden Bay. By the time we got the anchor set it was still only mid-afternoon. I did the obligatory anchor check with the snorkel gear, which turns into a half hour excursion as I get distracted by the wildlife. Still recovering from work, we spent the rest of the day relaxing aboard.

Maryanne, however, (Maryanne, not me folks) was itching to go for a run, so the following morning we set up the sailing rig (more stalling) and sailed the Portland Pudgy to the dinghy dock. Maryanne chose a flat in-town route, while I headed over the hills to the adjacent Carrot Bay. The hills here are CRAZY! I guess since they don’t get snow or ice they figure they can build the roads straight up and down, a switchback is really bad news with the pavement becoming almost vertical on the inside of the turn. I made it over to Carrot Bay, but the worst part was having to turn around and return over the same hill once I was already exhausted and sore. I swore afterward (as I always do) that I’d never run again. 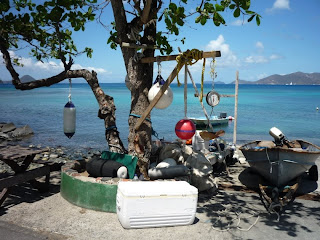 I was game for returning to the boat and collapsing, but Maryanne wanted to see the Callwood distillery; allegedly the oldest continuously operating rum distillery in the Eastern Caribbean. When we turned up I wasn’t sure we had the right place, it was very run down looking but there were homemade “Callwood Distillery” signs that helped. We entered and found a guy decanting rum into bottles, and asked him if we had the right place and was it correct they did tours? Yes. He returned to filling his bottles and after a long uncomfortable silence Maryanne asked if we were in the right place for the tour, we were told to come back later (after school was out) as someone else does the tours. We took a walk around the building and the small grounds to take some pictures. As we were getting ready to leave, our tour guide was there!

It was an excellent tour of a ramshackle conglomeration of outbuildings – we were amazed the equipment was still in use, and the building still standing. I had the feeling an Ozark mountain moonshine shed would be in much better condition by several orders of magnitude. When Maryanne remarked that the place looked as though it was about to fall down, the tour guide, totally straight faced, replied, they were maintaining the “authentic” nature of the distillery. To us it looked as if they were not maintaining anything, and we were amazed it was still standing. It turns out that our tour guide, Mikey, was very knowledgeable, and although still at school, seemed to be actively involved in the process, he was friendly and likable. The tour ended with a generous sampling of the various aged and spiced rums – pretty good. We purchased a bottle for 10 year old dark rum for the boat. 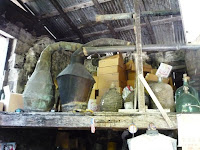 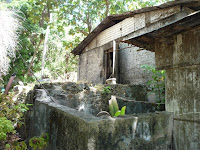 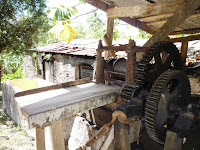 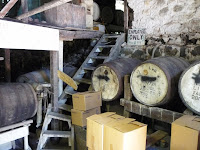 [Maryanne]Apart from a small patch of sugar cane for the rum, the area around the distillery also had a number of different fruit trees, bread fruit, banana, and various others, the guide also pointed out an almond tree. Later that day, with my new found knowledge, I spotted an almond tree in the graveyard and I collected a few fallen almonds to try them out. They have husks like a coconut, and are really difficult to break open (there may well be an easy way but we didn't find it). I eventually handed the job to Kyle and he bent one of our good kitchen knives getting into them! Still, fresh, raw almonds do taste good – worth the effort. 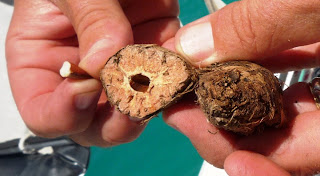 [Kyle]We finished the day wandering around the town (a delicious ice cream, checked on fuel prices, etc). It was surprisingly quiet and low key considering the number of boats in the anchorage (mostly rafted up power boaters from Puerto Rico)

The next morning, I was extra eager to get to our next anchorage which I knew would be deserted. However, Maryanne wanted to go for yet another run. In spite of my insistence that I’d never do such a thing again, while Maryanne repeated the flat town route, I headed back up the same hill that had nearly killed me the previous day. This time however, at the fork in the road, with a choice of down or more up, I chose up. 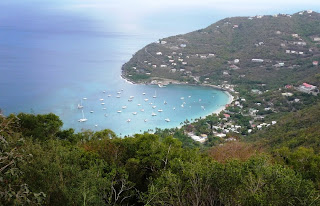 This eventually got me almost to the top of the highest hill in Tortola. Luckily, I’d taken the camera so I have proof and great pictures for all my altitude effort. Something weird was going on in Cane Garden Bay once we’d finished our runs. I came around the last overlook and noticed that the entire beach was set up with chairs and awnings. Maryanne said that unlike the day before, the tourist office was now open, there was a public market (t-shirts and tourist tat), the public restrooms were now open, the place was transformed. Once we saw the busses start to arrive, we realized. CRUISE SHIP DAY – our cue to leave. How sad that the cruise ship tourists never got to see the sleepy true nature of the town. It looked as though all the kids had the day off school to run the various tourist attractions (jet skis, banana boat rides, etc).

There are a number of boats for hire in Cane Garden Bay and it seems the birds know which ones are unlikely to be disturbed
Posted by SV-Footprint at 1:00:00 PM

Beautiful shot of the bay, Kyle - worth the torturous climb. Maryanne, glad to hear you've stuck with the running - will you join Kyle for the up hill version once you've tired of town??