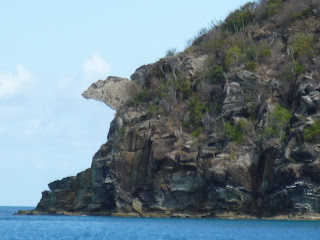 Guana Island, we assume, gets its name from this distinctive rock outcrop.

[Kyle]After a loooong stretch at work, which included some of the worst days I’ve ever had flying (delays, grumpy passengers, grumpy agents, no fun), I managed to get home to Tortola half a day earlier than I’d expected. My flight from San Juan had been delayed due to a fuel pump failure, so I called Maryanne and told her I’d be late. Somehow however, we managed to arrive at the originally scheduled time and I cleared customs surprised to not find Maryanne waiting for me. I then remembered that I said I’d be late, so I started walking towards the dinghy dock thinking I’d meet her on route. What I found at the dinghy dock was the dinghy, but no sign of Maryanne. On the way, some local drunks tried to encourage me to go to the bar, sure I was lost; I persuaded them I was not lost, I was just looking for someone, and I had no desire to get drunk with them, particularly since I was in uniform – dying to change into something more comfortable. I turned around and walked the 2 minutes back to the airport and found Maryanne in the waiting area, still waiting for my plane to land. Oh, and did I mention I had a 28lb backpack on my back, full of all the items Maryanne had arranged for me to bring back to the boat. No big deal. I was glad to see her, and it was SO nice to be home.

Guana Island's White Bay. Private but pretty to look at

Since we had a surprise “extra” day, we decided to travel to White Bay on Guana Island, which was just a couple of miles away. We spent the night there rather than yet another in Trellis bay. White bay is on the private Guana Island on which trespassing is forbidden. However, they have a beautiful blinding white beach to anchor beside and of which to enjoy the view, plus an unobstructed view of the sunset; a nice alternative to the more crowded Trellis bay. Our guidebooks mention White Bay as a minor but pretty anchorage. However, once we got there, we found it nearly impossible to avoid anchoring in the coral bottom. Worse, the bottom looks like sand, and the areas of coral are highly camouflaged. If it were not for our draft and our ability to tuck into very small spots, I doubt we’d be able to do it, we don’t recommend Guana Islands’s White Bay – go elsewhere and avoid damaging the coral. Once secured, however, we enjoyed an easy day of getting caught up on sleep, and returning to island time.

I had an enjoyable snorkel almost to the forbidden beach, the highlight of which was seeing a sea turtle patrolling the anchorage for its dinner. Maryanne and I both made a special effort to be paying attention at sunset, and were fortunate enough to both see the elusive green flash. A perfect ending to my first full day home.

[Maryanne]Today was Easter Sunday and Kyle had kindly managed to find space in his luggage for a decent supply of chocolate... Mmmm, very yummy. A view is so much better with chocolate.
Posted by SV-Footprint at 12:24:00 PM