[Kyle]We had wanted to spend an extra day on Muck (pop. 38) and explore the trails but the winds conspired against us. The wind was forecast to swing to the southeast at about 25 knots. This would have made Port Mor very uncomfortable. We also had a long way to go to the northwest, so that would be just perfect for that. 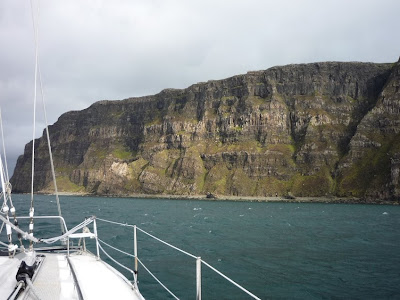 More stunning Scottish coastlines
We left Muck and headed north for the gap between the islands of Eigg and Rhum before turning northwest toward Neist Point, on the western side of Skye. The sailing was downwind but rough, making us wonder again just what exactly we were doing out here. I noted a blue spot just above us. It began at 10:06 and was gone for good by 10:12. That was the extent of our good weather. Once in the lee of Skye, we got a bit of a reprieve and had a nice sail under huge green and gray cliffs. We came around Dunvegan Head and immediately were hit with 30 knot winds racing down Dunvegan Loch. We turned into the wind and fought our way to the head of the loch. It had been forecast to blow a severe gale the next day so we found a spot offering us protection and once again put out our whole rode.

As we put out our anchor, we were met by Allen, a local boatman who braved the slashing rain to come out and offer advice. He knew the cove we were in well because he runs daily seal tours, mostly within it. We found out later that the Sunday Times had once voted seal tours from Dunvegan as the ‘#1 British Day Out’. Our harbour was lousy with seals doing all manner of cute seal stuff. All day long, we saw people stopping their cars and lining the shore with cameras and binoculars trying to get a look at them. We were anchored right in the middle of the whole spectacle. What happy luck.

We listened to the forecast and found that the rest of the afternoon was supposed to be good so we rowed ashore and had a quick walk into Dunvegan town to have a look around. We finished off a couple of errands and even managed to squeeze in a quick trail. I especially was getting worried about the approaching weather and was eager to get back to Footprint. I was worried that soon I would not be able to row to the dinghy against the wind and we would end up trapped ashore.
Posted by SV-Footprint at 9:57:00 PM

I don't know why I thought once you arrived in Ireland and traveled up to Scotland, your perils would be over. Easy sailing. Safe. Fun. Beautiful. Time to read and relax. How messed up was that???