[Kyle]We got up early when we were finally too sore to sleep and struck camp just before sunrise {Maryanne: We may be of an age beyond camping??}. A couple of miles down the road, we spotted our first two kangaroos. I have been to northern Australia before and had only ever seen wallabies, the kangaroo’s smaller cousin. Kangaroos are big! I can see why you wouldn’t want to hit one of them. Our just looked at us sheepishly and then bounded into the bush. They hopped about ten feet per bounce and as soon as they got into the bushes, they crouched down and became invisible. I was surprised by how skittish they were. As soon as they saw the car, even if we stopped ¼ mile away, the whole group would head into the trees. It is very difficult to get close enough to photograph one.

Anyway, we drove south toward the coast and the land of the great trees. This part of Australia is home to some of the world’s biggest trees. Only the two species of California Redwood are larger. Here they have the red and yellow Tingle trees and the taller but slightly less massive Karri trees. The name Tingle actually comes from a Noongar (aboriginal) word for red, making them another sort of redwood. The big difference, though, is that these trees are deciduous. California Redwoods have massive trunks and relatively short branches. The Australian trees have long branches that spread out and cover huge areas of forest floor, giving the impression that they are even bigger than they are. These trees are big, though. The Karri tree, for example, grows to 85 meters (284 feet).

Our first stop in the forest was the tree top walk in the Valley of the Giants. This was a really well done walk along spans that rose up to 40M (132 feet) above the forest floor, allowing us to get right in the canopy with the birds and see the world up there. We also had stunning views of the surrounding mountains. After the canopy walk, we took a long walk along the floor. Having spent so much time in the California Redwood forests, I got a real sense of déjà vu. In many ways the experience of driving and walking through these forests feels the same. After our floor walk, we headed back up into the canopy again. We were just about the last people there and had the whole place to ourselves, this time in the warm light of the sunset. 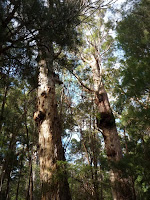 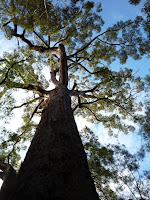 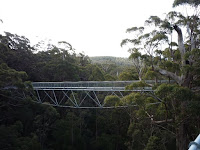 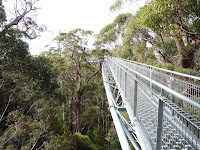 Tree Top Walk - Valley of the Giants
Uh, oh. Sunset again. We beat a hasty retreat to a campsite a few miles away and managed to get the tent up by dark. I tried to build a fire using gathered kindling and chopped wood that the forest service provides. The kindling burned fine but, try as I might, I could not get the logs to burn. I spent hours of frustration trying to get a real fire going but had no luck. Eventually, Maryanne tired of the exercise and went to sleep. I kept at it for a couple more unproductive hours before I gave up as well. I couldn’t figure out what was wrong. I’ve built a few fires in my life and I think I understand the process pretty well. I had a bunch of yellow-hot coals in the middle. The wood would burn for a bit and then the flames would gradually go out. The next morning, I realized they had given us tinglewood. Fire is part of the Tingle’s natural process. The oily leaves burn like crazy but the trunks only tend to burn just the outside, leaving the living part of the tree safe. Most of the older trees have trunks that are completely hollowed out by fire but continue to thrive as the live cells are still hidden under the fire resistant bark. I suppose if we had a blow torch or a whole lot of magnesium, we would be able to get the wood hot enough to burn. Otherwise, it seems like a cruel joke intended to keep people from building fires.
Posted by SV-Footprint at 12:09:00 PM

I think the idea of the treetop walk is fantastic. How often do we get the opportunity to see the world as the birds do without having to actually climb the trees.

I love the redwoods and the sense of agelessness I have amid the primevial beauty of the forest. This, I feel,is how the world looked before. Before man. Before civilization. Before anything. The earth as it used to be. These trees no doubt provide the same peacefulness. Do they smell good? Are they protected by the government? Have they been mercilessly logged as our own redwoods have been?
Yes, Maryanne--there does come a time in your life when camping is simply not so much fun anymore. The ground is harder than it used to be, the rocks sharper, the cold more chilling. Alas, you may have reached that stage in your life ;-)


Kyle, you must have felt defeated by your firebuilding efforts and I know you don't take too well to being defeated. IN anything. I'm glad you finally discovered the fault was not yours, but the nature of the wood you were using. But it was doubtless a cold and dark night nonetheless.

Awesome tree top walk! I would love to do something like that some day; it would no doubt beat the Swiss Family Robinson fake tree house attraction I enjoyed at Disneyland, circa 1971.