Leaving Skye (for a time) 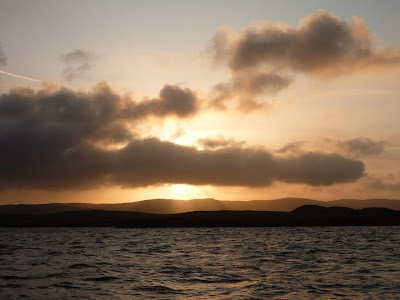 "Nice(?)" early start
[Kyle]In order to make the tides work, I decided we had to get going by first light. This, of course meant we (I, mostly) had to get out of bed way in the dark in order to get some coffee in me and get our checklist finished by the time we could see where we were going. As I went outside wearing a headlamp to do some of the outside items, I was met with another headlamp. Something was strange about it. From the deep recesses of my memory, I recalled seeing something like it before, but where? Then I remembered! I saw it in Bermuda. It was the Moon! Weird. {Maryanne: Finally the cloud cover had left us! Also, I think I'd happily call myself a morning person, but NOT however when that means leaving a perfectly nice warm bed to head out into the cold.... Hmm, I'm lucky to have such a considerate husband.}

We motored out of the anchorage, bid goodbye to the seals and hoisted – get this – full sail. We then went skimming out of Loch Dunvegan on a flat sea. We passed as close as we could to the coralline beach of the day before but could not get too close as it was low tide. It looked lovely in the morning light with a backdrop of rugged hills. Just above the hills was a thin layer of cloud that was blocking the morning sun. I dared hope that once the sun cleared the cloud, we would actually get to see it ourselves.

We turned north out of the loch (the opposite direction to the one we came). This put us on a nice dead downwind point of sail. All of the apparent wind and wave seemed to cease and we just floated beneath the cliffs of northern Skye.

The sun didn’t come out so much as we just outsailed the cloud. It made everything seem less gloomy. This time of year at this latitude- almost 58 degrees north – the Sun barely passes 30 degrees above the horizon at local noon, just like the dead of Winter in New York. There was light but no appreciable warmth. Even though we had been sailing by this point for hours, I kept thinking it was really early because the sun was still so low in the sky. I kept waiting for the heat but it never arrived. I had to keep reminding myself that, although it was cold, I should be ecstatic that it was not raining.

And rain it did not. We sailed across the entrance to Loch Snizort. A ferry from the Outer Hebrides dodged us at a polite distance. We rounded the northern tip of Skye. On the other side – the eastern side – the cliffs receded to show an impossibly rugged terrain. There seemed to be no order to the mountains. They looked as if they had been tossed carelessly there in preparation for building proper mountains, like a kid’s lego set two seconds out of the box. There were slopes of every possible angle. There was even one place where you could be taking a nice flat stroll in a meadow, admiring the ever changing shades of gray of a Scottish sunset, when – aaahhhh! – 2000 foot drop.

More beautiful scenery
We sailed across the Minch over to Loch Gairloch on the mainland. On the way, the wind decreased further and further until, eventually, we decided to dig out the screacher and deploy it. I was tremendously suspicious and kept my head on a swivel for signs of wind on the water. I’ve been operating under the rule that, in Scotland, one should always be prepared for forty knots of wind at any time. That would be, uh, problematic, with the screacher up. Fortunately, it never happened. I daresay it ended up being an actual nice day of sailing – no rain, no gale, no spray in the face, no nuttin’.

We picked up a mooring at Badachro. Wow! The anchorage was speckled with pretty rocks. It reminded me very much of parts of Maine or the rockier Boston harbor islands, only with big Scottish mountains as a backdrop. 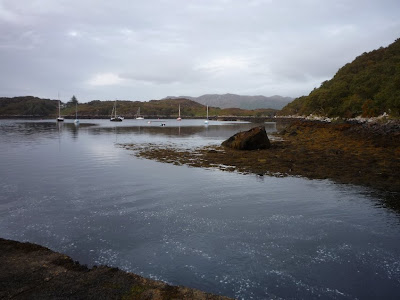 Badachro Harbour
We rowed ashore and went to a rather disappointing pub for a drink and a dessert, which was really a ruse to get at their wifi. The pub was nice, but they were rather shorthanded. People in the restaurant would wait an hour for a menu and then have to come into the bar to order. The poor barmaid, who was a Polish student on her last week of an exchange program, was swamped. There was a nice, entertaining argument about sailing between an opinionated old cruiser and a nattily dressed racing guy who were clearly winding each other up by pushing just the right buttons. I resisted the urge to jump in. Their wifi was operated by little mice carrying cards with 1s and 0s back and forth in their teeth – slow, man, slow. We had intended to stay for an hour or so but by the time we were done with the most basic internet stuff, it was well into night. I was a complete zombie. I actually considered going out to the dinghy and curling up for a nap while Maryanne uploaded pictures to the blog. The good news was that, when we left, it was high tide and we were able to get home by rowing over one of the larger islands that had blocked our path on the way in. Good thing. I think we were both asleep within five minutes of stepping aboard the boat.
Posted by SV-Footprint at 12:06:00 PM

I love your description of how Scottish wifi works ;-)