[Kyle]We took a day off from travel and spent an extra day in Fort Augustus. It was super cold the next morning so it took us a while to get up the motivation to climb out of the nice warm bed. Once we did, though, we decided to be fit and healthy and go for a run along the Great Glen Way towards Inverness.

It started with a really steep climb out of Ft Augustus to a nice viewpoint of western Loch Ness. Just after that, Maryanne timed out but I kept going for a while. 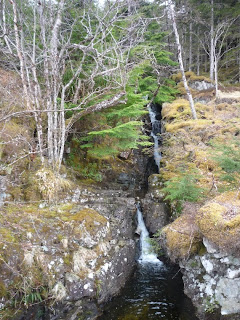 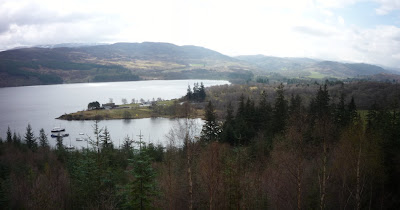 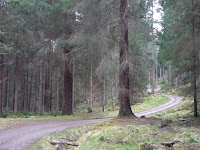 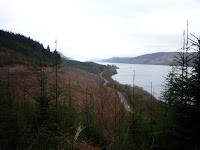 Sights from our run on the trail
After leaving the canal towpath, The Great Glen Way joins up with what appears to be mostly logging access roads. The parts of the roads where cutting hadn’t taken place were nice, but the trees blocked any view. Once at a clear-cut area, I could see the Loch alright, but the road itself was a horrible mess. The sunshine that we started in had turned into a cold, sideways rain and the lack of trees for protection made those parts of the run awful.

I was pretty surprised that despite the difficult hill running I actually didn’t feel too bad when I got home. After a nice hot shower, I was a new man, except I was pretty hungry. No problem. One of the canal side restaurants was offering soup and crusty bread for £2.90. That’s how they get you in the door. Once inside, everything smelled wonderful and, as I said before, I was hungry. We got out of there for a bit over £2.90, but it was worth it.

After dinner we invited a lone sailor from another boat over for tea and conversation. Wow! It turns out he had been pretty much everywhere. He has sailed across every ocean in the world. A couple of years ago, he even completed the Northwest Passage over Canada. Last year, he got arrested by the Russians after an aborted attempt at the Northeast Passage. On his way back to Norway, ice forced him into close enough proximity to Russia that they nabbed him for being where he wasn’t supposed to be. Since he hadn’t planned to land in Russia, he figured it wasn’t necessary to bother them about being in their waters.

He took up sailing because he “was getting on a bit” and thought it would be less strenuous than what he was doing before: technical mountaineering. He had lots of those stories, too. 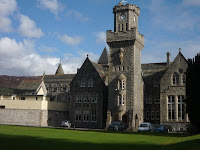 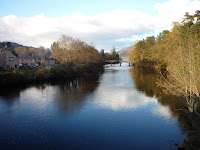 Other sights from Ft. Augustus - the old monastery (now converted to apartments), and the old trellis footbridge across the river Ness - waiting repair before usable again.
Posted by SV-Footprint at 5:09:00 AM