[Maryanne]Helmsdale is a small village, the modern form of which was purpose built in the early 1800's by the local land owners (The Earl of Sutherland); a place to move tenants from their straths as part of the Highland clearances (once the gentry discovered that sheep farming was more profitable, and those darn Highlanders were in the way!). The Sutherland family which owned the area (although lived in London) decided to create the harbour and use the population they moved to the village to create a fishing industry. Helmsdale harbour became the biggest herring fishery in Europe (catching over 40% of all British caught herring. In its day it was a very busy harbour indeed. The old harbour, along with an even older castle ruins was pretty much lost once the "new bridge" was built to accommodate the A9. 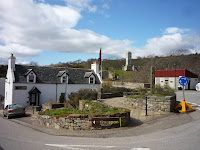 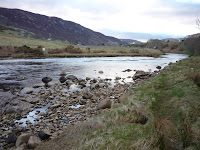 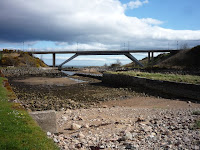 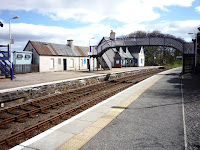 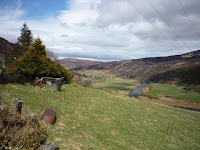 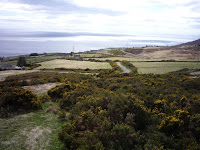 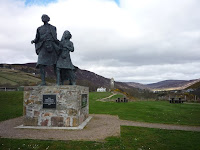 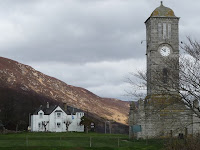 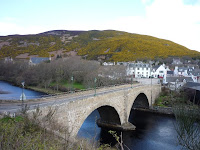 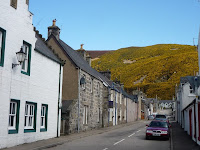 Pretty little Helmsdale
The original bridge (still standing, and still in use) across the river was designed and built by Thomas Telford (yes, the same guy that designed and built the Caledonian Canal - we are seeing a LOT of Telford's work lately! The town even has it's own railway station and 2 football teams. There was a short lived gold rush nearby (you can still pan for gold and might even find a bit of gold dust for your efforts), and as we've mentioned before there is impressive salmon fishing here too. Despite all it seems to offer, it feels very much off the beaten path. When we arrived Kyle struggled to understand some of what the Harbour master was saying (despite it being a mild Scottish accent). I joked Kyle was still learning Scottish, and the harbour master warned us that there was Scottish, and then there was "Helmy"; we had much to learn.

Helmsdale, as a place name, conjures up a Yorkshire location for Maryanne, not Scottish sounding at all (Glens are much more Scottish sounding than Dales)! However it seems Helmsdale is based on old Norse, and hints at its Viking settlement past. The area has been named Helmsdale since the 13th century.

[Kyle]The weather was such that we knew we were going to be based in Helmsdale for a couple of days before decent sailing conditions for moving on North. This provided a perfect opportunity for a guilt free sleep in; we got up mid morning and were pottering about the boat, drinking coffee and enjoying a lazy breakfast when the Harbour Master showed up to collect his fees. We were in luck; he offered us a special rate, with 2 nights for the price of one. He didn’t know the exact rate for us, so after a bit of small talk Maryanne asked him if it was OK to go to his office later to pay the dues? A look came over his face that made her think that was not good, she asked is there something you needed to do? Would another time be better? He sheepishly lowered his head and said no, they weren’t very busy at all right now. Once we finished with our long slow breakfast, we paid our dues and then did EVERYTHING there is to do in Helmsdale (well, practically everything; we did not play golf).

The first thing I did, of course, was to look at the steepest road I could see from the boat, and head off to climb it. Maryanne gave me “the look” but followed along anyway, providing me with wonderful company. As we climbed our way upwards to get longer and longer views of the surrounding area. 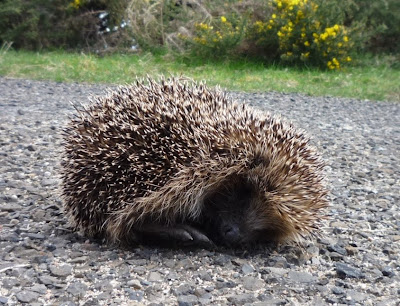 We spotted this little cutie on our morning hike - take a good look at those feet, he did not seem to want to move off the sun heated road surface, and who can blame him eh?
Once satisfied that altitude progress was no longer possible on our current route, we turned around and made our way back to Helmsdale where, now hungry, we visited what is (reputedly) one of the best Fish and Chip shops in Britain (or one with great marketing at least). Clarissa Dixon Wright, of Two Fat Ladies fame, says that La Mirage in Helmsdale is definitely in my top six. I’m not sure I would put it in my Top 6 but it was food in a too generous helping, inexpensive, and we were hungry – problem solved.

After our late lunch, we headed for the Timespan museum, and spent a few hours there. There we found exhibits covering the history of Scotland, particularly the Sutherland region, and Helmsdale in particular, there was also some impressive glass work in an upstairs gallery. It was very well done and we learned a great deal; we were both impressed with the quality of the exhibits given such an off the path town – they were doing a great job and we were glad to enjoy it. Tired from the hike and the standing around looking at exhibits and art work, I was ready to call it a day, but there was one more thing I wanted to do. We had noticed the beginning of a coastal path heading North and wanted to discover just how far it went. We stopped by the visitor center looking for a map or guide for the trail; here the lady that popped up apologized they were out of printed maps, but she would draw us one for a circular hike that started along that same coastal path, climbed Navidale Hill, and returned via the West of the town.

We stopped by first at Footprint, it was low tide and we wanted to check on the water depth. All was well, Footprint seemed to be the only boat completely afloat. We picked up a soda and a granola bar to keep us going. On our way out, we spotted the Harbour Master standing on the break wall, and went over to find a crew dredging. The water was so shallow that they just drove a dump truck and a digger out into the river and start digging. Neither of us had ever seen such a dredging operation (normally it is done from a boat or barge), and the Harbour Master assured us that they should not normally be able to do it this way either! Dredging was long overdue it seemed. We made a mental note why it was important NOT to leave anywhere near low tide. 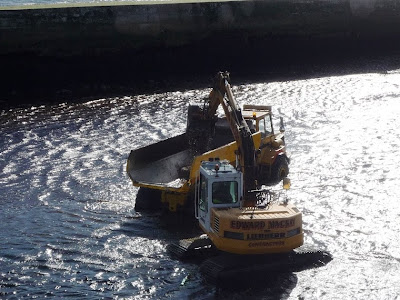 Dredging operations at low tide - Yikes!
We followed the path along the coast and in a fairly short time were rewarded with views of Navidale Bay with its cobbled beach, kelp filled sea (much exposed at low tide) and a backdrop of cliffs. The path backed on itself and climbed the hill to an old cemetery set beside a picturesque stream and with beautiful sea views. The path then briefly joined the A9 road, and broke off to head up Navidale Hill. The trail started on a grassy path lined thick with gorse bushes. Early on we reached a junction not indicated on our hand drawn map; the choice was to continue along a mild slope, or climb fast and steep up the hill, naturally I chose straight up, Maryanne reluctantly followed. The path took us directly to the top of the hill, above the gorse line and into the heather and peat. Views of the village below, the valley and the coastline made it well worth the effort. Maryanne found a path to the west and forged on, but as we left the gorse and approached the top progress was made difficult due to buffeting by very heavy winds. Winds were so strong that we had trouble staying on the trail. The wind, fortunately blowing up hill, kept pushing us off the trail and into the heather; we had to struggle (even with gravity on our side) to make it back down. We had no wind instruments (both of us wished we had our little portable meter) but we both felt the wind had to be at least 60mph – we could barely stand in it. We forged along the ridge top for a while, until it became apparent that the trail was leading too far away from the town, and still making no effort to descended – it could be heading for the west coast as far as we could tell, we’d made a wrong turn. We backtracked, and with great effort in the wind, returned to our original junction to find the correct trail, a nice wide grassy trail, walled by thick gorse in full yellow flower again. A mile or so later we found ourselves deposited on a proper road, leading back into town. Having hiked much more than we planned that day, and feeling no guilt now for our earlier Fish and Chips, we happily made our way back to Footprint, and flopped down on our settees for a well needed rest. 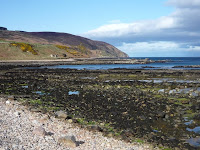 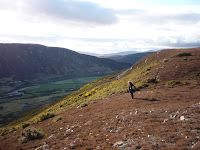 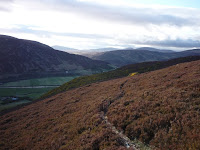 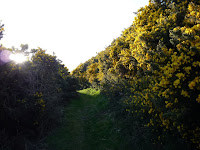 Late afternoon Hike - coast and hill tops - windy, windy, and with plenty of gorse
Posted by SV-Footprint at 2:04:00 AM

Nothing to feel guilty about for the fish and chips. They're some of the best in Scotland!

Dear Maryanne and Kyle:
Your blog is fantastic. The photos of the scenery are magnificent.
Don't waste that booze. Find a couple of Canadian tourists and it will be gone in an hour. Your
writing style is excellent. Kyle, I am beginning to think you are a walking Masochist or Obsessive Compulsive victim. If I send you a cockpit sized Treadmill, would you please just sit aboard Footprint and enjoy a Scottish Hot Toddy, while you walk, and just imagine those damn hills are there. Hire a Helicopter to get your long range photos. (just kidding)
Wishing you both good health, success and the achievement of your Nirvana.