More of the Great Glen 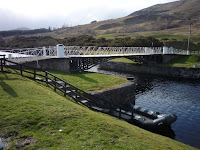 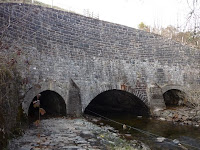 Moy farmer's footbridge, and one of the many aqueducts that were built for the Caledonian Canal
[Kyle]Our car never did materialize that day. Laddie just wasn’t up to it. Feeling a bit trapped, we decided to go for a walk along the canal to the Moy Bridge, about five miles distant to make ourselves feel a bit more productive. Along the way, we made a few side trips down various paths that looked interesting. One had lovely views of snow capped Ben Nevis (Britain’s highest point) across the adjoining river. A couple of others led down to the bottom of aqueducts the canal passed over.

We seemed to walk forever. We kept thinking the Moy Bridge would be just around the next bend but it kept not showing up. We were walking right into a cold wind that we were dying to put at our backs. Eventually, of course, we did find it and it was worth the walk. In both of us, it conjured up immediate memories of the beautifully maintained and painted bridges of the Erie Canal. The Moy Bridge is the only remaining bridge that was part of the original canal. It is used to provide access for a single farmer. The bridge is separated into two halves that are each operated independently by hand crank. The tender opens one side, and then rows a boat to the opposite side to open the other half. Now that’s a lot of work.

Early the next morning, we finally managed to pick up our car for the quick trip to Dunstaffnage to pick up our mail, top up on propane and do a few other things we always try to get done whenever we have the luxury of a car. It was a beautiful morning and it was really difficult to stay focused on the short list of errands and not to stop at every park and scenic viewpoint along the drive.

As cruisers, however, we are always beholden to either the weather or the tides. The forecast for the day was pretty much the opposite of the day before: nice in the morning and horrible by dusk. I was keen to get going as quickly as we could in order to make as much distance in the canal before it hit.

We managed to cast off just after Noon. We enjoyed effortlessly gliding over our long walk of the afternoon before. The Moy Bridge keeper cheerfully opened for us even though he had just closed after the passing of a canal cruiser going the other way. After Moy, we found the Gairloch lock wide open awaiting our arrival, lifting us up to the level of Loch Lochy.

The wind was picking up from astern so we jumped at the opportunity to get the mainsail up and get a nice, engine-free push across the eight mile loch. Loch Lochy is gorgeous. The hills of the narrow glen arc upward 2000 feet on either side, starting at thick forest and ending up lapping at the bottoms of the clouds scudding overhead. As we neared the other side of the loch, we were finally overtaken by the predicted cold front. The wind picked up and the outside temperature went down 5C in 20 minutes, making it unbearably cold. 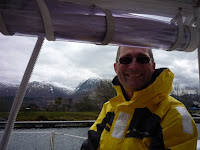 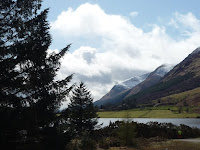 Kyle motoring along the canal - what scenery!
With the help of the wind, we actually made it across the loch in less time than it would have taken us under power. The keeper at the Laggan Locks wasn’t quite ready for us, but managed to get open in a hurry. It wasn’t quite early enough to avoid the drizzly beginning of the rain. I could almost hear the poor guy thinking “There’s always one”.

The locks at Laggan raised us up to the level of Loch Oich, the summit of the Caledonian Canal. From here, all of the locks will be down until we reach the North Sea.

We tied up at the pontoon just at the head of the locks right before the wind and rain really starting pummeling us. Our plan for the evening became pretty clear: Stay in. Eat something warm. Gaze out the windows and be glad we weren’t out there.

We were doing just that when we noticed a group of very wet, very miserable looking canoeists arriving from the other direction, paddling into the teeth of the wind and rain. They pulled up to the rocks on the opposite bank and made a very dangerous looking climb ashore. In a short while, a large man in yellow rain gear who appeared to be in charge showed up and started barking at the group to do one thing or another all without moving an inch himself. All of the poor, wet, miserable canoeists were then ordered to unload a massive amount of gear from their boats. It appeared this was in preparation for portaging their boats to the bottom of the locks by nightfall. Those poor people. We did not like this guy. We hoped it was just so they could get everything into their nice, warm hotel rooms so it could all dry off. At the end of the unloading kerfuffle, the big yellow guy ordered the most miserable looking person to stay behind and tie all of the boats together. Then he pulled them out of sight with one long line, hopefully to keep them safe while everybody had their nice, warm meal in the local pub.

We found out later that they were on some sort of course and were doing all of that to get some sort of certificate. The big yellow guy was their instructor. He booked a room in “The Bunk House” – a 50 something foot mono-hull behind the local barge/pub. The students all had to go pitch tents. 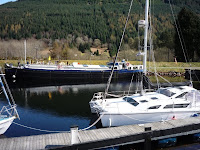 Footprint docked by the "Eagle" barge/pub at the top of Laggan locks
Posted by SV-Footprint at 1:14:00 PM

You very effectively made me hate the big yellow guy.