More of the Isle of…..Man

[Kyle]The rain stopped! The rain stopped! We awoke to actual blue skies and headed to Peel Castle for a tour. The Castle was actually a large site of roofless ruins contained within a large curtain wall mostly dating back to the 14th century with later defensive additions added up until the early 19th century. The site covers most of St Patrick’s Island, which was separate from the main island at all but low tide until a causeway was built in the late 18th century linking the two together. Underneath the main part of the site, ruins from a 6th century Celtic roundhouse have been excavated. The site has been used for a long time, indeed. 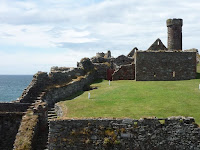 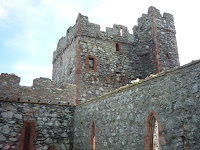 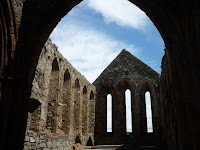 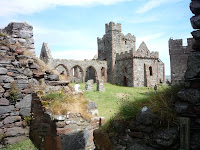 Peel Castle Ruins
The inside of the wall was very park like, with well manicured grass interspersed with the ruins. Every so often, there was a little stake in the ground with a number for use with the well done audio tour. The tour was narrated by none other than God himself, although in this instance, he was much less annoying. 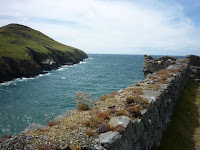 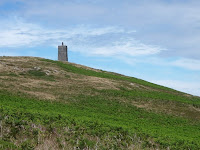 Oh look, a Hill to climb! 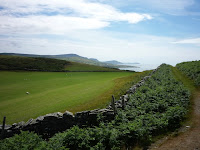 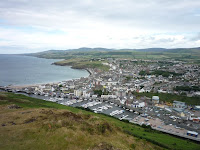 A view from a hill
Since the weather was so much brighter, we decided to climb back up the same bloody hill we had ascended the day before for a better view now that the sun was gleaming off everything. Maryanne did her usual moaning on the way up about having to repeat the same old hill again. She’s all talk. I had fully expected to be turning around and descending into town once we made it to the top, or at least the local top. No sooner did we make it to the viewpoint than she was headed further upwards toward a distant tower that the day before had been obscured by the mists of….. 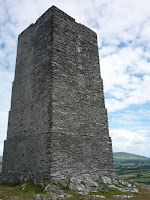 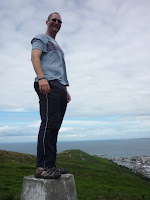 Climb Peel Hill for a close up of Corrin's tower
I love this woman! Maryanne turned out to know the whole story of the tower. Apparently, it was built in 1806 by a local man as a getaway from all of the hustle and bustle of Peel so he could read and write in peace with a view of the sea. He would often go up there for days at a time. Eventually, the islanders made him brick over all of the windows facing out to sea since ships kept mistaking the tower for a lighthouse. The tower now sits alone on the hill with his family buried nearby.

Much to my astonishment, my adventurous wife agreed to continue in the original direction, i.e. away from town, on a trail we hoped would curve down the back side of the hill. It did, and in short order, we were walking along a wide, tree covered path along the river Neb, listening to the burbling water and the songs of birds. The path runs on the abandoned railway line that used to run the ten miles between Peel and the capital, Douglas. Eventually, the Neb runs under a bridge and then widens to become Peel harbor, before plunging over the water retention flap and the adjacent weir into the Irish Sea. 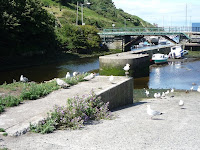 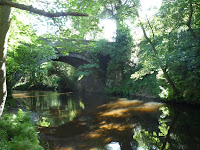 The River Neb
Nearing the harbour, we came across the Transport Museum, home to lots of obscure Manx transport minutiae and an example of the world’s smallest road legal car ever produced, the Peel P50, built on the Isle of Man in the 1960s. It has one seat, is powered by a motorcycle engine and weighs only 130lbs – less than our dinghy in lifeboat mode. It doesn’t have reverse, just a handle you pick it up with to swing it around and it is claimed to get better than 100 miles per gallon. Only 200 were built, so now obtaining one will run around £30,000. So much for that idea.

A 1965 version of the Peel P50 - The World's smallest road approved car
Photo from WikiCommons Media - original by Philip (flip) Kromer
We went past the boat to the waterfront and treated ourselves to a couple of delicious ice cream cones from Davison’s Award Winning Luxury Manx Ice Cream Parlour. Apparently, they’re world famous on the island. They should be. That’s some good ice cream.

We ate our ice cream looking out on Peel beach, which was packed with people having typical British (or quasi-British) beach holidays. Parents were laid out on beach chairs and towels while their kids built sand castles or tried to dig to Australia with their little shovels. We wandered back into town and came across several gardens that were apparently part of some tour or competition. It was a rare chance to get to see some of the back gardens of Peel without having to climb a hill first. We also managed to find ourselves our own bottle of Manx Spirit and a sampler of Manx cheese, which is also supposed to be good. 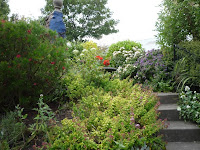 Peel streets and gardens
From there, it was back to Footprint to prepare for the next day’s hopefully sunny and mild, downwind journey to England.
Posted by SV-Footprint at 2:55:00 PM

Email ThisBlogThis!Share to TwitterShare to FacebookShare to Pinterest
Labels: Isle of Man

I just KNOW you would rather have taken home that car than just about anything else, Kyle! Ok, except your lovely wife, whom you love. But it's cute as can be. Enjoy the good weather, you two.