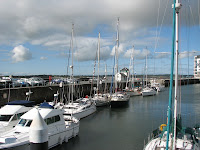 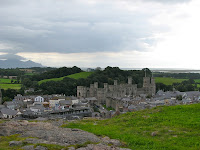 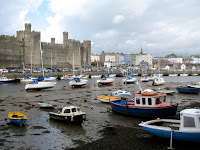 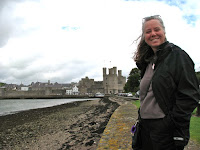 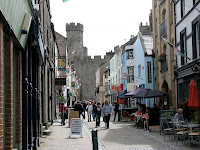 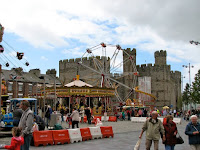 The Castle dominates Caernarfon, and is the reason for most of the tourists visiting the area
[Kyle]Yuck! British weather is starting to get pretty tedious.

Once in Cærnarfon, the wind rose and rose all night. By morning, it was howling. It had also started raining in cold sheets. It made me think of the time in Newport, Rhode Island where, having only one free day, we forced ourselves ashore in miserable conditions and ended up wishing we had just stayed aboard. I wanted to see Caernarfon but I didn’t want to go out in Caernarfon.

Eventually, we both got stir-crazy enough to decide we were going out anyway. We bundled up and went out just as the worst of the rain and wind passed. Within an hour, it was hot and sunny and we were badly overdressed.

We went for an aimless meander throughout the town, mostly inside of the old walled portion. We navigated by arriving at a street corner and then choosing the most appealing direction until the next corner, repeat.

The old town in Cærnarfon is very nice. It’s dominated by the castle, of course. Around the perimeter but within the outer walls, the streets radiate away and are fronted by prettily painted buildings, mostly pubs and cafés with outdoor seating areas that were quickly filling in the sunshine. At the town square, right in front of the castle, a temporary fairground had been set up. Somehow, I managed not to buy an ice cream.

After several hours wandering, we were headed back to the boat when Maryanne spotted a grocery store just as I spotted a big hill. She did her thing, while I did my thing.

Kyle checks out the view from the top of yet another hill!
She was pretty worn out by the time we got home, so I treated her to my home cooking and then even washed up as usual afterwards.

[Maryanne]About a week ago now, I managed to bash my leg badly on a bad roll of the boat, and the bruising and swelling still seems to not be getting any better. I've been resisting too much hiking (not difficult in the rain) but I decided to play the sympathy card and insist Kyle cooked today.... He resisted, and resisted, and resisted, {Kyle: one resisted would have been sufficient!} but eventually (once he realised it was cook or starve) he turned out the most delicious potato soup, and kept a very smug grin on his face all through dinner. Now I know what he's capable of, I'll expect much more from him. I doubt my leg will recover for a long time ;-)

After dinner, Kyle and I went for a second stroll (I was sufficiently rested) and found the town deserted of the crowds of tourists, it's medieval streets seeming picture postcard perfect in the dusk of the day. We eventually settled for a drink at the towns Royal Welsh Yacht Club which was set in impressive and very old buildings; Porth-yr-Aur (The Golden Gate), constructed in or about 1284 (making it the oldest yacht club premises in the world - although certainly not the oldest yacht club). Our visit to the bar, proved yet again that EVERYONE has a story to tell; the sprightly old barman had quite a few stories, including having spent time in the bush of South Africa, and speaking Zulu (sounded perfect to us!). He attempted to teach us a few words of Welsh, but I think we're poor learners; we forgot it almost as soon as we'd left the bar (or could that have been the drink?)
Posted by SV-Footprint at 11:13:00 AM

I know that bad leg will haunt you for weeks, Maryanne. Try him with Italian. He can do that, too ;-)

re: your pic of the boats anchored in Mud Harbor, how do the sail boats stay upright?? i know i sound naive (yes, i chose the word naive over stupid - please return the courtesy should you answer me), but i really don't see how they keep from toppling sideways without ANY water!

Ooh, good question Kate. As you know a sail boat generally has a single "fin" keel sticking down at the bottom, like an upside down triangle - so yes they'll flop over as the water disappears. The keel is important to any sailboat that wants to sail anything other than downwind, so it can't exactly be missed out in the build.

Most power boats have a flatter bottom so they'll just tilt a bit, no big problem.

However, the Brits thought that though, it would only take a single low tide to work it out after all! and came up with a solution. They build a special type of sailboat with two keels - one to each side of the bottom of the boat and splayed slightly - and more rectangular than triangular in shape, so the boat won't tip forward or backward either as the tide goes out.

This duel keel boat bottom is know as a bilge keel - They work like sled skis to support the boat as the tide goes out.

The bilge keel is found really commonly in Britain (and I guess other areas where big tidal ranges and drying out moorings are common). Other solutions are the lifting keel, a catamaran (or trimaran), and some older solutions still Lee-boards or dagger boards/center boards.
Dah Dah!!!!

This picture should help