A forgotton land of wonder and plenty?

[Kyle]The cove at Dyros doesn’t have a village as such, just a few widely scattered buildings and an informal looking caravan park. The village of Dyros itself is at the top of the nearby ridge a couple of kilometers away. The big attraction here is the caves. Dyros has a very long and elaborate network of caves, all beautifully decorated in stalagmites, stalactites and other crystalline structures.
Even though we were tired as a result of having our sleep patterns messed up by the overnight sail, we couldn’t resist taking the dinghy over to see it as soon as we were settled. 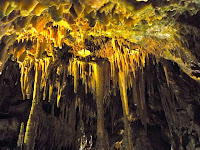 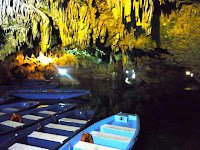 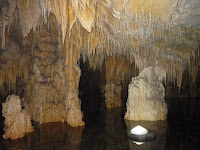 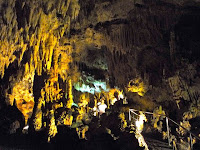 Exploring the caves by boat and foot
It was amazing for two reasons. One was that the cave itself was incredible. It was labyrinthine. It went on and on for miles both above and below the water and was covered with the most beautiful structures everywhere we looked. We’ve been in a few caves now, and this one definitely tops the list for being jaw-droppingly beautiful and impressive.

The second amazing thing was the tour. It was terrible. It was the worst tour of the coolest thing I have seen. The tour started with the ticket guy sitting us down in front of a long video and then disappearing. The video had the effect of making us feel the tour would be unnecessary since now we’ve seen it. There were, however, a couple of interesting bits where the film crew left the tour route to follow a team of cave divers into some really cool, remote parts of the cave.

Right in the middle of one of these parts of the video, the guy came back and told us and the other four people there the tour was starting. We were shown to a boat inside the cave and told where to sit. Then the guide boarded at the back and we took off. By using the tip of an oar, our guide skillfully punted the boat along the route through all of the tight twists and turns without bumping the sides of the boat hardly at all. The aggravating thing about it, though, was that he seemed to be going for some kind of record while doing it. With no more commentary than saying the names of four or five places along the way, we positively zinged through the cave. At the largest room of the cave there was a long straightaway. We actually got going fast enough to feel a breeze. By the time everybody readied his or her cameras for a shot, it was gone. The photos probably would have been blurry anyway from the speed. The trick seems to be to go and see it and not worry about photos. I can’t imagine what it must’ve been like in the old days. “I say, old boy, slow down. I haven’t had time to even set up my easel!” Other parts of the boat route were narrow and low enough to have us all ducking and breathing in.

At the end of the tour, the boatman banged us up to a dock and left – just vanished. We were still processing the boat tour when we noticed. The remaining 300m of the cave were on foot. We made a point of taking our time and being the last to leave. The cave was gorgeous, but what the hell was with that guy? He must have been trying to do the entire tour during a commercial break. Yeesh!

The next morning, we went ashore again to see the museum and adjacent cave. This cave was inhabited during Neolithic times from around 5200 B.C. until an earthquake in 4 B.C. caused a collapse of the entrance, closing the cave and killing the inhabitants by trapping them inside. The large cave was used as living quarters and storage area. It was the center of the obsidian trade all of the way from Milos in the Cyclades to the southern Ionian. We paid for two tickets and were shown to the small but well done exhibit room displaying artefacts found in the cave. When we were done with that, we were told the cave was closed. That was it. That was the whole thing: one room. That would have been nice to know before we bought the tickets.

Feeling like we had to redeem the trip somehow, we trudged in the unbelievable heat of the windless sun UP the hill to the town to have a look. The Maniot (or Mani) peninsula is a very wild, barren land. Cultivatable land is rare and for centuries was guarded ferociously. Because of this, feuding clans and families built fortified tower houses as protection from raids. These bare stone towers have become the architectural signature of the area, giving a much different look to other parts of Greece. The village of Pyrgos Dirou has a few of these old towers standing, with many newer versions filling out the rest of the town. 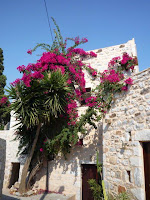 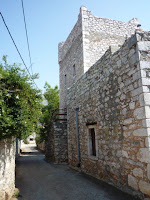 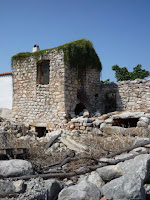 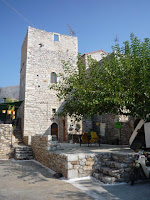 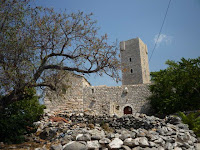 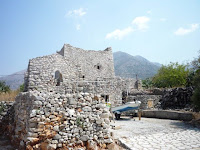 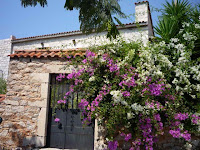 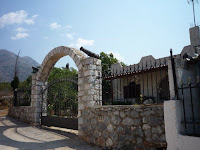 Picturesque village with a feuding history - Pyrgos Dirou
Maniot seems like a forgotten place. It’s not on the way to anywhere else (unless you’re on a boat). Tour buses don’t seem to come here. The place is left to itself. We walked the narrow, cobbled, empty streets pleased to have the whole place all to ourselves. Along the way, we grazed happily on an abundance of edible plants. There was more than anybody could eat, so most of it was left to ripen and then rot on the branch. We found and ate plenty of delicious figs, almonds, pomegranates, lemons, grapes and cactus fruit. There were also lots and lots of olives around, but these are not eaten directly off of the tree and must be processed first (and anyway, weren’t ripe yet). 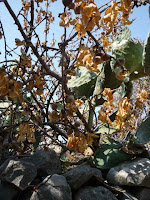 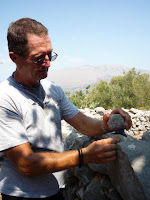 Kyle finds, opens and enjoys Almonds among the bushes 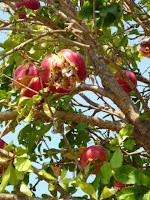 Kyle munches on a ripe cactus fruit and pomegranates sit ripe for picking
The food was great, but wasn’t doing much for our thirst in the heat, so we stooped at one of the two local restaurants for lunch. There we had a good meal that stuffed us to capacity accompanied by a jug of cheap house wine that was tasted like it could also be used to clean engine parts. At least it was cheap. 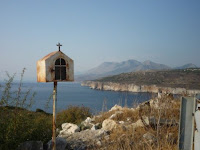 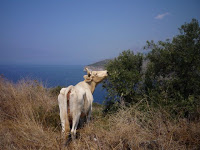 Scenes from the walk - it's rare to see a cow in Greece
We walked off our lunch by returning to Footprint in the unrelenting afternoon sun. On route we passed a very nice looking hotel designed in keeping with the local villages. We soon realized it was closed, and presumed for the season, but as we took time for a closer look it seemed as if it had been abandoned quickly and some time ago. Wine and water bottles sat on tables, as if evacuated in a fire alarm and not returned for years since. It was sad to imagine the dreams and investments lost with the foresaken hotel. 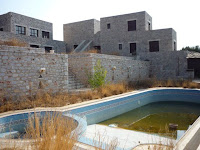 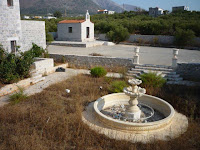 An lonely, abandoned hotel
The first order of business back at the boat was to jump in for a cooling swim. Out of habit, I followed our chain on its winding path to the anchor. With no wind to speak of, Footprint had just bobbed around basically in the same spot. Our anchor and the first 15m of chain had been completely unnecessary. It was the weight of the second 15m that was keeping us in place as evidenced by the tight swirls of chain tracks in the sand where it first touched the bottom.

At the anchor, I got to see the cutest thing. As I approached, from under the back of the buried anchor blade, a couple of very nervous eyes peered at me over the edge. An octopus had made himself a little burrow there. As I hovered overhead, he tried tucking himself away as far as he could. I dove very slowly. As I approached, he changed color to try to match the silver anchor above and the sand below. By grabbing hold of the other end of the anchor, I was able to counter my buoyancy and stay right there watching him watching me. When the urge to breathe got too much, I surfaced and left the poor little guy alone in his new home. We were planning a middle of the night departure to the next place. I felt bad for taking his roof. When we left, I made a point of pulling up the anchor very slowly so he would be able to leave without getting hurt. 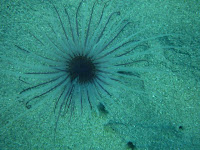 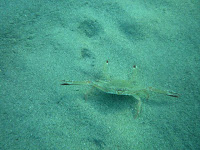 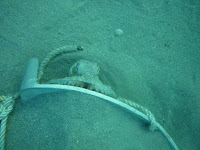 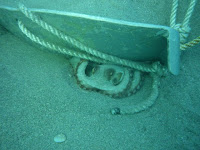 Plenty of sealife to entertain too
Posted by SV-Footprint at 4:05:00 AM