[Kyle]We’ve seen Santorini referred to as Santorini/Thira in almost every guide we have. It took us a while to surmise that Santorini is the name of the enormous volcano and thus the greater archipelago, Thira is the island forming the biggest remnant of the crater.

Santorini is probably the best known of the Greek islands. It is beautiful, but for sailors, it can be a bit of a headache. There are two main reasons for this: One is that everything is very steep, so by the time you’re two or three boat lengths from shore, it’s too deep to anchor (100m+). The other is that Santorini is composed of very new rock - boulders that haven’t had time to wear out into sand or mud. Santorini does have beaches, but most of them are terribly exposed. This leaves almost nowhere suitable to go. There is a marina on the southeast corner of the island. It is reputed to silt up badly. When we passed, it was so full that they were berthing boats on the outside of the breakwater. Not good. The main harbor at Fira has a giant mooring ball that serves as the hub of wheel from which boats tie stern-to the local pier with lines acting as spokes. This requires that someone be left aboard at all times to rearrange lines as others come and go. All this is fine for crewed mega-yachts, but not so good for us. We decided to go for the anchorage at the village of Corfos in Nisis Thirasia, the second largest island of the group.

We pulled into bay below the village and it quickly became clear that we had been duped. A tour boat on a private mooring took the only spot it would have been possible to anchor as its guests snorkeled on the shallow water. We tried looking at a couple of other dodgy spots, but did not like them at all. We noticed that a lot of the restaurants seemed to have unoccupied mooring rings on the outsides of their balconies and decided to ask around about that as a possibility. On the way, we found one of the big tour schooners and when he offered that we could tie up to him (not suitable as we wanted somewhere for 2 nights, not just half an hour) we asked if he had any ideas. He told us we could use one of two free mooring balls in the harbour. One was a huge, sharp, rusty can and the other was a big plastic ball. We went for the ball.

Now that we were all safe and secure, our next order of business was to do a bit of snorkeling and see what all of the tour boat fuss was about. Sea life was still sparse, as in other places in the Med, but we were pleased to see that it seemed to be doing better here than many other places, particularly considering the popularity of the island. The water was amazingly clear, but the real attraction wasn’t so much the sea life as the topography, which was dominated by overhanging ledges disappearing into the blue depths. 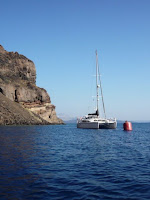 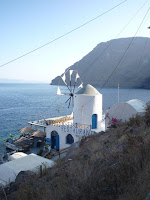 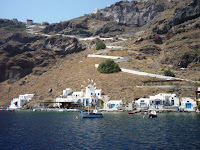 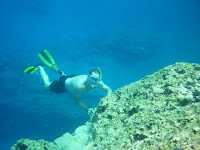 Thirasia
Eventually, we took the dinghy to shore and climbed the path to the chora at the top of the hill. We were willing and prepared to rent a donkey in order to help out with the local economy, but after all our distractions, the previously jammed donkey parking lot was now empty so we walked up (dodging the obvious deposits). Our quest was to find out the ferry times to Thira the next day.

At the top, we wandered along the donkey-width street that follows the ridge. We were somehow expecting more of a proper village, but this place was little more than a collection of pretty houses with a great view. As the only ones walking the street who didn’t live in the town, we felt like we were taking a stroll through people’s gardens, like we were being overly invasive of the privacy they usually have. We seemed to be the only tourists. 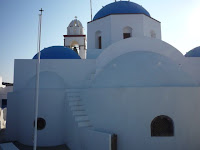 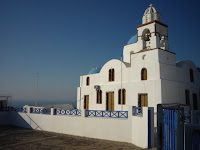 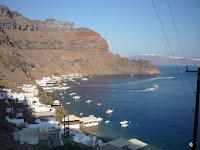 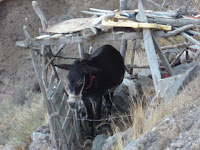 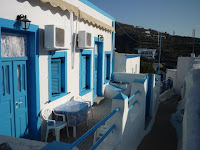 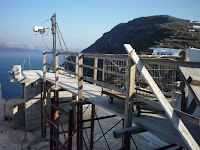 Scenes from Thirasia, Santorini, although there is a road upto the main town, the streets are donkey wide and the shop has an interesting system to deliver goods
From one end of town I spotted a survey marker past the other side in the direction from which we came. It was marking the high point of a prominent cliff. It didn’t look too far so that became our new goal.

As we were walking along the caldera ridge, we were looking down at the harbor with our little boat moored there. Two big schooners full of people were coming in, refilling the island’s supply of tourists. It was so pretty there.

The schooners came closer. We were mortified when we realized they were heading for the two moorings: the big, rusty can and, gulp, ours. The bigger ship of the two paused for a second and then came alongside, presumably to call to us and figure out who took their ball. We were way up at the top of the cliff probably at least an hour away, so we couldn’t do anything but watch helplessly and feel horribly embarrassed. What were we going to say to the guy? The schooner who had offered us the ball was nowhere in sight. Maybe he didn’t even know it was somebody’s ball. 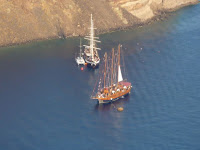 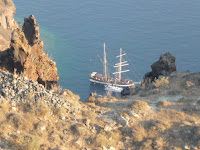 Oops, that moorign ball we were told we can use, we probably should not have!
We decided that since it was too late now, we would continue to the point, see the sunset view of the whole caldera and then return to face the music. We had wanted to eat out. I had pretty much decided on a restaurant overlooking the crater, but now it was pretty obvious we’d have to eat at the harbor after being dressed down by the schooner captain. We’d play really nice and hope one of the restaurants would let us tie up to them. We just HAD to figure out how to stay, or there would be no way we would be able to go to Thira the next day.

As we walked along, we noticed that the giant schooner had rafted up to Footprint and was disgorging guests for a swim. Footprint was the only boat tied to the mooring, and the Footprint/schooner combination was looking very lopsided. That boat must have been 200 times the weight and windage, and all of that force was potentially being borne by our little cleats. Well, I guess we were asking for it. Fortunately it was flat calm so the forces were slight. 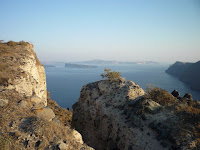 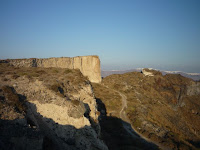 Climbing up for the views
Walking back from the point, we saw the two big boats untie and steam back off for Thira. They turned out to be doing a sunset cruise, one that was advertised as stopping at all of the islands. They only used the moorings for half an hour per day. Footprint was left lying to the mooring as she had been before. If that was all it was, maybe it was okay to stay there.

The Panorama restaurant at the rim looked a little deserted so we decided to eat at a place in the harbor that caught our eye when we arrived. By then, all of the ferries and tour boats were steaming back across to Thira. Maryanne was concerned that the restaurants would be closed. I was hoping not, since the place was so busy before. When we arrived at the waterfront, we found it was a ghost town. It seems the boats took not only the customers, but also most of the staff with them. We resigned ourselves to eating at home.

As we were most of the way back to the dinghy from the hill path, we found a small family settling in for the night. We still hadn’t found out anything about ferry times so, figuring the whole island must know it by heart, we interrupted them and asked. “9:30”, came the answer with a friendly smile. We were hoping for earlier than that. There were so many boats coming and going that we decided to get up early just in case we see some activity before then.

Back at Footprint, we expected chaos, or at least a nasty note. Instead, there was not a mark on her and our dock lines were neatly coiled on deck. We had no other place to go, so we redid them and laid them across our lifelines so they would be easier to grab next time, hoping to make the inconvenience as minor as possible for them for just one more day when we were to visit the main island of Santorini.
Posted by SV-Footprint at 12:57:00 PM