[Kyle]As I said earlier, we left Dyros in the middle of the night, taking poor Timmy’s roof {Maryanne: Timmy being the resident octopus we’d acquired}. The passage was totally boring. It was night. There was no wind. We motored the whole way. There was nothing to do but stare at the instruments in the dark and wait for it to be over.

We pulled into Methoni, which is pretty much at the southwestern corner of Greece, just after the fishermen left the harbors to start their day. We pulled way up to the beach as close as our draught would allow and set the anchor. Maryanne had slept for the passage, so it was my turn to crash in the bed for a few hours while she sorted out our growing photo collection.

Once I was up, we took the dinghy ashore for an orientation. The town was lovely. Adobe houses with curvy shapes have been replaced by buildings with red tile roofs like in Italy or Provence. It was clearly after the big tourist season so, once again, we felt like we had the whole place to ourselves. There seemed to be just the right balance between bustle and quiet. All of the cafés were open, but each only had a smattering of customers, so there was no pressure to get moving. I was still on only about half of the sleep I really needed. There was no Meltemi wind here, so it was hot, humid and still. After only an hour or so of walking around I was spent so we headed to a café for coldies and a couple of appetizers to tide us over until dinner.

As we were heading back to Footprint on the dinghy, we made a slight detour to a British boat anchored nearby where we met Steve and Marion. We invited them over and spent most if the rest of the evening swapping sea and cruising stories and advice. As we were all in Footprint’s cockpit having a good time, The Dutch showed up and anchored as close to us as they had in Kimolos – those Dutch – the nudists. The thing about Anchorage TV for cruisers is that you don’t always get to pick your channel.

The next morning, we were a bit more motivated. We were up early (for cruisers). We immediately made our way to the big local attraction: a fort and tower built in stages by every occupying power in Methoni, mostly Venetians and Ottoman Turks. Admission was free, which I like. The large site of the old walled city was in a pretty advanced state of decay but there were pockets of workmen restoring a little corner here and there. The tower, which serves as the most conspicuous landmark for arriving mariners, was in the best state of preservation.

By then, the wind was picking up in the harbor. It was coming from the only direction from which the harbor offered no protection. Every time we got a view of Footprint, we were checking for signs of dragging. She held fast, but the chop in the harbor was getting up to two feet or so. Methoni is home to a Carrefour supermarket, so it immediately became one of our priorities to stock up on hard to find stuff. After the fort tour, my job became to return to Footprint in the dinghy to retrieve backpacks in which to carry home the groceries. While I did that, Maryanne went to the post office to buy stamps. Even though it was the middle of a weekday, the place was locked up. The place had been locked from inside – the keys were still dangling from the lock. She had to knock until someone heard her, then they let her in as if that was just the normal procedure – very odd. There was no way to launch the dinghy in the surf without getting totally drenched in spray. By the time I was back at the beach to rendezvous with Maryanne. I was a walking wet t-shirt contest. We bought so much stuff that the only way to make progress against the wind in the dinghy was to lighten the load. Without hesitation, Maryanne helped me into the water and then swam to the boat so I would have a chance against the wind. 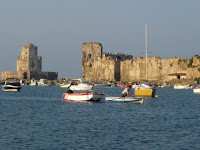 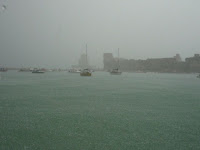 The harbour before and during the rain
I readied the dinghy by putting it in lifeboat mode while Maryanne stowed the groceries. No sooner had I finished than the sky opened up. It rained hard. Lightning could be seen all over striking the hills and thunder was nearly constant. It was the first rain we had since Galaxidi 47 days ago, which was just a drizzle at night. It was the fist time we had even seen clouds since then. Once the rain passed, the wind shifted so that it was coming off of the beach. The seas flattened again. Within fifteen minutes of the rain stopping, we were floating on the surface of a harbor of mercury. The air is cooler and drier. It should be easier to sleep tonight, ready for an early departure tomorrow. 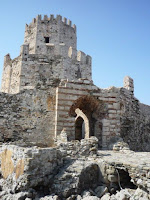 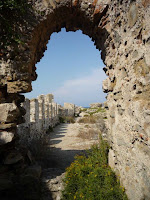 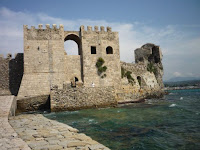 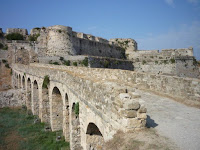 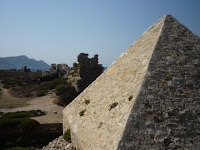 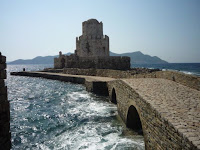 Methoni Castle
[Maryanne]Methoni was yet another face of Greece that we hadn’t seen before. Mentioned by Homer as one of the towns offered to Achilles by Agamemnon (what, not done your homework lately?), it is now a small harbor town dominated by the castle and with a great small beach and a town full of hotels and tavernas and a smattering of basic shops. As we ambled around we heard plenty of British English being spoken in the cafes and tourist spots; we were not sure if these were retired immigrants or holiday makers. A few of the houses in town had a Swiss feel to them with flowered filled balconies and ornate eves; we wondered if that was due to immigrants or some general practicality (hard to believe this area gets heavy snow!). The castle was a really large walled area that once enclosed a whole town, with ocean on 3 sides and a large moat on the one end for access from land. It’s really heavily protected from attack from all directions and we spent our time ambling around mostly ruins imagining the site in its prime.

In some places there are rooms, possibly dungeons or just as likely storage rooms. Within the walls are structures we are led to believe were once Turkish baths, and had clear signs of plumbing within, but also had openings in the domed ceilings that we could not guess the purpose of. There were few notice boards and with free entrance, nobody to offer any guide or tour of any kind so all we could use was our imagination. Basically we liked the town, and arriving outside the tourist season it seemed available to us alone; no pressure to enter a restaurant, or join a tour; we were free to wonder and speculate. Beautiful.
Posted by SV-Footprint at 12:13:00 PM