[Kyle]We were the first ones up again and managed to be in the short canal connecting Campbell Creek to the Bay River by the time the sun rose over the misty landscape in an amazing fiery sunrise, guzumping all of those other lazy boaters still sleeping back at the anchorage. 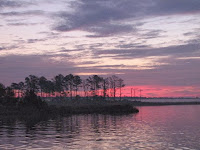 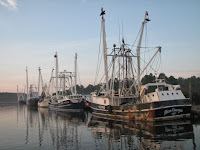 Three hours later, they all passed us. There hadn’t been any wind for days and I was dying to show them all how differently it would go if we could have a proper sails-up race.

It was another canal, creek, river, bay, river, creek, canal, repeat kind of a day. By the end, we started to see more of the big shrimp boats working in Pamlico Sound. At the last section between very beautiful Adams Creek and Beaufort, the canal gradually changed from banks of muddy marsh to beachy looking sandy marsh.

The last time we came this way in Footprint, we stayed at Morehead City for our last couple of days in the U.S. That turned out to be a pretty big mistake. There was little to do and the marina was expensive and nickel-and-dimey. We later learned we should have gone instead to nearby Beaufort (this one is pronounced BOW-furt, the one in South Carolina gets to be BYOO-furt).

There are basically two places to anchor in Beaufort: Town Creek, which is kind of out of town, but not too far, and Taylor Creek, which is right in the middle of the pretty town waterfront district. We knew it was supposed to blow pretty hard in a few days, so we pulled into Town Creek since it seemed like it would have better protection. The place was small and packed with mostly derelict local boats and after looking for an hour, we couldn’t find anywhere suitable in which to squeeze Begonia.

Defeated, we got the last drawbridge opening for a couple of hours (it doesn’t open for rush hour. Wait a minute, rush hour?) and headed into Taylor Creek. Taylor Creek seemed much larger, but was also pretty much full of moored local boats. There was a fairway between the moorings and the marinas along the waterfront.

It seemed from watching all of the boats that had passed us earlier that it was standard practice to “cheat” the mooring field by anchoring in a line on the mooring edge of the fairway. The problem was that the water was fairly deep and anchored boats need more swinging room than moored boats, particularly if it was going to blow hard. Pinch the channel too much and you might get run off. Anchor too close to the moored boats and you could swing into them. We knew we were going to be here for a while, so we wanted good room all around. We searched for an hour way up and down the creek and then finally settled on a spot right in the middle of town by the dinghy dock.

It had been a pretty long day and we were pretty beat and hungry, so we decided to make the first night an “in” night. Deploying the dinghy seemed like just one too many post-sailing jobs at that hour. Maryanne made up a big pot of potato soup and we were able to turn in relatively early. I was so pleased that we would be able to sleep in the next day 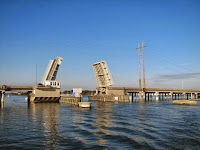 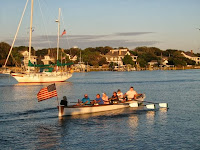 It didn’t happen. Our anchor alarm woke us both from a deep sleep at about 4:30. We weren’t dragging; we had just swung beyond the alarm limits that we had set too tight. Still, THAT will wake you up.

We were fast asleep again when another alarm went off. This time, it was our barometer in the other room. I had pressed a button to turn on the light in the dark of the previous morning and had somehow turned on a six o’clock alarm at the same time.

An hour later, some bill collector called looking for somebody we didn’t know. Fine! We’re up.

It was all well and good. It was supposed to blow later as well as start raining. We wanted to get our first reconnaissance of the town done and be back on the boat before all of that happened just in case we didn’t like the swinging situation.

We never made it. The rain and wind arrived earlier than forecast, so we decided to just stay put. As the wind picked up from the southwest, it was blowing us right into the fairway. There was still plenty of space for passing boats, but we were clearly the one sticking out the most. We were expecting the harbormaster or the Coast Guard to come by and tell us to find another spot, but they never did.

Maryanne did some work getting the ham radio and the sat phone ready. I did some routine maintenance on the engines. When we were done, those docks were looking awfully close. We took a couple of sights and after half an hour or so, we determined that we were actually dragging anchor.

Aw, crap! Luckily, it was happening very slowly. Also luckily, one of the boats nearest us last night, who had been in a much better spot to begin with, had left earlier. We re-anchored further out of the channel in their old spot. I backed down using a whole lot more power than I generally ask of these engines, even in forward, and we were satisfied that we were now in good holding.

We shut everything down and were tidying up when it started to look like we were getting close to that dock again. What the hell? I backed down like crazy on that thing! We had out a lot of chain and it was possible that we were just swinging and not actually dragging. The anchor was a real pig to get off of the bottom, so it was probably fine, but we didn’t want to take any chances, so we moved a little further on and anchored again.

This time, we let the wind build Begonia’s speed before she was jerked to an abrupt stop at the end of her rode, and then we used ALL of the power to give everything a good tug. She’s not going anywhere, but we’ll stay aboard through the worst of it, just to be safe. For once, we have the luxury of staying somewhere longer than a day or two, so we can afford to lose a couple of tourism days aboard.