On day three a long swell started coming in from the north, being pushed ahead by the storm that was headed our way. The wind arrived shortly thereafter and for the first time in days, the sails filled and stopped their incessant slatting back and forth.

Just after I woke Maryanne for dinner, I was sitting at the helm watching the sea grow and the increasing waves smash into one another when I noticed a strange vortex to our right. It looked kind of like what we see behind the rudder when making a hard turn, but we weren't using that much rudder and it was too far off to the side of our wake and too big.

Then I saw it. The sea right beside the boat flattened and a gray mass surfaced. In the middle of it, a blowhole four inches across opened up and let out a great blast of air like a steam train whistle. The blowhole was only about five feet away, so the side of this leviathan could have been practically touching the boat.

I went to the cabin door, slid it open, drew a deep breath, made eye contact with Maryanne, and then yelled, "WHAAALLE!!" I realize now that it was probably overkill for me to do that, but c'mon, WHALE!

That one and perhaps one other fell behind, just touching the surface. We didn't get to see enough to be able to say which kind of whale it was, but nothing with a blowhole that big is not a whale.

The sea had been pretty empty for a couple of days, so it was cool to have that to break the monotony. It was also a little unnerving. We have read enough accounts of boats being stove in by angry or startled whales to be a little wary of them. I've read that they like to cruise around at about three knots. Perhaps we snuck up on them. Hopefully they saw us first and just came over to see what we were. 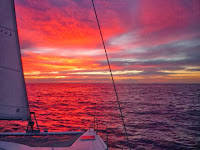 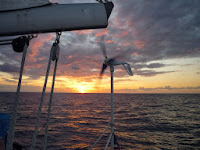 By the midnight watch at the beginning of day four, the wind had picked up to twenty or so. I went forward to reef the mainsail while there were still two of us awake, and then Maryanne went off watch for what must have been a terrible night's sleep.

When she awoke, we needed another reef, which didn't seem to slow us down at all. The waves grew and soon we were careening down them in wild bouts of surfing. The timing of the storm was such that Maryanne got the brunt of it on her morning watch. I was lying in bed on my off watch worrying about what was going on out there.

I would manage to fall asleep for fifteen minutes or so, and then there would be a side load that was too much and too long. I would wake up with a yell, thinking, "This is it!" I would rush to the porthole and see that the waves, while impressive from the low vantage point of the porthole, were probably only ten or twelve feet, with the occasional fifteen-footer. My knowledge of oceanography tells me that waves of this size, while being able to make for some frightening motion, are not physically capable of putting enough force high enough up to flip a boat Begonia's size, even with a perfect hit of the worst type of wave, provided we don't have too much sail up. Our wave height number is twenty-one feet, AND it has to be a curler, AND it has to break right when it hits us. If the boat were really going over, I would end up on one wall or the other.

I would repeat this to myself over and over until I could get my heart rate down far enough to sleep again. Then fifteen minutes later, it would happen all over again. Auch!

After a few of these episodes, I became aware that I really had to pee, creating another obstacle to sleeping. I sat down (you can't stand in these conditions, unless you want bruises), and was immediately mesmerized by the view out of the downward facing escape hatch. Firstly, the water in the deep ocean is blue, not brown or green, but crazy, artificially colored, bottomless blue. It's the same color as the water in all of those tropical beaches that instantly hypnotizes you into thinking you want nothing more than to jump in. Additionally, the hypnotic blue water is whooshing by, making a little rooster tail where the wakes meet between the hulls. I had finished my pee ages ago, but I was transfixed at the window like a cat in front of a washing machine. 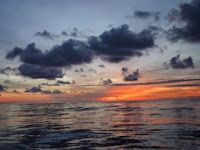 Stunning views from the head and the cockpit... Nice colors

A wave hit the window and there was a complete chaos of churning water. Then there was a flash of clarity as the window was submerged and for a second or so, I could see the seemingly peaceful world under the boat. I could see the keel on the other side, as well as the feathered prop and the rudder, all looking fixed and serene. Then it was gone.

I went to get up and suddenly there was an acceleration holding me back and the water outside turned into a blur. We were surfing again. The whole boat rumbled. When it subsided, I got up and was immediately mashed forward into the sink as the boat came to a very abrupt stop.

"Oh", she scrolled through the menu to on the gauge to the 'max' screen. "Twenty-one knots."

HO LEE CRAP! That is too fast! We're glad she tracked straight and didn't wipe out. Maryanne also had the highest winds: 37.1 knots (luckily tail winds).

The wind had decreased by my watch, but the waves were still building. Most were around fifteen feet, with the occasional eighteen or nineteen-footer. I saw the high teens surfing down a couple of those, but I hope that twenty-one knot record stands for a long time.

With the arrival of the storm, the wind shifted from west to north, and then to northeast, finally bending our course south toward Grand Turk. After a day or so, the clouds passed and the wind died back to the high teens. The waves subsided very slowly. Two days after the storm, they were still around twelve feet. The forecast says it'll be another three or so before they finally stabilize at five to eight.

So it's still a bit too choppy to be too comfortable, but we are now heading toward our destination. We passed our furthest point of land on day eight and are now closing on Grand Turk. Even over-reefed, we're still going way too fast to arrive when we want to, so we have dropped the mainsail completely and are down to five or six knots on a reefed jib alone.

As we sail south, the days and nights are getting warmer and the waxing moon is lighting up the sea for us at night. Once the sea calms down a little more, we expect the last few days to be pretty nice.
Posted by SV-Footprint at 6:36:00 AM

Just now had a chance to read this. What an experience it must have been to encounter the whale and quite honestly, it makes me seasick to read this. Don't know how you avoid that on board. So glad to read you have made the voyage safely once again. Bravo!

OMG Kyle! How cool and sort of scary at the same time to have a whale so close you could practically touch it! I instantly thought of Tom Hanks in Cast Away when he wakes up on the raft to see that huge whale’s eye in his face. Wow. Definitely worth the dramatic announcement! ;-)

And as if that excitement weren’t enough for the passage so far, you get a roller coaster of a storm to deal with too. Sheesh! I bet you two will be so glad when the wind dies down and the seas are calm enough so you can sleep like babies. :-)