[Kyle]We spent a full day in Cockburn Harbor on South Caicos, starting with a dinghy ride over to a couple of the snorkeling spots recommended by the SFS staff.

The first was a place called Shark Alley. The SFS was busy at the moment doing a lot of shark related work. When we first visited, several of the students were repairing the nets they used for catching the sharks they would then measure, tag and release. We got the impression the harbor was lousy with several different species. We didn’t end up finding any sharks, but spotted a few stingrays and a fairly healthy looking coral reef ecosystem. 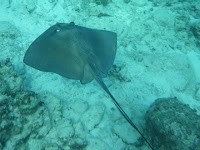 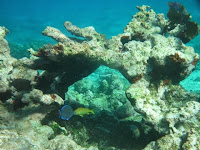 We moved on to a place called the Admiral’s Aquarium, which was an SFS educational site complete with concrete blocks covered with signs describing various species that seemed amazingly well placed. The Barracuda sign was right next to a school of Barracuda. I want to wipe the growth off of another and had an adorable little fish pecking at my fingers as I cleared off the sign. It turned out to be describing a little Damselfish that will fight to defend its little patch of algae. 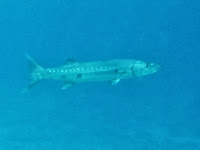 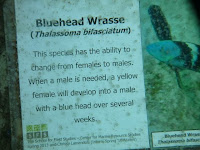 Admiral's Aquarium includes notes! How cool is that?

The tide had been coming in all morning and the current had been fierce as a result. We had to swim like crazy to get ahead of the pudgy, then we could rest drifting back down. We were pretty tired at the end of the whole thing, so it was fortunate that James invited us to lunch at the SFS.

There was a mountain of food as if they were accustomed to feeding a bunch of teenage scuba divers. We did our best to make a respectable dent, but they still had a mountain of leftovers for later.

The school was busy, so we really only had time over lunch for introductions and the index card versions of each other’s stories. James offered to pick us up later for dinner in an SFS boat, so we wouldn’t have to deal with the dinghy. We headed back to Begonia armed with the code for their strong wifi as the students and staff got back to work.

James arrived with his friend, Molly, at the appointed time, which was early enough for us to give them the tour and spend some time in the cockpit chatting. Both James and Molly are the kind of amazing people who leave you feeling like you’ve done nothing in your life. It was nice to spend time with them.

We headed out to SFS and caught the last of dinner. With a more open-ended schedule, we were able to get to know people a lot better. Heidi, the woman in charge of the whole place, used to live aboard her sailboat in Philadelphia. From there, she moved to a houseboat in Puerto Rico before selling up and moving to the Turks and Caicos to run the SFS. She made us promise to tell any other boaters we knew that they are all more than welcome at the SFS.

Following dinner, the students were given their assignments for the evening to prepare for a public outreach day the next day. We joined the staff at their partitioned off section of the school for more socializing. Relieved of the need to set a good example, everyone seemed to suddenly be holding a beer. Beer is pretty expensive in the T&C, so I was surprised to see an apparent abundance. Well, it turns out most of the staff have become home brew enthusiasts as a way to keep costs down. Their craft is now getting quite advanced. Maryanne and I shared a Presidente (beer) to keep from dwindling their limited stock, but we did get to taste a couple of their own varieties and I must say they were pretty good. [Maryanne]A big thank you to all the staff and friendly faces at the SFS - you made our trip there so much more amazing!