[Kyle]A frontal system coming off the U.S. east coast was forecast to bend the trade winds form their usual east-northeast toward the south for a few days. This would mean strong headwinds for us, so we pulled in for a stay at Southwest Reef, just before the drop-off to deep water.

Although the sea was generally rough, we were able to tuck in close enough behind the breakers on the reef to have relatively calm seas at anchor. We also had the benefit of lots of wind for the wind generator and no bugs.

Since we were here for a while and since the place had "reef" in the name, I donned the snorkel gear and had a look around. Once I determined that our anchor was well enough buried to take the high winds and swell, I headed up-current to a thin strip of sand that I had spotted from the deck before I left. It hadn't looked so far from the boat, but it was a long way to that sandbar. Every time I stopped to rest, I would start losing ground, so I had to just keep up the hard swimming.

After an hour and a half, I finally climbed upright on wobbly legs, pulled off my fins and made the twenty step stroll to the other side, reveling in my little accomplishment. I plunged back in and the current floated me back home with hardly a kick in half an hour. The sea life was much the same as the stuff we saw on the Caicos Bank: lots of grass, some sponges and a whole lot of conch.

As we were lounging in the cockpit that afternoon, a tour boat appeared, anchored nearby and disgorged a load of snorkelers near the breakers on the deep-water side of Begonia. I suppose conch are pretty interesting if you've never seen that sort of thing before.

After they left, the sun went down and we were treated to a magnificent starscape with only a couple of lights on the horizon from distant Provo.

The next morning, Maryanne went in for a swim while I made coffee. She returned shortly thereafter reporting all manner of underwater wonders. It turns out those snorkellers had been looking at more than conch after all. I joined her and she took me to see a vast underwater world of coral heads and darting multicolored fish. I was exploring a nook when I came across a very nervous looking lobster. The variety you get down here is the Spiny Lobster. It seems to me that the poor things got short shrift when it came to self defense mechanisms. Maine Lobsters have those giant, muscular claws they can threaten to snap off a finger or two with if you get too close. Spiny Lobsters' primary defense is to look pathetic - like a kid wearing glasses. Secondarily, they can point their long, spiny antennae at you and if it gets really bad, they can click them together to make a somewhat loud noise, which they almost never do. We decided to leave him to have lunch and moved on. 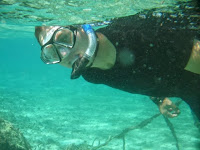 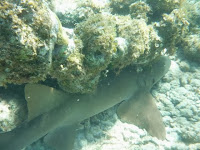 Snorkelling about with the sharks

A bit further on, Maryanne spotted the first of two Nurse Sharks, lying motionless in the sand at the base of a coral head. This animal was about four feet long and beautiful. They have the most amazing purplish skin that shimmers in the light as if it were made from countless microscopic sequins. Then there's the eyes; they have no discernible structure - no pupil or iris - just a uniform circle of turquoise. We spotted another slightly larger one a little later on doing pretty much the same thing. It seemed to be paying more attention to us and when it looked like it was about to startle and abandon its spot, we left it alone.

The last big find was a very large Eagle Ray with a very long tail that lazily circled us at just the limit of both camera range and our ability to keep up with our madly paddling feet. We arrived back at Begonia grinning and exhausted.

Since we had so much exercise already and since we hadn't even had breakfast yet, AND since we would likely be in the open sea on opposite schedules the next day, we decided to push the Thanksgiving holiday forward a day and have our traditional thanksgiving meal of a ginormous pot of potato soup. I'm definitely thankful that I get to have enough days like this to more than make up for the other days that I spend in the engine compartment manufacturing dirty words in bulk.

How great that you two were able to spend the holiday together, without having to worry about watch shifts, just enjoying each other, your potato soup :-), and your beautiful surroundings! Can’t wait to see the pictures, and I’m definitely intrigued by the centuries-old graffiti. :-)

Hi Footprint crew, just want you to know my wife and I are reading your blogs and am enjoying them very much. Note: Kyle, we met you once at JDD's house in Richmond several years ago.
Regards,Stefan

How fantastic! No need to ask if you had a good Thanksgiving; you had the best possible holiday as you were together and exploring somewhere new and beautiful. Miss you guys!

Hi Stefan - glad to have you on board (virtually) - of course we remember you.

Karen - we posted pictures on the graffiti

Kate, oh yes another unusual holiday aboard - and more potato soup for Kyle