[Kyle]We were up bright and early the next day. Okay, not really. It was 10:00. We had no real plans, except to see what’s what in the town and to fill our water jugs for topping up Begonia’s tanks.

We landed on the beach next to a lifeguard tower and dragged the dinghy through the soft sand to way above the high tide line. We filled the water jugs, and then wandered into the town center where we found a selection of restaurants and shops selling souvenirs. We found a fruit stand and were given a tip about a farmers’ market a couple of miles up the road that was about to start. We were now on a hunt for mangosteens, our favorite item from the Puna farmers’ market on Hawai’i.

The market had a good selection, including lots of tasty lychees, but no mangosteens. We were told the season was over. Ah, we’ll have to appreciate the ones we had even more now! 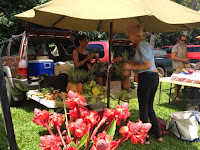 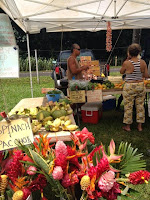 Back at the beach a few hours later, we dragged the dinghy back down to the water (marginally easier than up) and got her afloat. Maryanne was behind. I was forward in thigh-deep water looking back at her. I was about to jump in when Maryanne told me to wait first for a wave to pass. The pudgy rose up and fell and I pulled myself in. Then the WAVE hit. It was a huge ten-foot (well, OK, maybe two-foot) breaker. It landed on my shoulders and exploded into spray that filled the dinghy ¼ with seawater and another ¼ with sand. I was then turned sideways and subjected to three more in rapid succession. One of them rolled the dinghy onto one of our oars and snapped it. What had started as a slightly wet beach launch had rapidly turned into a terrifying beating. With help from a couple of sympathetic sunbathers, we pulled the pudgy back out of the water and let her drain as we used a kid’s beach bucket to slosh the sand out.

Our second launch went better. Maryanne used the remaining oar up front as a paddle while I used our emergency backup paddle on the opposite side canoe-style. We arrived at Begonia shaken, wet and covered in sand.

A quick rinse and a change of clothes and we were good as new. We got out the Torqueedo electric motor, mounted it on the dinghy and headed out for a trip up the Hanalei River. Starting at the busy beach, we passed paddleboarders and kayakers in decreasing numbers until, for the last hour, the whole river was ours as it meandered through the trees past fields of rice fringed with coconut palms. We got to the bridge at the main road, turned around and retraced our course at twice the speed with the current behind us.

The tide was significantly lower at the bar (where the river meets the sea) and we had to tilt the motor up so that only the bottom half of the propeller blade was in the water to keep it from digging into the sand. We got home just in time for sunset. We had run the Torqueedo continuously for most of the afternoon and it was still at 70% charge. Crossing the bar could be a little exciting, but not nearly as much as launching through the surf. Even though it was farther, keeping the dinghy in the river for the day seemed like a better deal for the rest of the week.