[Maryanne]With no obligation to make the most of having a car, we had planned a later start to today - unfortunately the full moon celebrations had fireworks at 5am on the beach. OK, we're up!

[Kyle]Begonia was pretty much ready to go to sea. Our last day was spent tying up a few loose ends. We took the dinghy into the river, gave it a good hose down, and filled our last water jugs to the tippy-top. We took long, cold (well, lukewarm) showers at the beach and then headed out for our last shore meal for a while.

I had wanted to have a Mai Tai at Tahiti Nui since we got here. It’s kind of a dive, but it has a certain tropical charm to it, helped along by scenes of George Clooney there in "The Descendants". We lucked out because Andy and Robin have a couple of friends who live here, Chris and Daryl. They used to have a 40’ mono-hull and have sailed with Andy in the BVI when he was doing that sort of thing, before discovering the joys of power boating. Daryl had just got home from the mainland the evening before after being away for a while, it was amazing that they were able to find the time to meet up with us for lunch at Tahiti Nui before we left.

Well, the Mai Tais were very every bit as good as I had hoped as was all of our delicious food. My Panko and Furikake Encrusted Ono was especially marvellous!

Along with being great company, Chris and Daryl were kind enough to drive us to the market for a last bag of groceries before driving us back to the dinghy at the now crowded river/beach park, where they saw us off. Oh, Hawai’i, we will miss you. Now we’re back aboard. It’s time to put the Pudgy in lifeboat mode and hoist it, rig the jacklines and other safety gear and pre-do as much of the checklist as we can. {We've also installed the cockpit enclosure which we'll appreciate at sea as we head north - right now it is hard to appreciate a greenhouse in the tropics and I'm sure all our neighbours thing we're crazy!}. We’ll get a good night’s sleep and we’re off tomorrow, sailing by the Na Pali coast for one more look before turning north into the open ocean. 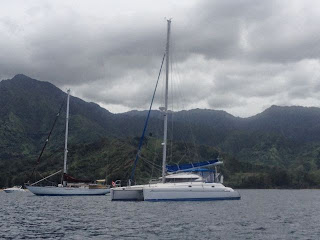 Begonia - ready to go! Next stop California?
Posted by SV-Footprint at 1:56:00 AM