[Kyle]After a good rest under the backdrop of Ha’ena, we motored a few short miles upwind back to Hanalei Bay. Many of the boats sailing back to the mainland call at Hanalei as their last stop in Hawai’i before setting off. Because of this, the place seemed much more active than it would seem looking at a road map of Kaua’i. 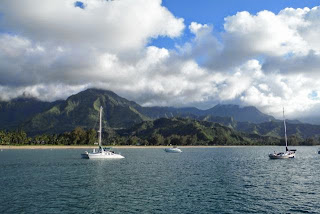 The anchorage had two dozen or so boats tucked into the protected eastern half of the deep bay. We picked a spot in shallow water right at the edge of the buoy line delineating between the anchorage and the swimming area on the beach.

Halfway through the process of putting out our chain, we noticed that we had anchored right next to Cliff on his catamaran Rainbow. We had first seen him in Hilo and later in Lahaina. There are a lot of Catamarans in Hawai’i doing day tours with their decks packed with tourists. We have seen only three other boats out cruising the islands this year and Cliff’s is one of them.

He swam over and we spent the evening catching up. He has generally done longer sails with fewer stops than we have. To add to the challenge he is also a solo sailor on these long passages (huge kudos). He has already been in Hanalei Bay for three weeks and will probably stay a week or so after we have gone, as many of the competitors of the Solo TransPac race will pass through here from about the time we leave. Cliff has completed in this race in the past and was a wealth of information on the area (and San Francisco). It was good to be able to pick his brain about the ins and outs of the place.

After the sun set, all of the activity on the beach stopped and people went home. We were left in a quiet little bay with only the lights of a few houses and a small constellation of anchor lights as the only signs there was even anybody else around.