[Maryanne]From our hotel we invested in a BIG breakfast (expecting to eat very basic food on the trail itself, this would be our last chance). To get to the trail from the hotel (even though our hotel is within the park) without a car, we needed to rely on park transportation which involved a bus from the Wuksachi hotel to the Lodgepole Visitor center, then on to another bus to the Giant Sequoia Museum, and finally a 3rd bus to the Crescent Meadow Trailhead – a distance of maybe 10 miles, and a journey time of 1.5 hours. Since the buses didn’t even start until 8:00, this meant we would not get the early start we’d like, but at least left plenty of time for breakfast. 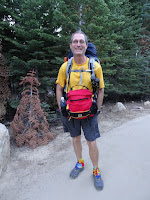 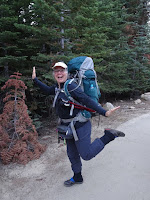 Before we start - feeling fresh and ready 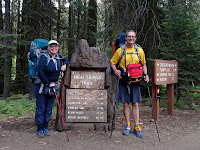 At the trail head and our first giant Sequoia trees

The goal for day 1 is a 12 mile (up hill) hike – starting at 6600’ and we need to reach 7500’ via a ridge called Eagle View with a view of Kaweah Canyon and switchbacks at the end to Bearpaw meadow. We arrived a little after 6pm, leaving time to setup camp and eat before dark. Aside from the ‘hikers camp’ Bearpaw meadow also has a swanky catered private campsite with supplies delivered via mule train, one of which we had to pass as it descended and we climbed. That site had amazing views down into the valley, but we were tired enough and happy to just rest up and put all our gear to work – so we didn’t begrudge them their spectacular views at all. 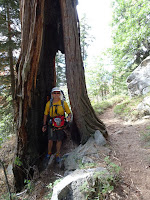 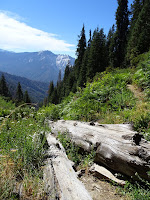 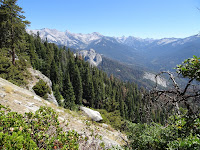 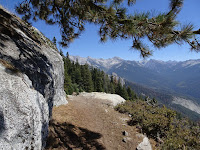 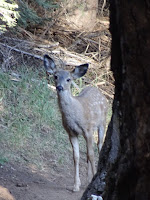 Scenes from Day 1 on the HST

We saw our first deer as we arrived, but they were readily spooked by us.

By the end of the first day we were both feeling a little overwhelmed by what we’d taken on. It wasn’t as easy as we imagined, and we were both happy that our requests for a John Muir Trail permit failed (i.e. we were not at day one of a 25 day hike – only an 8/9 day hike). Kyle came to understand that the map (from which we’d done our planning) had incorrect mileage (always indicating shorter distances), and we ended up hiking much further than the planning had anticipated. It was nice to have something other than our lack of fitness to blame for our tired legs.

Email ThisBlogThis!Share to TwitterShare to FacebookShare to Pinterest
Labels: National Parks, Off Boat Side Trips, USA-CA