[Kyle]I had been promising Maryanne ever since we came up with the idea for our hike that it would be all downhill on her birthday. In the planning phase, it looked like it would be easy; 2.8 miles with a 1,600 foot drop. We had run out of food the night before and we carried just a small amount of water, so our packs were each as light as they have been the whole hike. Still, we were tired and sore and we hadn't had any breakfast, so it was still longer than we would have liked at that point.

It was easier to appreciate Lone Pine Lake in the morning

As we descended into the forest, dirt and decaying leaf litter finally started to fill the gaps in the boulders with soil, gradually turning into a nice, dirt path. We met several day hikers starting their climb and really felt for them. That trail is relentless all of the way to the top. Even the only downhill bit between Trail Crest and the junction with the summit trail is so steep as to be hard on the knees. I know we had just walked over 70 miles across the Sierras with heavy packs, but I could not imagine trying to do what they were doing. 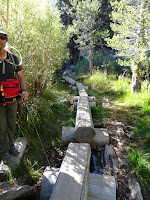 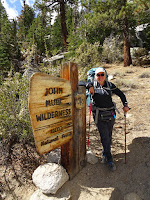 A short hike down, still with splendid views

We stepped off of the trail onto our first pavement in nine days, the parking lot at Whitney Portal. We were amongst day hikers and people who had just driven up there to escape the heat at lower altitudes. Nobody knew what we had done. There was no welcome and no fanfare. We were just a couple of smelly hikers with dusty packs.

We limped to the Portal Store for breakfast. We had been told they have giant pancakes. It turns out we had just missed breakfast - lunch only. So much for that craving. We settled for burgers (mine was veggie) which are also legendary amongst hikers dreaming of their first real meal in civilization. They were okay. It was nice to have real food, but I wouldn't have driven up from town for one.

We finished up and headed to the spot the woman in the store told us was the best place to stand for hitchhiking. No sooner had we stuck out our thumbs than a woman in an SUV behind us backed up and asked if we needed a ride. She was literally the first person we saw. Great!

We piled our stuff in, got into the truck, drove 100 feet and then sat for half an hour while we waited for uphill traffic to pass through a one way construction zone. Our driver, Sherry, immediately made us look at each other and feel like we hadn't done anything.

She had started the climb from Whitney Portal at midnight, climbed (basically run) 6,200 vertical feet to the top, and returned the SAME day, a distance of over 20 miles. We found out she did stuff like that all of the time. She's the kind of person that would roll into town, find out there's a marathon tomorrow, and sign up, even though she just did one on Monday.

She was really nice and the descent to Lone Pine, way down at 3,900 feet, was too short. She dropped us in the middle of town (between the two buildings). We walked to the nearest motel with a vacancy sign and checked in. The proprietress was kind enough NOT to act like we were two homeless people. I made a point of returning with some minor request after showering and shaving so that she could see that we were at least adjacent to being fine, respectable citizens.

We went for a walk through the town buoyed by both the thick air and by not having to carry our accommodation with us. We perused a few menus and ended up at a Mexican restaurant that looked nice. We made a point of ordering everything on the menu that looked good.

Afterwards, we stopped at the grocery store for a bottle of wine to take to our room. Maryanne enjoyed a nice, hot birthday soak and I lay on the bed luxuriating in it's giant, soft, flatness.

{Maryanne}Of course, we still had to get home, and that involved more buses and yet another rental car; but it was a relaxed and happy journey as we'd DONE IT!!

Email ThisBlogThis!Share to TwitterShare to FacebookShare to Pinterest
Labels: National Parks, Off Boat Side Trips, USA-CA