[Kyle]On our last week in Jack London Square, it really would have been nice to be able to sit back and enjoy a last dose of the place before we left. There were too many jobs left to do, so it ended up being a pretty busy week.

The main task we wanted to complete was replacing the plexiglass on all of our hatches. They were all pretty badly crazed from spending years in the sun, so they were all pretty hard to see through. We had initially fantasized about replacing all of our hatches, but once we priced that up, we decided to go for the much more economical and less invasive hatch refurbishment.

The work was broken down into basically three steps:

The first was to get the hatches apart so that we could even access the lenses. The covers are connected to the frames with a friction hinge. All of our old hinges were so worn and stiff that they had to be pounded out in pieces using equal parts hammering and swearing. It took me a whole day to free the first one. Experience got the last one off in an hour. I can still swear a LOT in an hour. 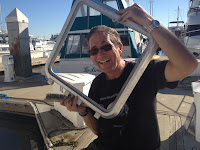 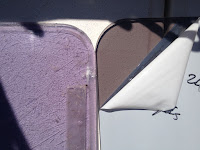 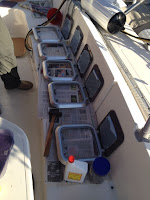 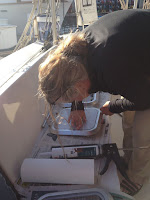 Step two was getting the old lenses out. Like our big wrap-around windows, the only way to do this was to cut and pry them out. Luckily, we had all of the tools we had used for the job on the big windows, so that wasn't too hard. The real pain was removing every speck of the old silicone from the frames. We would cut as much off as we could with razor blades. The rest had to be laboriously removed with wire brushes. Our six big hatches took about three hours each, the five little ones were each about an hour.

Once those were all off, we had eleven big holes in the boat that would have to be plugged before we could leave Begonia unattended or before it rained. Caulking and putting the new ones in only took a few hours. We let everything set overnight and in the morning, we removed the tape and the protective covering.

It was AMAZING! Afterwards, when I would look at one of them, I kept thinking I forgot one. Nope, it was just clean.

In the middle of all of the work, we had guests and visitors, who were trying to get in one last visit before we sailed off of the planet. It was nice to have an excuse to pause the work for a bit.

Email ThisBlogThis!Share to TwitterShare to FacebookShare to Pinterest
Labels: Maintenance