After pulling up anchor in Raiatea, we left via the Teavamoa pass into the open sea and reentered at Teavapiti Pass. From there it was smooth flat sailing through the winding channel between the two islands and towards Hurepiti Bay where we’d reserved a tour for the following day. 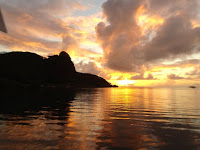 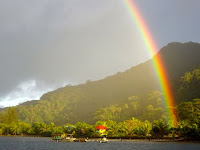 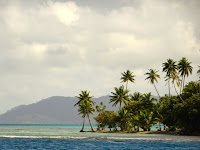 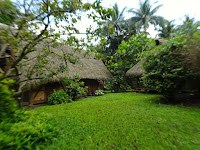 An evening sunset, and morning rain brings a brings a rainbow in the bay before we arrive ashore for our tour

When Maryanne had called to book, we believed we’d exchanged all the necessary details but were cut off towards the end of the call and were unable to reconnect. When we arrived at 1pm, we found that the mooring ball was not free until 4pm, an important bit of information we’d missed from the truncated call. We briefly looked in the bay for a spot to anchor, but it was deep water with several boats already anchored. We decided instead to go to the nearby reef for lunch and a snorkel.

Eventually, we were ready to relocate to the vacated ‘Vanilla Tours’ mooring ball and went ashore to introduce ourselves to Alain (the owner of the property) and take an evening stroll.

That evening, we met with the other party that was to join us on the morning tour, and we agreed we’d start a little earlier to accommodate their tight schedule.

It rained all night, but thankfully stopped just before our dinghy ride ashore for a 7:30am start. There had been LOTS of rain there and the morning light greeted us with a double rainbow – but luckily we had a dry tour.

Now Alain has retired, tours are now led by Noah (Alain’s son) and both guys are very welcoming and knowledgeable, they answered all our questions and were very amenable to all requests made.

The tour was described as an ethno-Botanical tour of Taha’a and some of the highlights included seeing vanilla plants manually pollinated (by Noah), nibbling on an assortment of fruits, and a trip to the Pari-Pari rum/vanilla distillery.

It turns out that vanilla is a very labor intensive crop. If the flowers are not pollinated they drop within a day of opening, and if the fruit pods aren’t collected at as soon as they are fully ripe then they drop too. So the every plant in the plantation has to be visited every day just in case any action is required. It seems that farming vanilla outside of central America was impossible until relatively recently when it was established how to manually pollinate the flowers (in the absence of the native bird that does it naturally in central America). 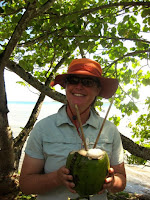 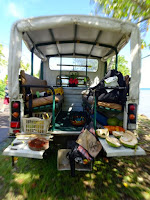 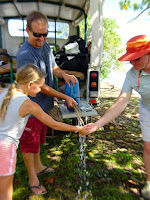 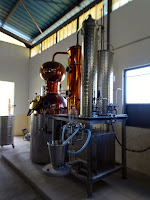 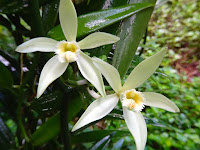 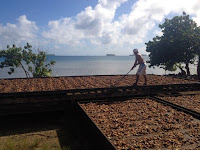 Quite the education (and we were fed too)

After the tour it was our turn to leave the mooring ball to make way for the next group, so we returned to our familiar spot by the pass for a snorkel before the sun set behind Bora Bora (our next destination).

Not surprisingly during our snorkel there was a heavy downpour. This would not have been an issue, except that we’d left the hatches open to try and air out the boat. When we returned from our snorkel we found our laptop sat open on the table and covered in rain. Thankfully the computer still booted up, but the trackpad took the brunt of the water and decided it would no longer play. We can verify that not much can be done on a Mac without the ability to click on the mouse pad…. UGH! 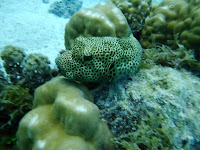 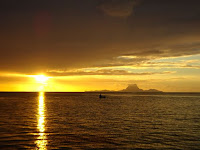 Snorkel & another great Sunset
Posted by SV-Footprint at 10:36:00 PM