[Kyle]Leaving Port Phaeton, we headed out Passe de Teputo into the open sea for the downwind sail to Baie Mara'a, on the southwest corner of Tahiti Nui. We planned the day so that we could continue if we got there and found it unsuitable. On the chart, it looked like it could be a similar situation to the anchorage at Bassin Teahupoo. What we found when we got there was much more usable. The reef was bordered by large shelves of white sand and we were able to set the anchor in 7m within easy snorkeling distance to the large reef.

The best part was the view. From the cockpit, the jagged skyline of Moorea dominates the horizon to the northwest. Its steep spires look like a grove of trees where a couple have fallen over. Just to the left of it, the setting sun sinks below the horizon. 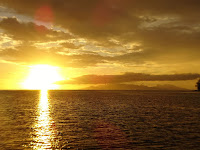 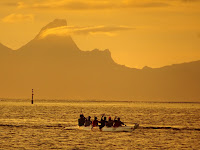 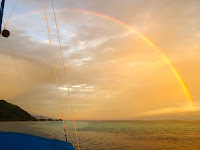 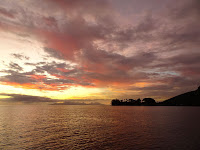 In the morning, the wind had picked up and we had a really slow, wet dinghy ride to shore to see what was there. Maryanne found a 41 year-old Cruising World article with a two-sentence reference to the Mara'a Grottoes. She checked the map on her phone and it was still there, so now we had a goal.

There was a sign on the road and a little pulloff with space for about eight cars. A path led into the jungle to a big cave full of water with vines hanging down over the entrance. We were all prepared for a cool, freshwater swim, but instead found a barrier and a sign saying, "Attention! Chute de Pierres". Well, merde! Now we can't go swimming because somebody failed to dive out of the way of a rock sometime in the last four decades. 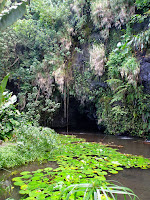 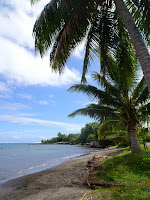 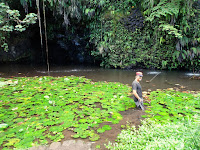 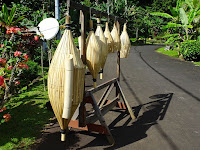 At the next one, we found the sign and barrier so far back as to barely be able to see the grotto. The third and last one had no blockade and was fronted by a lovely lily pond that looked to be about four inches deep. Off I went.

First of all, the clarity of the water makes it look much shallower than it is. Two steps in and I was up to my waist. The awful part was that the bottom third was oozy mud. Eeewww! Swimming cancelled!

We decided as a consolation prize to look for another grotto higher up the mountain. We stopped by a local sandwich shop where the nice woman there explained that you can't get there from here. Okay, then we'll have a couple of sandwiches. Maryanne got a nice barbecue chicken. I decided to get fancier and added cheese and fries. Her sandwich was fine, but mine had two little pieces of chicken and a whole lot of strange and unwanted meat. I'm still easing my way back from vegetarianism and that was a bit too much all at once. I think I had a heart attack on my third bite.

We did some more wandering around and found the village of Mara'a proper. The grocery store was closed for renovation. The convenience store was closed. The only thing open was a store selling beautiful brightly-colored sundresses, which I assume must have been for weddings based on the prices.

Further down, we came upon the public pier and park. There lots of kiteboarders were setting up for the day. Like surfing, it looks like the kind of thing that would be a blast if you were good at it. We watched them for a while and then headed back to Begonia. 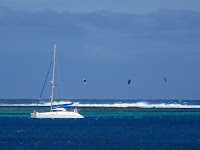 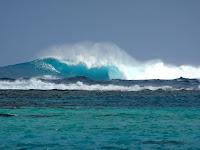 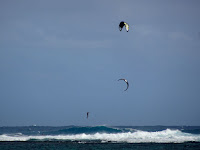 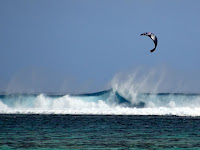 Watching the kitesurfers and the dramatic surf

At home, we found ourselves in what appeared to be the warm-up area before they went out the pass into the big surf outside. Then we were treated to some pretty amazing acrobatics as they cavorted in the ten-foot breakers. 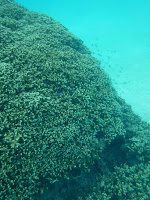 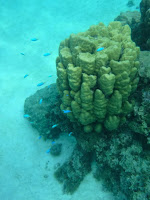 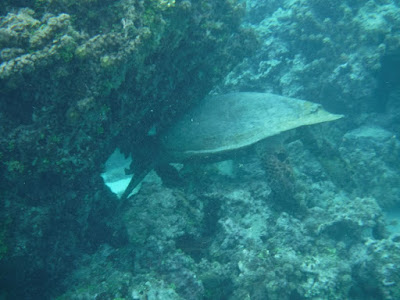 Snorkelling during our time at Maraa

The following day it was windy and rainy. I decided that wouldn’t be too big of a deal snorkeling, since I would already be wet. The reef at Mara’a is extensive, so I had a lot to keep me occupied. The underwater landscape between the lagoon and the ocean had lots of peaks and valleys to explore. My big find of the day was a sea turtle who was so focused on munching away that she failed to see me approach. When she did, I spun around to give her some space and she was gone. I searched and searched, but never found her again.

The views are absolutely breathtaking. Hard to even dream that up from my vantage point in the heat of the southwestern US desert. Thank you for sharing this beauty.