[Kyle]In the morning, we went downstairs for breakfast in Villarrica. We were ready to go at the early end of the range given to us by the proprietor for the morning meal. Conspicuously, there were only two place settings in the whole dining room. We HAD been the only guests in the whole place. Unbelievable! It had been Saturday night at a beautiful resort town. The place was clean and charming and, instead of being a few blocks back, the only thing between us and the lake was a road. The price was low for what we got and yet we were the only ones there. I would have thought they'd be booked weeks in advance. The school year started the previous Monday and everybody went home. When they say low season in Chile, they mean low. 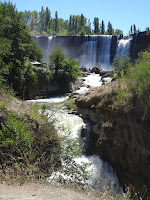 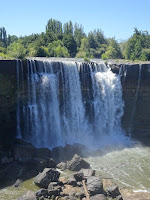 We made a lot of driving distance, but left the main road briefly to grab a view of this beauty (Laja waterfall) and some lunch

Our route descended out of the hills into the valleys of wine country. Driving through wine country here is surreal for anyone that has been through California wine country, because the two are pretty indistinguishable from each other. Long straight rows of vines cross golden hills at angles that make them appear to curve downwards towards pastel colored estates surrounded by flowers. The roads are smooth and dotted with big green signs directing traffic to places called Santa Rosa, Tiburon, San Rafael and Los Angeles. Billboards are everywhere advertising tastings and vineyard tours.

We drove through the very charming little town of Santa Cruz, trying our best to ignore its charms. It was running late by then and we were hoping to get in a tour at the vineyard where we had booked our room for the night.

When we arrived, the guy who checked us in said we were too late for the tour, but he would see if one would be possible the next day before we left. From his subsequent description, it seemed like it would not so much of a vineyard tour as a wine tasting. Since we would be driving afterwards and not sleeping, we decided instead to try one of their wines with dinner and guess at a couple more to take with us.

We were assigned our room, which again seemed to be the only one occupied in the vicinity. Not again! We decided to spend the last of the daylight wandering the manicured grounds and strolling along vines plump with different varieties of grapes ready to harvest. We each snuck a taste of the raw fruit and declared Chardonnay our favorite. {Maryanne: It was quite the hotel, swimming pool, tennis court, large fire pits for cook-outs, the vinyards (obviously) and bicycles to tour the grounds. Inside were snooker tables, books, games, and plenty of places to lounge. Unfortunately the bar didn't have any service or we would have started on the wine much earlier} 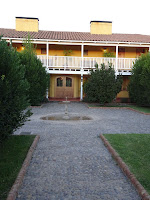 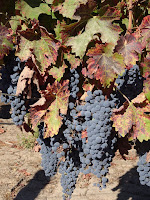 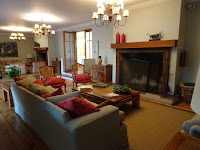 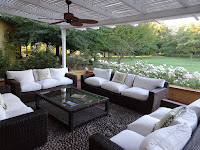 As we were lounging on the big comfy chairs in the garden, we overheard another couple seeking in an English accent. We weren't the only guests there! Their room was the only occupied one in the wing on the other side of the lobby from ours. They were polite enough, but not particularly gregarious, so it was a little uncomfortable at dinner to be sat at adjacent tables in a room as quiet as a library while pretending we can't overhear each other's conversations. During one occasion when the imaginary wall was down, we asked them about the wine they had brought in with them when they arrived (we had ordered a bottle with our meal). They said they bought it after the wine tasting fifteen minutes earlier. What?! The guy just said...Auugh!

Anyway, we had a lovely restful night followed by long, hot showers and a eerie solitary breakfast, which was still made a little uncomfortable by our the proximity of our server, who was trying her best to keep close tabs on us while trying to appear not to. It didn't work. It was weird. Time to hit the road.

On our drive through Santa Cruz the second time, we happily succumbed to its charms. First was the museum. What an absolutely unexpected gem! I've been to a lot of museums, many of them after being dragged by Maryanne, but the museum in Santa Cruz is my favorite museum EVER! I'm including the American Museum of Natural History in New York City and the Smithsonian Air and Space Museum. It was enormous and had the best collections of so many things that I have ever seen. Most impressive to me was the pre-Colombian art. I have seen a few carvings here and there, but nothing like rooms after rooms of the most intricately detailed and delicate pieces they have here. There were so many objects that were built like ships in a bottle whose detail could only been seen with magnification. 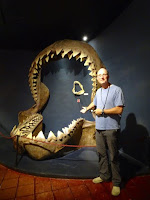 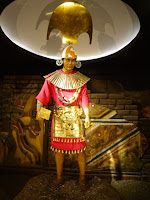 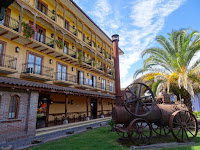 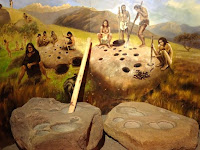 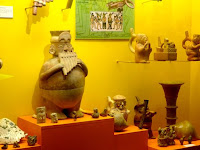 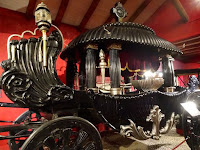 Another thing that surprised me was the textiles. They went way beyond weaving complex patterns. There were tiny voodoo doll-like representations of people. They were the size of a fingernail and they each had unique and individual dress and expressions. Some had tools. Some had weapons. Hundreds of these were then used as fringe at the edge of an equally elaborate cloth. They also had a knitted hat that had a whole 3D scene with three weavers working around a loom making even smaller hats on top, all in wool! I had no idea...

{Maryanne: Another extensive exhibit here recounted the story of the 33 miners rescued from the 2010 Copiapó mining accident after being stuck underground for 2 months. Both Kyle and I were glad there weren't too many other visitors allowing our tears to flow freely.}

Before leaving town, we stopped for lunch at a restaurant where the chef and owner treated us like treasured long-lost friends. He fed us more than we could eat and when we told him we couldn't possibly find room for dessert, he brought us a couple of them anyway.

We hit the road feeling like we really should have gone on foot to burn off our meal instead of lazily driving a car to Santiago.