[Kyle]On the first clear day after getting home with spare parts in my suitcase(s), my first main job was to repair the starboard shroud. Even though I had run lines to take the load off and the shroud was sagging, it was still a little disconcerting to go up the mast and disconnect the top end while I was up there. As I was doing that, the wind picked up and it got a little choppy in the river. The polyester lines that were supporting the mast on the starboard side stretch more than the steel cable does, so the mast started swinging slightly while I was swinging from it, which made the situation seem much less secure than it was.

{Maryanne: The problem 'shroud' is one of the 3 critical wire supports that hold up the mast, quite important! To do this fix, Kyle had to climb up the mast and disconnect it - but only after rigging a bunch of other stuff that would hold up the mast in the meantime! Once it was disconnected he could trim it back to 'good wire' and then install the new parts. We were very lucky in that our neighbours aboard Sea Rover II had recently done the same fix and gave a few excellent tips and a heap of confidence. This along with the advice from our US rigger gave us (Kyle) a lot of moral and mental support for the job (which turned out to be quite straightforward - thankfully).}

When I got back down, It was time to cut the shroud to the right length with a hacksaw. This to me causes the same feeling as drilling a hole through the boat. I don't like it and I try to avoid it at any cost. It needed doing, though, so I reviewed the repair procedure several times and made triple sure I didn't screw up the cut and ruin the shroud.

Maryanne helped me assemble the terminal and we're both pretty happy that it is stronger than the one on the port side now.

I went back up and reattached it. I was worried something terrible would happen, like it would be mysteriously too short, but it fit just perfectly. I was still being thrown around by the chop and it was a huge relief to get the mast hooked back up to its designed support mechanism.

It took another hour or so to re-tension and re-tune the rig, making sure the mast was perfectly straight and centered. Maryanne said, "Great! Now we can go sailing. We just can't anchor." She has a way...

So, the next day, I replaced the windlass.

Putting the thing in place was easy because it was the same model as the old one and the blots fit through the old holes. The tricky bit was the wiring. The wires are big, carry a lot of current and live in the anchor locker, which means they're almost constantly wet with salt water. It was important to slow down and be very meticulous about going through all of the steps to make proper bulletproof (waterproof!) connections and make sure they were thoroughly sealed. It runs beautifully and looks so shiny that it will seem like such a shame to use it and get it all scratched and muddy. I wonder what the chances are of getting Maryanne to do it by hand for a while...

The rest of the jobs that arrived in our luggage were minor and we were able to squeeze them in between the bigger ones. Now we're all fixed up again and ready to go somewhere AND anchor. 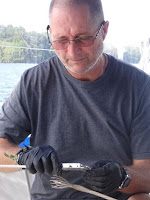 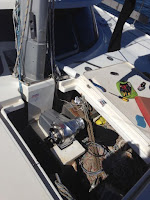 Kyle fixes the shroud and the new windlass
Posted by SV-Footprint at 1:53:00 PM

So glad to know you managed both these jobs and I also know there were other things that got fixed, fitted and replaced. It was so fun seeing you when you were here and at least I now know what a windlass is. I'll be sure to use it in my next Scrabble game.