North from Hiuehue to Valdivia

[Kyle]To get the timing right for the current through Canal Chacao, we had to leave Hiuehue the moment the tide rose to one meter above datum. For the previous couple of days, we had scanned the area carefully with our best binoculars each time the tide fell to below datum. That allowed us to scout a route that would get us over all of the shallow spots on our way out with at least 1/2 meter to spare. Even armed with our plan, it's still a little unnerving to be going anything faster than a crawl when the bottom rises and the number on the depth sounder starts plummeting. There's always a little stab of panic that I drifted off course until the number stops and then starts increasing again.

Hiuehue is a big basin with a narrow entrance and the incoming tide was boiling and swirling as it rushed through the gap. Even with both engines pushing us through the water at six knots, we were barely making one through the water. Sometimes, when it's turbulent, our depth sounder has a hard time hearing the correct echo from the bottom and I was worried it would become unreliable just when I wanted it most, but it stayed consistent. A handful of locals who were on the beach stopped what they were doing and came down to the water to stare at us for the long time it took us to fight our way through the pass. I was hoping they weren't waiting for us to hit some rock that they knew about, like gawkers at a car race who really came to see a crash.

If they were, we disappointed them and made it through just fine. The scary part came after the bay opened up as we were passing by the mussel farm in the shallows. I carefully retraced the track we left coming in, and knew it would be deep enough, but the water was two meters deeper then, so the readout on the sounder wasn't so alarming every time we passed over a shallow spot. 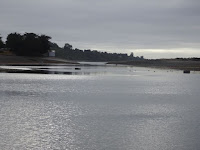 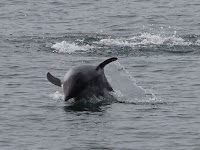 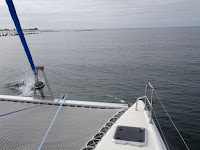 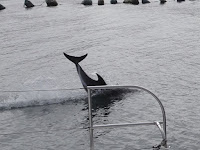 Once we were clear, we shut down one engine and powered over the flat Gulf to Canal Chacao.

We arrived right at slack water. Within a few minutes, the falling tide flushed us with increasing rapidity toward the vast open Pacific. The calm we were in before morphed into a chilly eleven knot headwind. It was actually the same weather, we were just going through it at eleven knots. Woo, hoo!

Going westbound, the canal widens, but it also shallows as it passes over a bar, so the current stays fast. All of the fun ends suddenly at the edge of the shelf. The current pushes into the swell coming from the west and it makes a huge mess of steep standing waves whose tops break in whichever direction is dominant at the moment. The wind also died for us there, which made the sails less effective at dampening the motion. Even though the waves were only two meters or so, It felt like we were getting thrown around in a storm with waves twice that high. We were relieved when we cleared the area, everything stabilized and we were able to have a mild to medium downwind sail up the coast. 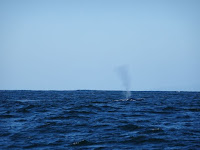 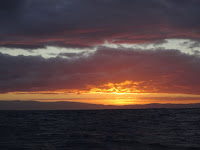 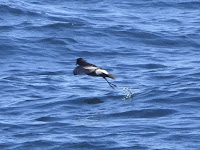 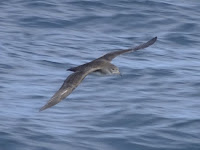 Once out at sea - Whales, birds and the sunset to enjoy

We made such good progress the first night that it looked like we would not need another for the trip as we had originally thought. We arrived at Bahia Corral, at the entrance to the Valdivia River right at low tide. I was hoping to get a good push from the flood, but the river always has enough fresh water flowing to be constantly in ebb - rising tide is just a milder ebb. 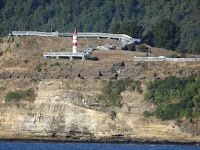 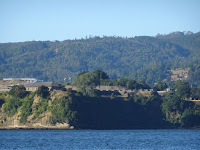 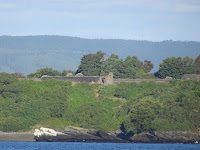 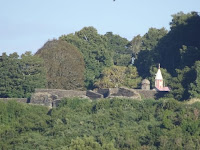 Once in the Valdivia Estuary - the place is littered with old Spanish forts (Corral, Niebla, Islan Mancera)

After dodging ferries and tour boats and fighting our way up-current to Marina Estancilla, we arrived in the last of the post-sunset twilight. We tied up to the empty end dock and had a good look around. It was a very pretty spot. The river splits and bends right near the marina, so we get long views up the valley past pine-studded islets. The place is damp and green and, except for an occasional vehicle passing on the distant road, the primary sound is of birdsong, some of which I recognize as being from the local parakeets. This looks like it will be a nice place to spend some time. 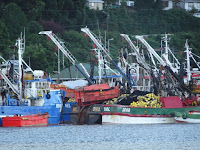 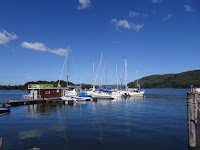 After the busy working boats in Valdivia River, we were soon moored in the peaceful Marina Estancilla
Posted by SV-Footprint at 8:42:00 PM