[Kyle]Morning arrived much too soon, but there was fun to be had so after a quick breakfast we were riding along the windy coast road in our rented scooter, stopping every now and then to snap photographs. The trip was punctuated by the occasional yelp and squeeze from Maryanne at corners taken too fast or stops taken too abruptly. It seemed we had the whole country to ourselves in the cool morning air. The roads were deserted until we joined the main highway and we noticed the first tour buses headed in the same direction. It seemed we would at least beat most of the crowds, but certainly not all of them.

We climbed the mountain pass and descended into a valley and after the turn off began to notice lots of the tour buses parked at a carpet store. “My brother’s store, he gives you a very good price”. When we arrived at the entrance for Ephesus we were pleased to find no parking fee for mopeds/scooters and found a spot in the shade to park the bike (taking the lead from the moped ahead of us). By now the parking lot had a dozen or so giant tour coaches parked, but no signs of milling crowds of tourists – strange! The gauntlet of stores between the lot and the park entrance were in the process of opening and some were alert enough to call out and offer us guidebooks, but most were still unprepared for the early arrivals. We bought out tickets and an audio guide and entered the site officially, the site was practically unknown for centuries and 150 years of excavation so far have reveled so many great buildings, many well preserved by their years of burial. 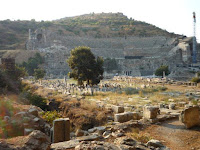 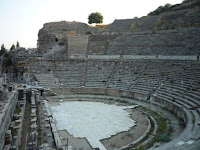 Lower entrance starts with scattered debris, but soon we find ourselves in the large Theatre
Our lonely planet guidebook had hinted that the best way to see the site was starting at the East entrance and walk downhill to the west entrance; as we had to return to the motorbike, and simply followed the signs to any entrance, we had started at the lower western entrance. At first there was not much to see (debris fields of columns and blocks and a few building foundations), but as we got further in we came upon the enormous “Great Theatre” a semicircle capable of housing 24,000 people and we mysteriously had it all to ourselves. So glad we arrived early. I was able to stand center stage and test the excellent acoustics that amplified my voice to all areas of the theatre stands. 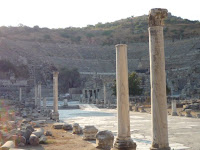 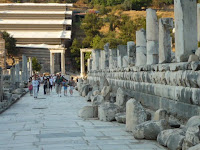 At first we are amazed to have the site practically to ourselves, and then we see the crowds descend from the upper entrance
From there we walked along “Marble Street” towards the Celsus library and it was here that we met the wall of people; tourists from those same tour buses, presumably dropped off at the upper entrance were now on their way down to meet with those empty coaches we saw on the way in. Almost all were wearing coloured stickers with numbers on them (indicating which tour group they belonged to) mostly we assumed from cruise ships docked at Kuşadasi, and almost all led by a guide carrying an umbrella or prominent “follow me” prop. The library was probably our favorite building at the site, it’s architecture beautifully ornate and covered with inscriptions. 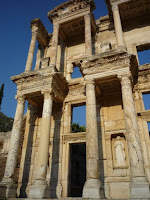 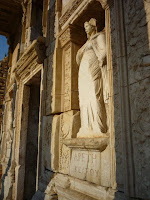 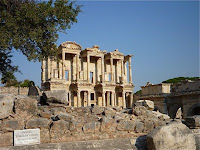 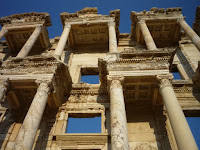 The library was our favourite Site
As we poked through the ruins and encountered one tour group after another we would find ourselves suddenly immersed in a crowd poking over people’s heads to find each other, then there would be a gap between groups and we’d have a site to ourselves for a short while. This cycle repeated every three or four minutes until by about 10am the place was just plane full. We appreciated the snippets of tour guide information we gleaned along with our (mediocre) audio guide. The site was splendid.

At one point we came across The Terrace Houses, a glass roofed covered portion of the site that required an additional entrance fee of 15 Turkish Lira, almost as much again as the entrance for the site (20TL). This site seemed neglected by tourists and was clearly not part of the standard ‘bus trip’ tour, so much so that the ticket collectors were happily out back having a long term cigarette break. Figuring we’d only be here once we forked over the extra fee and went in (with only one other couple to share the site with). We were so glad we did, it was just wonderful. The site consisted of several grand (and smaller) houses very well preserved with frescos on walls, and mosaics in the floors. It was also actively still under archaeologist reconstruction and investigation, but the extensive things to view were well described by frequent signage. Again we were amazed at the level of luxury and quality of life that people managed to achieve so long ago (1000’s of years ago). There were marble tiled rooms, central heating systems, hot and cold running water, fountains, bathing rooms with bath tubs and pools, dining rooms, etc. I would love to have had a chance to relax in any of these houses in their day. 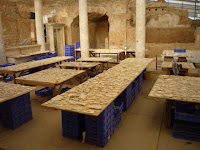 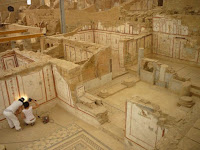 We were so glad we paid the extra to view the Terrace houses still under active investigation - note the big jig-saw puzzle
Maryanne was particularly taken with a giant jig-saw puzzle of fragments being reconstructed for a decorative wall or floor of one of the buildings. It really was a shame for the site that the tourists didn’t better patronize it, but we certainly felt lucky to both see it and to have it practically to ourselves on the day.

From there we returned to the crowds to view the rest of the site slowing heading up hill, against the stream of tourists. What impressed me about Ephesus was not the vastness of the site, nor the grandeur of the buildings, so much as the wealth of detail available to be seen. Unlike Paestum or Delphi it was possible to get a real feel for what life must have been like for the people who lived here; we could see the floors they walked on, the paintings on the walls of the rooms they dined in, and the sculptures and fountains of their gardens. The library and market place they would have visited and for the lower ranks, the fountains they would have collected water from. Once again cheers to Maryanne for her brilliant scooter idea.

The wind was beginning to build in the afternoon (for once good for us) and it was nice to be able to hop back on the scooter and ride home without having to locate and wait for public transport. We took the opportunity to make a couple of detours on the coast road on the way home, according to our whims. Maryanne returned the scooter while I got Footprint ready and we were able to depart less than an hour after I had originally intended, pretty good considering all we had managed to achieve.

We sailed back the way we came, retracing our path towards Samos, engaging in a neck and neck race with a British mono-hull, finally passing them just before they lowered their sails to enter the harbour at Pythagorion. We hugged the Turkish coast and continued south for a few more miles until we came across our anchorage at St Nikolo – another remote and quiet anchorage to ourselves. Here we settled down for dinner and a night long fight with the biting flies that drove us crazy and probably won the battle. I really think science should make eradication of horrible biting flies a priority. I don’t care if it turns out their dung holds the mountains together or some such thing, it should not be hard, my understanding is that all I need to do is to start getting people to re-post it as their Facebook status and we can eliminate the problem for good, just like cancer and bullying. 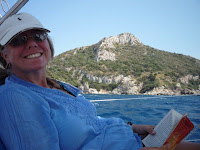 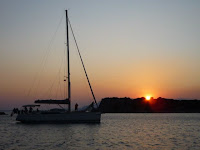 Beautiful Coastlines and pretty sunsets - but insanity causing flies joined us all the way
Still, the view was nice, and we had plenty of wind for the batteries and our computer. A big plus was that we were also able to connect using our Greek wifi card to the world at large and get almost up to date with the blog, accounts and other internet needs (while swatting flies with the other hand).

Email ThisBlogThis!Share to TwitterShare to FacebookShare to Pinterest
Labels: Turkey

Augghhh! Ephesus sounds amazing! So glad (and jealous) that you were able to visit this fascinating site - AND that you took advantage of the separately priced site. it sounded wonderful. and i agree with maryanne, i would go back in time in a heartbeat for the chance to experience those private dwellings as a (pampered)house guest! and getting there and back on a moped - c'mon! that was half the fun, right?

We really enjoyed our trip to Ephesus in 1996. What an amazing place, especially when you think that it was once a port city. The scattered state of the ruins made brought history very much alive. The vendors were something else, too. What a mess!