[Kyle]Sailing from Forbes Island to the Bird Islets was a pretty straightforward affair apart from one short crosswind leg to get around Cape Grenville. The rest of the time, it was a downwind, jib-only sail in big winds. The wind had increased in the past couple of days and was really heaping up a nice swell that was good for surfing. Otherwise, it was cloudy and rainy the whole way, which made the day seem rather 'blah'. Our spirits lifted when a pod of seven especially playful dolphins arrived to surf the waves with us. 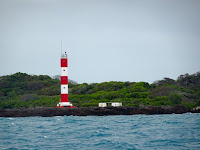 The mainland is slowly changing as we go north. Steep mountains are giving way to high dunes of white sand. The shore is made up of long beaches with few coves or inlets. Good anchorages are getting more widely spaced, so our best options are usually open roadsteads in the lee of one of the mangrove islands along the way. These are usually okay at low tide, but subject to swell at high tide, depending on the way the waves wrap around the island. The Bird group of islets is one of these.

As we arrived at Bird, what appeared to be a really torrential downpour passed just a mile to seaward of us. We caught just a few drops at the edge. We anchored at low tide in relatively smooth water behind a vee of coral. The islands are mostly mangroves, but the one nearest us had a couple of pretty looking patches of sand. 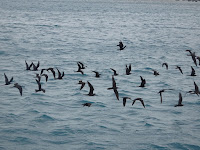 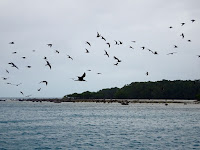 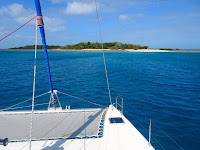 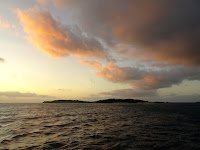 We both thought of going ashore in the event that the wind abated a bit. Closer examination of the beach uncovered four croc slides that were all bigger than the tracks we had seen on Fife Island. All four extended to the water below the high tide line, which meant they were made sometime in the last six hours. From Begonia, we couldn't tell whether they were going up or down. Then we realized, does it really matter? Either is concerning in its own way. We decided to spend the day enjoying the antics of the rafts of noddies after which the islands were named.