[Kyle]Happy that Eddie (‘our’ osprey) had made it safely back to his home island, we left Bushy Islet for the sail north to Mount Adolphus Island. Instead of being from way behind as it has been lately, the wind was just enough from the side to allow us to fly both the main and jib together, since the jib was out of the lee of the main. This made for some fast sailing, which was made even more so by a strong following current. 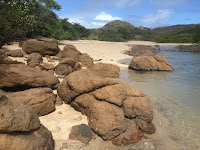 We had ships to contend with as well and had to wait to cross the main shipping lane until three had passed us at once, then move across quickly. It was right about then that Cape York finally came into view for us behind Albany rock. A couple of miles further, we finally crossed the line; we were now north of the northernmost point on the Australian mainland.

That was a hike. Australia's east coast is so long!

Australia (including Tasmania) is often said to be generally the size of the contiguous 48 U.S. States. That part of the U.S. is slightly bigger, but of course, the shapes are pretty different. The east coast of Australia (South East Point in NSW to Cape York) covers a span of almost twenty-nine degrees of latitude. If you go down to South East Cape in Tasmania, then the span is thirty-three degrees. By comparison, the U.S. East Coast from Key West, Florida to Eastport, Maine covers only twenty degrees. The U.S. West coast between the Mexican and Canadian borders stretches just under seventeen degrees. To go thirty-three degrees on that side of the continent would entail sailing between the southern tip of the Baja Peninsula and Petersburg, at the border between British Columbia and Alaska.

Since passing South East Cape just under six months ago, we have put just over 3,300 nautical miles on the log. If I recall, that's more than our entire circumnavigation of New Zealand. Apologies to our Kiwi friends, but it's really starting to look like Australia may be larger. 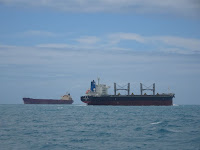 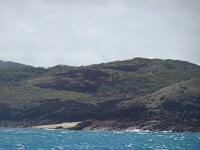 Sailing north things started to get busier, and then we anchored in a bay to ourselves.

Anywho…, we haven't sailed past Cape York yet, that's next time, but we finally made it north of it. Now we can finally stop our northward push, turn left and start heading west. In the meantime, we decided to stop for a couple of days at Mount Adolphus Island. The large, crescent-shaped bay there keeps the swell out. There is no infrastructure visible on that side of the island apart from a radio tower (not cellular, unfortunately) on the tallest hill, so it looked like a perfect place to rest up a little before heading to what will surely be our busy next stop.

We did do a quick trip ashore, though. On the second day's high tide, we rowed to the nearest patch of sand. We had some nice views, but the undergrowth kept us to the beach. We then rowed over to a rocky ledge on the other side of a stand of mangroves from where we had first landed. There, we were able to follow the bare rock quite a way up and around the bay. 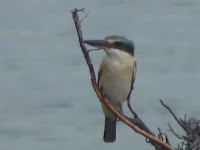 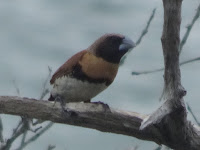 As soon as we approached shore the birdsong was constant and everywhere (although most of them we never did spot, we did see some that were happy to stop for a moment) 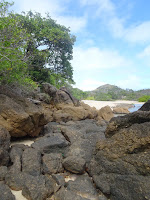 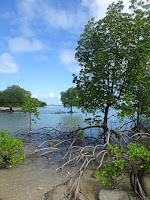 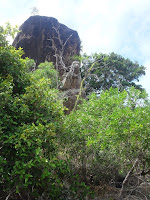 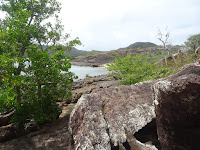 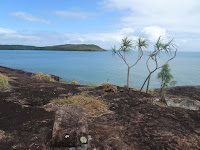 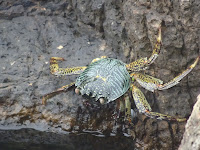 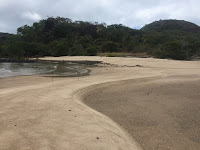 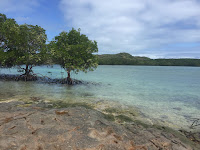 We tried to find a trail into the interior but failed and stuck with a coastal walk.

Along the way, we spooked our second live crocodile. We were pretty far up the hill from the water. As we came over a rise, I heard a splash about fifty meters below. I looked up just in time to see the nervous looking creature take a deep breath and dive into the murk. We never saw it resurface. Crocs can hold their breaths for hours if they are not too active. It was a good reminder to, a: Make a habit of keeping back from the water while walking and, 2: Resist the urge to go for a swim to keep Begonia's bottom paint pristine.

I think there will be another time to work on the bottom paint, heh? A coastal walk and reminder to stay away from the water’s edge seems a bit incongruent, but glad you made that note in your mental reminder section.
Safe sailing. Sending much love.

What's up. It's Tony Silva from XJT. Just thought of seeing where you are.