[Kyle]The wind forecast for the leg from Stanley to Fife Island turned out to be totally wrong. We left with reefs in the sails, expecting to be pummeled as soon as we left the lee of the island. We had this for ten minutes or so before it died and switched to the other side of the boat, rather than the increase we were expecting. We didn't trust it, so we waited a long time before we finally decided the spinnaker was warranted. 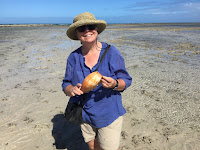 Once it was up and flying ahead of the mainsail, we had to chase each wind shift in order to maintain the narrow angle between having the wind too far forward to fill the spinnaker and so far aft that it collapsed in the lee of the mainsail. After a mile or so, we finally admitted defeat and pulled the main down and out of the way, which improved things quite a bit.

We had a pretty good five miles after that before we had to gybe the spinnaker over to the other side. Pretty much as soon as it was set, the wind arrived in earnest and we had to go about switching back to our normal white sails. Then we had to reef. Then we had to reef again. At least it was bright and sunny and we had great views of the coastal mountains for perhaps thirty miles in either direction as a backdrop for all of the work.

During our sail, we saw no other boats of any kind. Even coastal shipping, which we can usually pick up with our AIS receiver thirty miles out, was showing nothing other than the base station repeaters dotted along the coast. Usually, there was a ship going in either direction every four hours or so, but today, there was nothing.

We rounded sand spit at the northwest corner of the Fife Island and headed toward the recommended anchoring spot on the long, northern side. The wind was by then howling out of the east, which left us totally exposed there to the building swell. We elected to go back around the sand spit and anchor in the lee of the island on the skinny west side, where the water appeared to be smoother.

The bottom drops off more steeply on that side. As we approached, our depth sounder went: 23..22..21..20..4..3..2½. Aahhh! We dropped the anchor in the millimeter before we hit two meters and backed down to where Begonia was again floating seventeen meters above the seabed. Then we pulled like hell on the anchor to make sure it was set. Whew!

Once everything stabilized, we couldn't help but notice that there was just a wee swell wrapping around our side of the island. It hit us from the south while we were pointed into the wind, facing east. This made for a bit of uncomfortable roll that increased in intensity as the tide rose. Once our protective sand spit covered, our northbound swell crashed into the westbound swell we had come here to escape, making a jumble of pyramid-shaped waves that threw us around worse than being underway at sea. Stuff that never falls over fell over and then off of tables and counter tops onto the floor. By then, it was too late in the day to move. We knew we weren't dragging, so we would just have to hunker down for the night. We went to bed right after dinner because that was the only place that didn't require us to brace constantly to stay upright.

The next morning before we had even boiled the water for coffee, we moved back over to the north side of the island, hoping we could salvage our visit. There was some swell there, but only from one direction and we pointed into it, which was immensely more comfortable. Even better, as the tide fell, a mile and a half long wall of sand reared up in front of us and flattened the sea completely. Oh, that is so much better!

As low tide approached, we lowered the dinghy to head ashore. As soon as it hit the water, a twenty-five knot wind kicked up and churned the sea into froth. The wavelets were too small to effect Begonia, but getting from there to shore ended up being a wet, grueling row, making about a Begonia length of progress every five minutes or so. Oh, if only we had left twenty minutes earlier...

When we finally made it to the sand, my arms were so rubbery from the row that it took me a couple of minutes before I had the strength to help Maryanne drag the dinghy up onto the beach. Time to switch to using our legs.

The sand flats that expose at low tide run for 1.5 nautical miles from the tip of 0.3-mile long Fife Island to the far end. That's most of the way to the horizon. We had better get moving. We chased crabs and spotted birds and studied various shells we found along the way. All the while, we had to shout our musings to one another to be heard over the whining wind. We were hoping it had been a short-term squall, but it seemed to be here to stay. 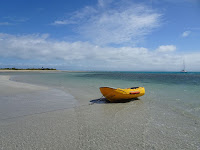 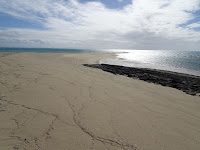 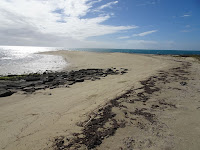 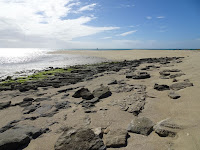 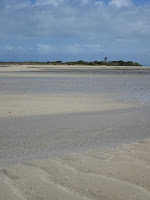 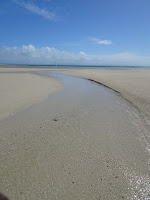 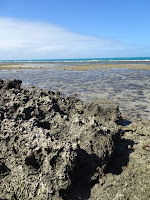 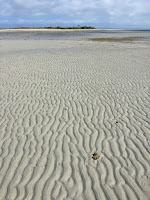 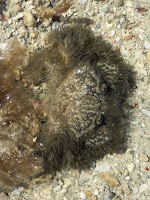 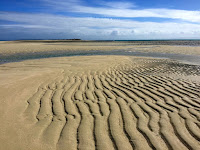 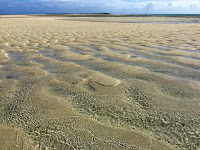 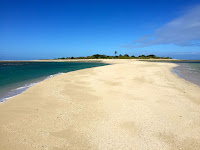 Exploring the beautiful patterns and critters at low tide (did you spot the "shaggy crab"?)

Back at the island, we did a counter-clockwise circuit, puzzling over various bird and crab tracks along the way. We never found any human tracks. Fife has a single palm tree towering over the scrub. Maryanne had a look at it through the binoculars when we anchored and reported that it was sprouting coconuts! We were looking forward to collecting a few for snacks, but the tree proved to be too far inland to get to through underbrush that was a little too thick. Damn! 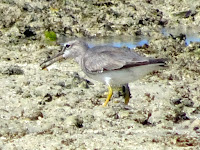 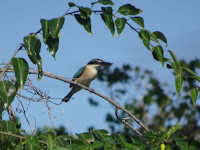 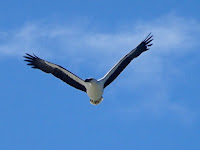 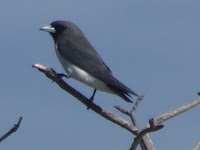 And then there is the bird life...
A sandpiper, sacred kingfisher, white-breasted sea-eagle and a satin flycatcher

When we got the the sand spit on the opposite, northwest side of the island, I elected to walk to the end while Maryanne stayed behind trying to scout out another path to the coconut tree (no luck). About halfway to the tip, I came across some interesting tracks and took some photos to show Maryanne. When I got back to her, I handed her my phone and showed her what I had found.

”Ooh! Must be some kind of lizard”

I scrolled to the picture with my hand by one of the footprints for scale. They were both about the same size.

”Maryanne, what would a goana be doing crossing from one side of a sand spit to the other?”

That's when it hit her. Crocodile. I actually found two sets of tracks. One going in each direction. As I was describing them to her, we both came across a third. They went from the water into the high grass behind the beach and then back to the water. The tracks looked to be about the same size as the others. The animal was about as wide as me. I guessed it was probably a meter and a half long. They can grow to seven meters, so our little guy was only cause for slight to medium concern. 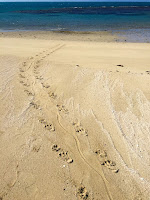 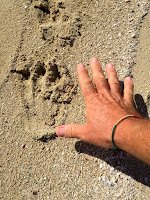 Croc tracks - a small one!

Further on, we found a fourth set of tracks. These led into the grass, but did not lead out. Aw! I wonder if the little guy is still in there. Let's check.

The dinghy ride back to the boat was so much easier than going to shore. I only had to row twice to get lined up and then let the wind do the rest. Maryanne kept asking me why I was dawdling. There were crocs out here! 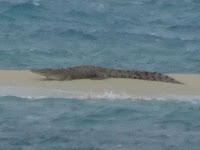 An hour or so later, he was gone. The tracks went down our side. I guess that takes a refreshing afternoon swim off of the table.