[Kyle]Next up on our push northward was Blanchard Reef. Unlike our previous few anchorages, Blanchard does not uncover except for just a tiny bit at the lowest low tide, which we did not experience. With it being as windy as it had been in the past few days, we weren't sure if the anchorage on the lee side of the reef would even be tenable. To hedge our bets, we left early enough to proceed to the following stop in the event that we didn't like it.

We had plenty of wind for the short sail, which spared us the hassle of even unbagging the mainsail. More wind was coming in from the east and it brought low clouds with it. By the time we arrived at the Blanchard, the seas were frothing, the wind was howling and the skies looked like they would open up and soak us any minute. Yuck!

It was still rough, but a little less so behind the reef, which we could just make out as a change in the color of the water ahead. The tide was about midway through its range, so we decided to set the anchor and see how it felt.

It wasn't bad. It was certainly way better than the west side of Fife, supposing we decided that was the bar we wanted to clear. We still had a few hours before it would be too late to move on, so we decided to wait and see. When our time came, we decided to give it a night. 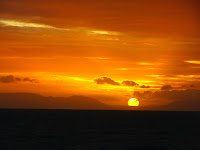 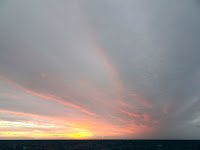 Lovely skies around sunset from the boat

It howled all night. The winds were blowing about twenty-five. We saw one gust of thirty-six knots. After we made it through high tide, things gradually smoothed out and we awoke to an only slightly sloppy day. The sky was still low and gray, which made us feel fine about sleeping in.

After being awake for a couple of hours, we started thinking about swimming on the reef. Maryanne decided she was still nervous about crocs, despite the fact that they were less likely to be at Blanchard because there was nowhere there where they could haul themselves out and warm up in the sun while digesting their human.

I decided I had already had a good run, so why not? She remarked that at least it would be a more interesting way to go than peacefully in my sleep. We agreed she would stay behind to take pictures for the insurance company. It's so much easier to file a claim when you have pictures.

The first sign of trouble when I went in was that the water was murky. From the back of the boat, I couldn't see the front of the boat. I tried following the chain to the anchor, but I couldn't make it on one breath. After surfacing, I was never able to find it again in the murk to make it the rest of the way to the anchor. At least I figured out the bottom was flat, clean sand. I thought about heading back and calling it quits, but hey, I was already out here. Might as well see what there is to see.

I swam the ¼ mile upwind to the reef. It was about the usual, populated with the usual characters, but the visibility was making it hard to make out much more than my immediate vicinity. Of note was that I didn't scare up anything larger than a parrot fish – no sharks, no rays, no turtles. That was reassuring, although Maryanne is always pointing out that it's the one's you can't see that you need to worry about. 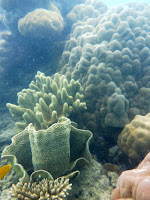 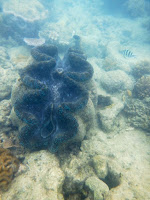 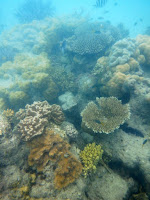 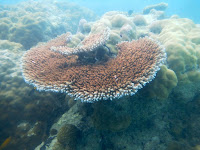 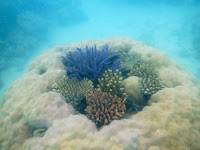 Since we were weary of getting bounced around at anchor, especially at high tide, we decided to move on to where we could hide behind some land.