[Kyle]Our next planned stop was a day's sail away at another Ingram-style reef called Clack Reef. It was a picture perfect day for sailing. We did the whole thing in smooth seas using our backup (now primary) spinnaker. Our only real hitch was that the wind forecast was calling for strong winds in a couple of days. Ingram had been a little uncomfortable as the swell wrapped around the island at high tide and we were worried Clack might be worse. We decided to change the plan and divert instead to nearby Stokes Bay at Stanley Island, which looked like it would offer better protection. 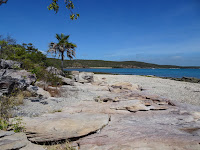 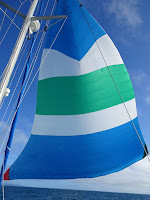 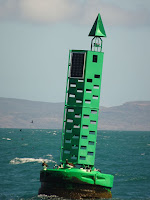 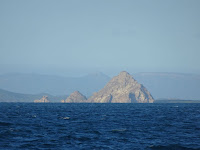 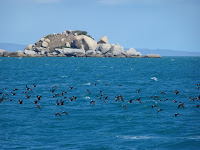 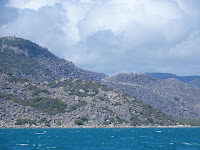 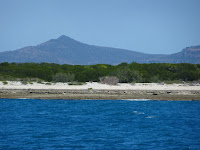 Sailing north along some distinctive coast

Our sail took us past Cape Melville and into Bathurst Bay. In the eons since this part of the world was Gondwanaland, Cape Melville has eroded down to what appears to be an improbable jumble of large, rounded boulders that seemed to have tumbled down from nowhere. Since passing north of Cooktown and especially Lizard Island, we have entered a very remote and uninhabited part of Australia. The few roads on the maps are in fact, mostly just seasonal 4WD roads to part-time encampments.

On its face, this seems illogical to me. The northern end of Queensland is by far the closest part of Australia to an enormous contingent of the world's population, most of which is in the Northern Hemisphere. New Guinea is up there as well as the Philippines, Indonesia, China – LOTS of people. It seems like it would be natural to settle there.

But, of course, that's not how it happened. As far as we know, the Aborigines arrived a LONG time ago and since then have not found it necessary to backtrack off of the continent. The second, Western wave began its colonization from Botany Bay, which is in the more temperate, agriculturally fertile corner of the country, way down South. Thus, most of Australia's big population centers, Sydney, Melbourne, Adelaide, Perth, are in the far, southern half of the continent, far away from all of that stuff up north. I guess they figured that they have already come so far, What's an extra thousand miles?Plus, until recently, they have had an official immigration policy that tended to, ahem, discourage people from the nearest populated regions.

The weather can also be a bit of a challenge. Tropical Queensland has but two seasons: Dry and Wet. The Wet is during Tropical Storm season. The area gets so much rain then that through-roads are regularly flooded, cutting off whole regions for months. Thus, Queensland north of Cairns is pretty much the Tropical Outback, where any signs of technological humanity, such as roads and power lines, are very few and far between.

Stanley Island lies in Bathurst Bay. It is fairly large, with a high ridge shielding the anchorage on the northwest side from the wind. A bit further to the south, we saw two commercial fishing boats anchored off of the tip of the island. This sole reminder of humanity would leave at dusk each night and return at dawn after a whole night of fishing. If we ever stirred at night, we could track them by following their lights near the horizon. Since we figured they spent their days sleeping, we had no other contact with them.

From our position at anchor, we couldn't see a whole lot to do ashore. The nearby beaches were small and through the binoculars, I couldn't see any signs of a trail or any other way inland from there. Still, we thought that going ashore would offer a nice diversion.

By the time we finally got around to it, it was almost low tide. That was good because low tide can make for some good photos. It was also bad because it made getting ashore a bit of a challenge.

The tide was low enough that it had gone below all of the sand on the beach and was starting to uncover vast mud flats interspersed with coral. This was a particular problem because Stanley Island was clearly listed as a croc area. These ambush predators are well known for laying in wait in ankle-deep water. Our path ashore required us do leave the dinghy and wade through a hundred meters if mud interspersed with rocks that suddenly all looked like lurking crocs.

We made it safely ashore and, brandishing a long stick each, we headed to the end of the beach. We looked hard, but found no croc slides, so we braved the grasses fronting the sand, using our sticks to beat a clear path through to the following beach.

We repeated this process a few times until we emerged at a long stretch of sand that went on as far as we cared to go. We knew it would be a while before the tide fell and then rose back to the level of the dinghy, so we kept walking further and further in the midday heat until reaching a sensible turnaround time. We saw lots of interesting geology, but there were few animals out cavorting to entertain us. 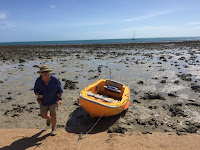 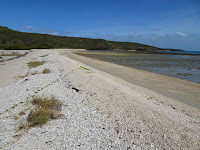 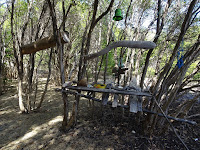 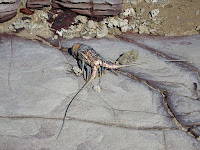 Ashore we found a cruisers corner, and a host of spiny-lobster carapaces 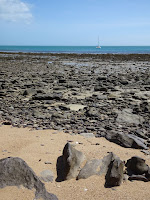 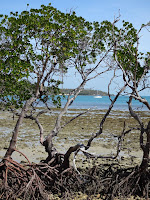 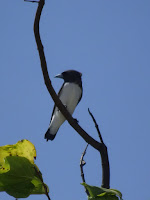 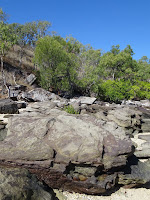 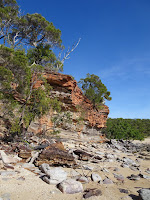 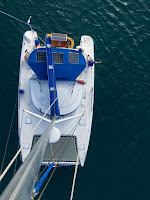 We got back home just as the fishing boats were leaving of the night. They started work while we were winding down for the day. I awoke the next morning while they were still out there, but getting closer. By the time they had set their anchors, we had pulled up ours and were on our way to the next place.