[Kyle] We Started off this morning with everybody else (although they all seemed to get up later than we did) and headed through the Alligator/Pungo Canal. It is another canal like the Dismal Swamp that is 20 miles of perfectly straight lines with a nine degree bend in the middle just to keep us guessing. It is much wider than the Dismal Swamp Canal so it was possible for boats to be two or even three abreast without one of them worrying about knocking off tree branches. Whisper, the other Gemini, passed us when we were still warming up the engine. They got about 600 feet ahead and we spent the next three hours passing them at a rate of about 3 feet per minute. I honestly thought we'd be the slower boat being all loaded down for a month at sea and all. Such a small difference could have been caused by anything trivial like a dinged prop or slightly smoother bottom paint.

We made it to the other end at the Pungo river and once out of the protection of the trees lining the canal the wind came up and we were able to go sailing again. We had a marvelous downwind sail the whole way to our anchorage on Eastham Creek about 25 miles later. It was cold again but by midday it was nice with warm clothes on. I had a real crisis of conscience when I realized that I had nothing to complain about. The weather was beautiful, the wind was behaving, the boat was going really fast, I was well rested and well fed. It was horrible! What's a grumpy old man to do? Maryanne and I both searched in vain for something to be upset about but there was nothing. Finally, a huge motor yacht came by and threw us a huge wake just as we were trying to gybe (look it up!). I felt like my old self again to be shaking my fists and screaming obscenities at the bastard. Emergency no longer in progress. 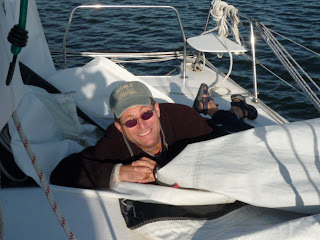 Kyle "helps" repair the sail
Our anchorage is pretty, although very marshy (so far the whole state is marshy) Luckily it's windy and cold so no bugs to battle. We spent the afternoon putting a precautionary patch on our jib and changing the engine oil. Maryanne is making a really nice smelling dinner. Yet another Gemini is anchored next to us. We've waved at them, but so far no response. We'll see whose faster in tomorrow's canal.
Posted by SV-Footprint at 6:04:00 PM

Email ThisBlogThis!Share to TwitterShare to FacebookShare to Pinterest
Labels: USA-ICW

Hi from Pete at Beach Sports.
It's good to see that a windsurfing part is now part of a boat.. I have been that way before with our boat, but had to go by way of VIRGINIA CUT.
Fair sailing
SV Loreley Pete & Ute

"Old Man Shaking Fist At Clouds" eh, Kyle? If you had a lawn, you'd be screaming at kids to GET OFF MY LAWN. You know who that sounds like??? Yep....